These new poems by Meena Alexander, taken from her chapbook Impossible Grace (Centre for Jerusalem Studies, 2012), give us a portrait of an Arab Jerusalem. Alexander had written the poems from this book when she was poet in residence at Al Quds University, Jerusalem, in 2011. The whole cycle of Jerusalem poems will be part of her forthcoming book Birthplace with Buried Stones (TriQuarterly Books/ Northwestern University Press, 2013).

The poem from which the book takes its title was put to music by Stefan Heckel, and was performed in Jerusalem at Al Quds University by an ensemble of Palestinian and international musicians in October of this year. Heckel was the winner of the Al Quds Music Award, for which the poem served as basis.

The Jerusalem that we find in these poems is one that oscillates between the realm of the sacred and that of the profane, between the eternal world of mythology where existence is always repeating itself into meaning, and the finality of a life that ends when a body is no longer viable, when physical heart and physical breath stop.

Perhaps it is the inability of these poems to reconcile these two realms — as each competes with the other for our allegiance — that is what is impossible about the grace that these poems describe.We could say that these poems circumambulate a grace that cannot be achieved here: here where heart and breath are not metaphor, but bodily organs.

In the poem "Nocturne" for example, Alexander asks a question, and in doing so she takes up a typical poetic register: it is the ephemeral muser, the childlike finder of 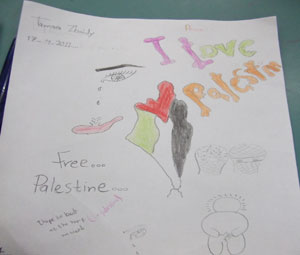 meanings in the things that practical, responsible life overlooks: "Does Haifa have almond blossom" she wonders (and note the absence of the plural in "blossom" turning the blossom from out of its singularity into a poetic institution — the sacred). "Must they gather it from the edges of the sea," she continues. The response however, comes in the next line and it casts aside this poetic voice:

"Someone was shot point blank and killed— "

Clash of the sacred and the profane. The report of the gunshot forces the almond blossom to withdraw, its delicateness, its ephemerality suddenly ridiculous. But which is more important? The sacred or the profane? That which stays amidst all the change? Or the thing that changes and in changing only exists once?

In the next line we learn who it was who was killed: "A man who kept waiting for the good life to occur, / For the mouth to speak what comes before speech." This speech before speech: the long celebrated inarticulateness, sacred to poets. But what if this emptiness is not a poetic emptiness, but the emptiness of a future never to be made speech? The thud of speech stopping, not to be taken up again. Can we still celebrate it? Can there still be poetry?

This selection of poems is marked by these questions with the wrong answers, these irreconcilables, these clashes of register. - By Noam Scheindlin

We have come to Haifa where the sea starts.

The theater Al Midani floats by a tree.

I see this clearly though a dark filament twists round the moon.

I tiptoe through surf --

A rope someone left at the end of the jetty

I knot it to my ankle,

Not wanting to be swept away by sudden longing.

Inside the theater, candles, a mountain of bloom.

Does Haifa have almond blossom?

Must they gather it from the edges  of the sea?

Someone was shot point blank and killed-

A man who kept waiting for the good life to occur,

For the mouth to speak what comes before speech,

Sap in the tree and firmament of flesh.

A child approaches me in the darkened theater

And whispers in my ear -- Yes we are waiting for Godot -

I am overcome by the scent of tuberoses

And cigarette smoke and can't reply --

Yes, many friends of the dead man are smoking.

Six or seven take turns reading from a poem

They pass the pages from hand to hand -

I left my gloom hanging on a branch of boxthorn

And the place weighed less.

A woman in black jeans forces open the windows

The moon uncorks herself and blows away --

So this is how the sea starts: increments of longing,

Mostly in half darkness

Then a white light as waves rush through.

In a twelfth century courtyard,

A woman in sweatpants,

By her, a parrot in a cage.

By the cage stones shift.

See this foot? She lifts up her heel.

Imagine that, stones where a saint knelt,

Baba Farid, you know him, yes?

We buried grandmother in her dress of flames.

I keep her chain, always

She pointed a foot -

On the ankle, under a loop of gold

She fastened the stiletto shoe,

Against a parrot's cage.

Shadow hopping on a heap of stone.

Take pride in my flesh,

We are strangers to this life

She veils her face

Then rips it off, goes on talking -

A dragonfly on a pile of green almonds

Water in our taps

Turning the color of burnt salt

In the night sky over Jerusalem,

By the leaking gas station

On the road to Abu Dis

Spray painted on the separation  wall

I heap flowers in a crate

The color of your eyesbefore you were born

And your mother brought you to Damascus gate.

It floats through New gate

Of the beardless boy-soldiers.

From the torn flagstones

My hands the color

Of the broken houses of Silwan.

Led me to the fountain.

Where rooftops ring with music

I glimpse your face.

You have a coat of many colors -- impossible grace.

These poems were originally published in the following journals: "Nocturne" in Guernica; "Cobblestones and Heels" in the Kenyon Review and "Impossible Grace" in TriQuarterly Online.

Image 1: The security wall separating Israel from the Palestinian Territories, near Bethlehem.

Image 2: A child’s drawing given to Meena Alexander during a visit to a Palestinian school.

Meena Alexander was  born in Allahabad, India. She is considered one of the finest poets of her generation. In 2011 she was poet in residence at Al Quds University and lived in the walled city of Jerusalem. During that time she wrote this cycle of poems. Her poem 'Impossible Grace' was used as the lyric base for the first Al Quds Music Award. She lives in New York City where she is Distinguished Professor of English at Hunter College and the Graduate Center, City University of New York.