Every morning on my walk to work, I lift my eyes at the top of a long, sloping hill, and check the flagpole. Since I got back to work this fall, the flag has never risen above half-mast. Charlottesville, Harvey, Irma. These are the official reasons. But we could all add our own. DACA. Carbon levels. A President who may have taken office through treason. New troops being dispatched for the longest official war in U.S. history—and this for a nation at war for two hundred twenty-four of its two hundred forty-one years. Even that number avoids the longest unofficial U.S. war: the war of white supremacy. The flag has never taken account of that war’s casualties. It does not ask us to speak their names.

With My Mother Was a Freedom Fighter, Aja Monet takes up the project that the flag refuses. Situated firmly in the ongoing chaos of the present moment, she offers an extended meditation on what it means to be human in a brutal world. She asks this timeless question with urgency and a striking new voice.

Monet’s first written collection opens with an image, familiar to all those who count ourselves readers, of “a little girl...reading aloud/in the middle of a dirt road...a room full of listening.” Then, immediately, she fractures this easy identification. The second poem, “language frontiers,” confuses us with its alternative grammar and chaotic visual arrangement. We are forced, quickly, to make choices: to read up or across, to choose lines or columns, to rely on old standards or open ourselves to alternatives. Monet tells us, “these words are something other than you/reading them, i speak like i got a right to say/something like my life depends on it/if it can’t be spoken it ain’t worth writing.” This life-or-death articulation requires more of its readers than the easy pleasure of beautiful art. It is not enough to be aware, not enough to watch. These poems require activity. They insist that we engage. Through the rest of the collection, Monet extends this lesson to the politics of war and resistance: it is not enough to know, she argues, or to write. We must also speak. We must also act.

Monet’s battles lines are entangled and intersectional, indebted to the early Black feminist tradition. We meet her as a young Cuban-Jamaican girl in East New York, an urban space where cops and an abusive mother form a united front of violence. As she grows, she reckons with racist, institutionalized brutality, and confronts America in its blunt failures. Watched over and interpellated by an older self, she raises questions of motherhood, daughterhood, women’s divinity, and place, cataloguing the survival strategies of the women around her: her grandmother’s Santeria, chicken blood dripping “from her wrists like syrup”; Aunt Maddy’s cigarettes and crucifix; her parents’ “disco and latin freestyle...the cool jazz of their joy”; Tanya Kaufman’s “way around the system,/just ask the right questions/never take no for an answer.” The heart of this section, buried between explorations of feminine mysticism, is “limbo”: 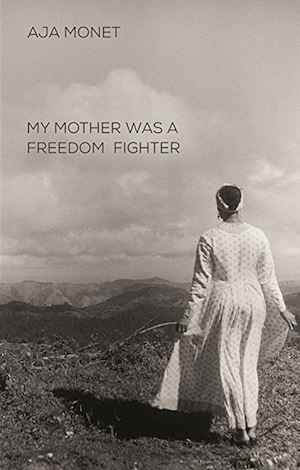 i saw a young boy die once
like an ant, he disappeared
beneath my finger
behind the window
on the 17th floor

i watched his circulating tissue
soak the pavement…

i hope the boy knew
this wasn’t heaven...

in heaven there is no need for blood

From this experience, as much as from her foremothers’ different wisdoms, she establishes an understanding that grounds the rest of the book: “i used to think we were human/beings that had spiritual experiences/there was something about watching a boy die/i realized we are spiritual beings/with human experiences.” After this moment, the book illuminates the divinity of everything, glowing behind the grimy details of human cruelty—a photo-negative of brutality covered by a flag.

But Monet’s struggle is not bounded by national boundaries; it is not provincial. She begins to move, taking us away from New York to France, to Tehran, to Palestine. As we travel, Monet, a Black Lives Matter activist, builds upon the #sayhername campaign with a poem and a series of dedications. Facing off with the flag, she lists people to mourn: Fahd, Neda Agha-Solatan, Hamid Panahi, Umm Yasin, Mahmoud Darwish, Nehanda Abiodun, Assata Shakur. Monet’s genealogy is global, dark-skinned, and (sometimes fatally) wounded; including these debts here is partly gratitude and partly activism. You will learn these names, Monet insists, if you want to understand anything. You will add them to your litany.

At the same time, Money balances targeted clarity with intentional obscurity. Speaking once on the concept of solidarity, she said, “If I have to get you to see me as you in order for you to affirm my right to exist and my humanity—this is not solidarity...to honor one life does not negate another.” Hewing to this moral code, our vision as readers in Palestine is strictly curtailed. We are not taken as tourists, not treated to the battered vistas of other lives. Nor are we taken for any easy moral outrage, any facile identification that could at once rouse and slake liberal guilt.

There are just two poems of violence in Palestine. In one, Neda Agha-Solatan dies from a gunshot while the poet’s voice sings her through death; in the next, Umm Yasim, the mother of a poet, feeds the “displaced, black, and american” poet while recounting the story of her miscarriage at the hands of Israeli soldiers. Both poems are devastating.

And then Monet pivots. She turns her focus from external violence to self-interrogation, rigorously asking why she is in Palestine and what she can do there. She is as unsparing with herself as she is with her readers:

privilege is a mask no one wants to take off…
privilege is knowing
there are parts of this earth occupied for your leisure
your convenience, your entitlement, your tourism…
becoming a gaze…
privilege is writing a poem
a bulldozer of bodies crowds through
empty streets in Ramallah, a mother holds a weeping
mutilated daughter

In this analysis, Monet performs a reckoning rather than an evaluation. She does not rank injustices or root her own outrage in empathy. She is American and privileged; she is black and endangered; she is, like everyone she introduces us to, shockingly and starkly human: “i am the sort of animal that needs to be held,/ruins the hold.”

She is also a poet who, in an overwhelming historical moment, both respects and doubts her tools. The midpoint of the book wavers between hope and despair. Monet admits “i got all the ways of talking about the problem/but no way to make solutions." She cries that

how we see ourselves
is determined by five western countries
five of which determine
value by how well they kill
others.
and we out here screaming
black lives
matter…
i am starting to believe
that this is all we value
is each other’s death
more than life

At the same time, she finds and speaks hope. “black joy,” one of the most moving poems in the collection, is a celebratory, haunted, catechismic ode that ends in a promise: joy “is together, unified on the frontlines/our joy will astonish the world cuz joy/true joy/is justice.” It is a vow made willfully, against all odds.

In its third and final section, the book re-centers itself, halting international travel to consider the overwhelming human need for love: self-love, divine love, mother love, and finally romantic love. Like “a small luxury,” a starkly honest poem about the unusual indulgence of a massage, Monet’s poems to Umi Sellah serve as retreat without withdrawal. These careful, quiet, twilight poems are still and safe, but they don’t negate the realities of power or the battle requirements of the outside world. Love, Monet calls it, “what a word. how do you define/a word that is so often laughed out/of a room? without it, i’ve seen/the strongest weep, bend, break.”

Earlier in the collection, Monet witnessed even as she questioned its purpose: “the world/i used to think i could save it/but i grew up on a block/where it was easy to fall/through the cracks in the pavement/i earned my poetic license so i could say shit.” She witnesses “black people…on eyeballs/of newsfeeds…the massacre”; she witnesses “a cop…mouthing off his tongue/to my brother…like my brother wasn’t/a skyscraper or something/like he wasn’t/the bridge that led to boroughs/like he wasn’t/my hero”; she witnesses “a soul, sold, lingering on wires/like converses between telephone poles.” But this witnessing gains a new depth when we see the tenderness that veins the anger. Monet carries readers on a journey from brittle rage to rooted resistance, using her poems to connect with her readers by sharing humanity and love, building a bridge that is also a well. Refreshed and with an army of readers united behind her, she closes the collection with a battle hymn for these “daughters of a new day,” back on “the streets, picket signs in our blood, our ancestors/marching through a nightmare, we rise toward freedom.”

Anna Ziering is a PhD student in English at the University of Connecticut. She holds an MFA in Poetry from Boston University. Her work has appeared in publications such as The Rumpus, The Slag Review, and The Skylark Review, and with Little Lantern Press and Indolent Books. She teaches at the Kenyon Young Writers Workshop.