History records that when Mahatma Gandhi raised a handful of salt in 1930, he shook the mighty British Empire. But history, as we know it, has a way of overlooking revolutionary women. One such woman was Kamaladevi Chattopadhyay (1903-1988).  Not many know that women were not supposed to have a role on the frontlines of the salt march. A “flabbergasted” Kamaladevi, who had “built up a whole edifice of hopes of involving women in this great adventure,” eventually persuaded Gandhiji to call upon women to march with him in defiance of the British salt tax. What happened next is well-known. The Dandi march sparked a massive civil disobedience movement that turned ordinary men and women into freedom fighters.

There’s a lot to learn about, and from the life of, Kamaladevi from the new book A Passionate Life, published by the feminist Indian press Zubaan Academic. The book contains Kamaladevi‘s long-forgotten writings as well as essays by scholars eager to revive her life and legacy. Reading about Kamaladevi, it strikes me that today she would be known for intersectional feminism, someone who naturally connected women’s rights with other movements for political freedoms and social justice. 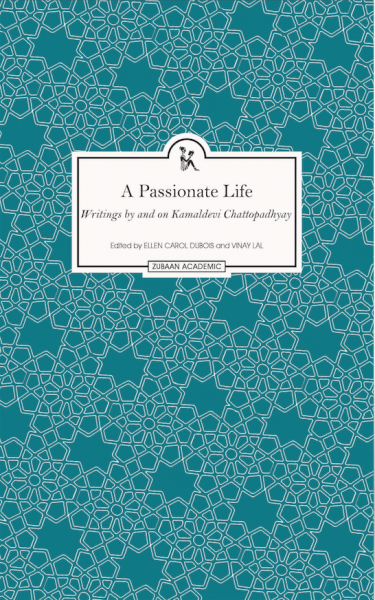 Kamaladevi was a woman who wore many hats. She was the freedom fighter who went to prison for civil disobedience. She was the internationalist who forged friendships with feminists like the American Mary van Kleeck and the Egyptian Huda Sha'arawi. She was the diplomat who outmaneuvered superpowers to make the right to self-determination a human rights issue at the United Nations. She was the “colored woman” who refused to budge from the whites-only section of a segregated train in the American South.  And, as many Indians do remember, she was the proponent of tribal and village handicrafts in independent India, establishing institutions like the Central Cottage Industries Emporia.

Kamaladevi embraced Gandhian tactics well beyond independence because she saw in his methods, like home-spun clothing, a way to reach the poor, preserve traditions, and protect the planet. In 1986, reflecting on puppet theater as an art form to inspire action on environmental issues, she wrote: “Man’s concern for the Earth is no passing fad; it is one of the most urgent problems which we face today and will continue to face in the foreseeable future.”

One suspects that by then, she was concerned not with colonial or fascist powers, but the modern state itself. Post-independence, Indian economic policies have, more or less, aimed to catch up with industrialized economies. Tribal populations are generally seen as rebels against this model of development.

Given Kamaladevi’s multi-faceted life, it works in the book’s favor that its two editors, Ellen Carol Dubois and Vinay Lal, both UCLA professors of history, come from different backgrounds and perspectives. Dubois, a historian of American feminism, reflects on the question that will puzzle many: why did Kamaladevi not self-identify as a feminist? Dubois suggests that, among other reasons, her distaste for the feminist moniker may have to do with feminism’s strong association then with suffragists of the Anglo-American world – imperialist, from Kamaladevi’s perspective.

Be that as it may, where she stood on the question of women’s equality is clear from her political, social and personal life. Kamaladevi was the first Indian woman to ever run for political office. In 1926 (the British had allowed limited political rights by then) she narrowly lost a seat in the Madras Legislative Assembly. It’s also remarkable that she, a lifelong Gandhian, stood up to Gandhi’s peculiar form of patriarchy. She saw opposition to birth-control as man’s “desperate attempts to thwart women’s efforts” to achieve social and economic freedoms through “religious cannons, legal statutes and social codes.”

Kamaladevi herself had one son, so one can assume that her personal choices were in step with her political positions. There are other, more telltale, signs. She was a child widow, who did the unthinkable by remarrying under civil law. She did the unthinkable again when she divorced her husband (a brother of the more famous Indian woman of that generation, Sarojini Naidu) after that relationship turned sour.

Reading Kamaldevi’s writings one realizes that she saw in India’s freedom struggle an opportunity for women to reclaim the rights she believed they enjoyed in ancient India. “Such social disabilities as purdah and child marriage were entirely unknown’, she wrote in 1929 of the Vedic and Puranic periods.

So what would Kamaladevi say about today’s India with its hyper-masculine Hindu identity? The Narendra Modi government’s hallmark is Hindutva, an ideology that smothers cultural and religious diversity and restricts women and minority rights. Kamaladevi, who had expressed dismay that women’s awakening in India did not sustain its momentum after independence, would have been deeply troubled today.

But she would neither be silent nor still. The book’s co-editor Vinay Lal, a prolific writer on the political and legal history of colonial India, Hinduism, Gandhian philosophy, and Indian cinema, recalls how four years before her death, Kamaladevi, as “a social worker from Delhi,” petitioned the Supreme Court to secure the release of Sikh women and children who were being held in Punjab’s prisons in 1984. She argued that they were ordinary pilgrims who happened to be visiting the Golden Temple in Amritsar when the Indian army stormed it, in its fight against Sikh separatist militants. She managed to secure their release.

Kamaladevi was a resourceful woman who grasped that women’s rights, religious freedoms, environmental justice, political independence, and civil rights were not single-issue movements. Now more than ever, as the space for these movements shrinks in India and elsewhere, we should not let this one be forgotten.

Reviews by Asri Saraswati
Through the sieve of dry grass walls: Indonesia's Sitor Situmorang
Reviews by Sneha Khaund
The Personal is Political in Assam's Insurgency
blog by Warscapes
Questioning Racism in the Indian Diaspora: Cultural Perspectives
Literature by Robtel Neajai Pailey
This Is Our Country
Reviews by Samadrita Kuiti
Queer, Digital, Indian, Neoliberal?
Reviews by Arpita Mandal
Nation as Parent in Netflix's Delhi Crime
Reportage by Belén Fernández
Exile: Rejecting America and Finding the World
videos by The Polis Project
Zillah Eisenstein on Liberal and Neoliberal Feminism
Poetry by Uzma Falak
The Last Call: Audio Postcards from Kashmir
Opinion by Ikram Ullah
A Century in Defiance
Like any of the articles? Support our work.
Donate Now