A man stands in front of a building with his hands in a giant V — it’s the kind of pose seen in tourist snaps in front of the Eiffel Tower or the Leaning Tower of Pisa. Only the building has collapsed. Rubble is spilling onto the street. And the air is filled with dust.

This was perhaps the first disaster snap of Ecuador’s earthquake. But it would not the last.

After a 7.8-magnitude earthquake hit Ecuador on April 16, much of the country’s coastal region was devastated.

Now, the Ecuadorean Ministry of Tourism is pushing for people to return to the coast. TV and radio campaigns sell the earthquake-wrecked towns as ideal tourist destinations, complete with cheap food, low-cost accommodation and good weather. What’s more, it’s a question of solidarity.

Supporting local business, the government says, is the best way to help with the recovery effort. And as one radio host says, “you can’t live in fear.”

Tourism makes up some $1.7 billion dollars of Ecuador’s largely oil-dependent economy, a sum the government is eager to keep, particularly with the global fall in oil prices. But it’s a hard sell. Since the earthquake, there have been over 2,000 aftershocks. Many people, understandably, are reluctant to spend a few nights in a bamboo hotel by the beach where nearly 700 people died and many more were injured.

Canoa, one of the hardest hit beach towns, is desperately trying to recover.

Reggaeton blasts from the few beach bars that are open. Hotels have eager “Yes, we have rooms” signs, and locals roam optimistically with piles of hats on their head, looking for a sale.

But one block away families live in UN refugee tents, and what were once homes are now empty blocks of land or half-standing shells. There are playing cards scattered in the rubble and dogs scavenge in the wreckage of collapsed buildings.

A man wanders the town's malecón, selling hats and sunglasses.

Even so, tourists are slowly coming back to Canoa. But not all of them are there to support local business, says hotel worker Liliana Castillo.

“There are two kinds of tourists,” she says. “Some come because they really want to help out. They spend a few nights and eat out. Others just come for a night or a day. They take photos and leave.”

Castillo works at Hotel La Vista, a three-storey hotel opposite the malecón. After the quake she saw business drop so fast that it virtually disappeared. While they are now receiving more guests, at $25 a night — the standard rate for Canoa — the hotel is still struggling. The restaurant has closed and the front garden is still piled with wreckage.

When asked about how she feels about people taking photos, she shrugs, “they’re not really helping.”

Sandy, an Australian-English expat, who lives in Canoa agrees. “You can tell them a mile off,” she says “They come out with their big cameras and their massive lenses, then get back in their cars and drive off.” According to Sandy, in the weeks and months after the earthquake, buses of people from neighbouring towns came to take photos. Others came in private cars and headed off after a few quick snaps.

“The problem is no one has any money,” she explains.

“A bus came here from Napo. They took pictures and went down to the beach but they brought their own lunches and didn’t spend a cent,” she says, rolling her eyes.
Sandy runs a small breakfast and lunch shop on Canoa beach, selling anzac biscuits and banana bread while the James Bond theme tune plays in the background.

Most of her business, she says, comes from other expats, a few foreign volunteers and the odd local. 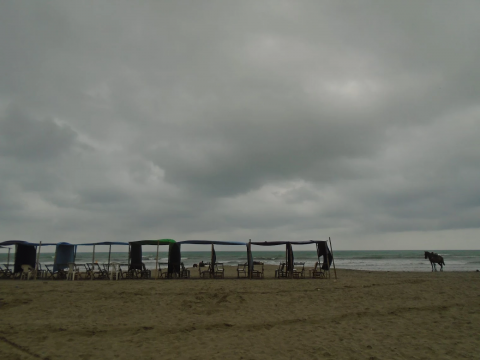 Canoa's tourism industry was devastated by the April 16 earthquake. The once-busy beach tents are deserted and horses stand aimlessly, waiting for people who want a ride.

But disaster tourism is not unique to Canoa. In the aftermath of Hurricane Katrina, New Orleans tour operators made $50 a tour taking people to the most damaged areas of the city. In New York, Ground Zero became a major tourist destination, luring people in with the chance to “be part of history.” In East Ukraine, a current war zone, opportunistic local guides offer a chance to see active fighting and snap shots of destroyed bridges and buildings.

But while it might be seem inevitable ... is it right?

Like poverty tourism to the favelas in Brazil, philanthropic tourism to villages in Africa, or even aid tourism to far-flung volunteer missions, disaster tourism raises uncomfortable questions about power and inequality. Tourists are in a unique position of privilege. They have the power, money and freedom to visit — then leave — a disaster zone, while locals act as objects of human tragedy, selling their misery to help rebuild their communities.

Philosopher Maximiliano Korstanje goes so far as to argue that disaster tourism, or “Thanatourism” as he calls it, is part of a new order of society — one where death is the most valuable commodity. In the book The Rise of Thana Capitalism and Tourism he argues that people consume death as entertainment, be it in action films or through real life experiences, like those provided by visiting a disaster zone or “traumascape.”

Those who defend disaster tourism argue it boosts the local economy. But this has not happened in Ecuador. Those who want to see the wreckage visit and leave  — without, as Sandy explains, spending a cent.

Others argue disaster tourism helps a community heal, allowing people to take control of the trauma narrative and build a new cultural identity. But in Canoa, the town wants to return to its former fun, surf-loving self. Disco lights flash next to destroyed beach huts, hand-painted signs advertise two-for-one cocktails despite the lack of customers, it is a pantomime of what it once was.

For the most part, disaster tourism benefits the industry — not the locals. Because there’s money in it. For around 3,500 pounds, UK-based organisation Disaster Tourism will sell tourists the chance to chase tornados in the midwest, re-enact the Hudson River plane crash and take in the fallout from the Chernobyl nuclear power plant disaster.

For a higher price, there are “bespoke disasters.”

“Do you have a unique disaster related experience yearning to be quenched?” the organisation asks. “How about skydiving in Afghanistan, or helping extinguish a bushfire in Australia?”

Of course not all disaster tourism is so lurid or obvious. In Canoa, no one is offering guided tours. Buses may come every few days with people from nearby towns –– and their sandwiches — but it is mostly innocuous curiosity seekers. After all, curiosity compels people to travel all over the world — and not just for disasters. 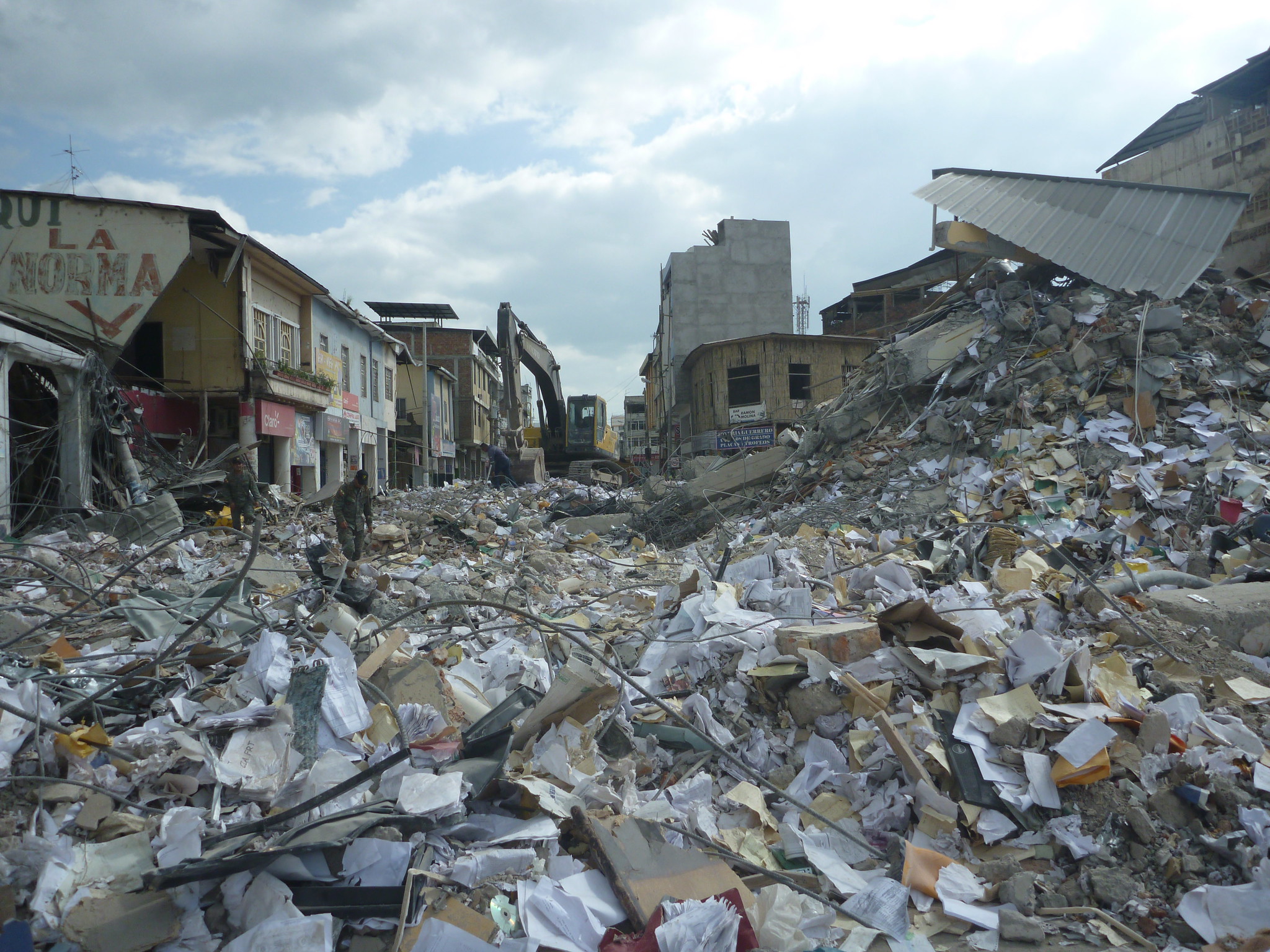 In Canoa, there are also those who come — not to consume death or feel superior — but to enjoy a day at the beach. Outside Hotel al Mar on Canoa’s sea-shore is a young Chilean family. They have been in the town for three days. “My husband works in Quito and we came here a lot before the earthquake,” explains Nicole Menzel. It’s the first time we’ve been back and it’s quite a shock. But we wanted to come because they say that’s what the people need most.”

The family wanders past a series of abandoned, bolted up beach bars, past empty lots, to a small beachside restaurant. They don’t stop to take pictures.

Reportage by Naomi Cohen
Pelileo: The Ghost Town That Was Never Haunted
blog by Fabio Andrés Díaz
One Country, Two Peace Processes
Reportage by Sally Kantar and Suracheth Prommarak
10 Years After the Tsunami: The Moken of Coastal Ranong
Opinion by Rasna Warah
Sun, Sea, and Sex in a Time of War and Terror
Art by Suchitra Vijayan
Remembering Haiti Four Years after the Earthquake
Art by Jasbir K. Puar
X-Apartments Beirut: Moving Through the Colonial Architecture of Culture Tourism
Like any of the articles? Support our work.
Donate Now