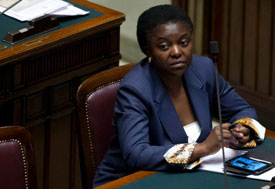 Since April 27th, when it was announced that she has been voted in as a minister in the Italian cabinet, Cécile Kyenge, Italy’s new Integration Minister and the country’s first black cabinet minister, has been the target of escalating racist attacks – from initial death threats during a visit to an area of Italy known for its anti-immigrant sentiments to the now infamous “Cécile looks like an orangutan” comment from the vice president of the Italian Senate, Roberto Calderoli. Just two days ago, bananas were thrown at the minister during a political rally. Other lesser-known insults came in Facebook posts from local politicians wishing her “to be raped” or indulging in crude photoshopped images in which the Kyenge is depicted as an orangutan. As I write this, two more episodes have been unfolding: Members of the Lega Nord political party exited the city council in the town of Cantu as the minister entered, while a man has been charged for threatening to welcome the minister “with firearms.” Amidst these overt manifestations of racism, Minister Kyenge has remained composed and released a strong official statement only yesterday.

Cécile Kyenge was born in Kambove, Democratic Republic of the Congo, and moved to Italy in 1983 to study. She became an ophthalmologist and started to be politically active in the cause of racial integration in Italy, promoting awareness and cooperation between Italy and Africa. Three months ago, she was elected to the Italian parliament. Shortly thereafter, she became the first black Italian minister.

This election has revealed a divided country in which the Italian political landscape has been immobilized by a void left by the Berlusconi years. In order to have an actual government, the leftist Partito Democratico created an improbable alliance with the Partito della Libertà (Berlusconi’s party). Cecile Kyenge is part of a cabinet born in  of the forced co-existence of these opposite political parties, in what is, ironically, being referred to as “the great coalition.” In fact, Italy has been revealed as a largely racist country, with a particularly parasitical strain pervading many aspects of Italian society.

A basic starting point for any analysis on these latest events has to be the uncompromising acknowledgement of Italy’s deep-seated racism. Concepts of African diaspora, colonialism, post-colonialism and neo-colonialism are largely ignored, along with Italy's own colonial past. Knowledge production in the country is almost exclusively driven by Eurocentric views. The link between personal and cultural identity with countries previously colonized by Italy is never made, let alone questions of dual identity or the realities of multiculturalism. 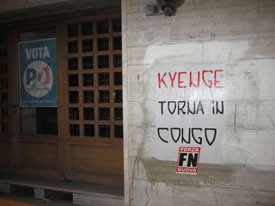 Italy simply does not have a language for diversity and “otherness.” Words like "negro” and "mulatto" are widely used by Italians when referring to black or biracial people, and not because of an underlying understanding of the etymology of the words, but rather because the social and historical implications are simply ignored, considered alien to Italian history. The persistent denial of the violence used in and inflicted on Italy’s African colonies finds a continuum in the latest racist episodes against Minister Kyenge, but also in a wider, descrambled campaign against “the other,” often referred to in Italian as "extracomunitario" (literally “outside of the EU”).

The underlying motivation seems to be an unwillingness to acknowledge the cultural shift: Migrants and Italians with roots in Africa, Eastern Europe and South America are now active participants in and citizens of the country, and important contributors to the national culture. In a conversation published last year between novelists Nadifa Mohamed and Maaza Mengiste, whose works hinge on Italy’s colonial history in Somalia and Ethiopia respectively, these questions rise to the surface with eloquence as each describes how Italians responded to their books. “There were two common responses: The first was from more left-wing Italians, generally a bit younger or with a special interest in Africa, who wanted there to be criticism of the Italian occupation of East Africa and who had knowledge themselves of the nature of colonialism,” said Mohamed. “The second was kind of blank-eyed, confused and really unable to assimilate what I was saying and writing with what they had heard at school and at home. A common refrain was that ‘[Italians] were good people – we were not racist like northern Europeans.’”

“No one wants to discuss the support Italians gave Mussolini and the Fascists when they first came to power, especially after the World War II ended so disastrously for the Fascists,” Mengiste added. “The colonial era is an ugly reminder of that compliance. But what I've also heard repeatedly from many Italians is the idea that they were ‘good’ colonialists.”

Thus by continuing to label immigrants and darker-skinned people with deprecating terms, Italians continue their long existing dismissal and denial of the brutality of their colonial past – turned, over the years, into "good colonialism" as part of the invention of an Italian tradition of "Italians, the good people." In fact, so pervasive is this particular idea that almost all coverage of the recent Kyenge debacle has managed to reinforce this in some way.

What was displacing about Senator Calderoli’s abhorrent “orangutan” remark was the total absence of a cultural and historical frame, often even within those condemning him. The analogy of “black: animal” in the Italian consciousness has a deep and painful root, as Flora Bertizzolo and Silvia Pietrantonio reveal in their study of colonial Italy: “The popular iconography of the ‘natives,’ so widespread thanks to some delightful Domenica del Corriere pictures, never shows Africans really working. Black people could be depicted in the white livery as autista, barista or cameriere (driver, bartender and maid) near the Italian family they work for, but for a comical purpose, just as a funny caricature, a masquerade of ‘animal’ dressing up like a human being."(1)

It is crucial to understand Italian racism within the larger context of the racial malaise that grips Europe. The coupling of soccer and racism in European stadiums is now to the point of being commonplace. The hurling of abuse at black players happens almost systematically in every match. Italian soccer superstar Mario Balotelli, while wearing the national team jersey, has to hear chants such as “There are no black Italians.” The same week as Minister Kyenge finds herself dealing with the Italian ahistoricism, the British government released a series of vans onto the streets of London emblazoned with an unsettling sign addressed to illegal immigrants: “Go Home or Get Arrested.” In Paris, in June, a pregnant woman wearing a niqab was assaulted and lost her child. Only a month later, a series of riots broke out when another woman was arrested for breaking the law that forbids wearing a niqab.

In Europe, Islamophobia and anti-immigration sentiment is not only common but, as in the case of the immigrant-baiting vans dispatched in England, dangerously beginning to be openly accepted as a powerful political tool. Institutional racism has become part of a new, streamlined language of violence and division. If in Italy we witness a deep aphasia, in the rest of Europe instances of racism seem to be part of a larger institutional frame that aims at politics of exclusion or forced assimilation into pre-conceived standards of whiteness and European-ness.

Professor Kali Nicole Gross, Associate Chair African Diaspora Studies University of Texas at Austin, she asked me a question which I believe is pivotal in unlocking these latest episodes: “I am also struck by how these images/acts are transnational. So much of the behavior and actions reminds me of the racism and bigotry that is displayed here in the US – historically as well as currently. Before, I attributed the style and approach to the history of enslavement in the US; but your piece makes me think about not just colonialism but also about globalization and the role that racism and the subjection of the ‘other’ plays therein. How easily translatable the images and tactics are; they fit into a global rubric about blackness.”

Europe is caught in a constant dilemma to define any space of action based on opposition. Inclusiveness is just not part of the discourse. From the Parisian laws to the English vans, all the way to the Italian fears, one thing seems to be central: the effort to produce a subculture of distinction and, thereby, to reinforce a neo-mythology of Europe. At best, Europe seems to hope for a post-black, post-racial realm, as opposed to receiving its complex richness as part of a new continent.

Is Europe sinking into institutional shortcuts and pre-conceived notions of the “other” that boost the “global rubric of blackness”? To what extent is racism not just a localized disease, but rather a tool for the construction of identities in Europe? It is time to start to build a new sense of critical citizenry, one that does not fall into the traps of the invisibility of history or the emergence of institutional racism. A sheer relentlessness in addressing episodes of racist violence and vulgar disparity and ushering in a new age of curiosity would be the simplest of tools by which to go beyond a pervasive culture of exclusion and passive acceptance. As bell hooks, the American author and activist, has said: “All our silences in the face of racist assault are acts of complicity.” It is essential to move beyond the dangerous notion that there is an exculpatory difference between tolerance of racism and racism itself.

Flavio Rizzo has a Ph.D in Comparative Literature from the City University of New York and an Italian Laurea in Cinema Studies from Roma Tre University. He taught Comparative Literature and Film Studies at the City University of New York. He is also a filmmaker. Among other works, he has a documentary on filmmaker Pier Paolo Pasolini (recognized with the Cinema Avvenire Award at the Venice Film Festival) and one on the Coca Wars in Bolivia. He can be reached at flavio.rizzo@gmail.com or twitter @flavio_rizzo

Conversations by Caterina Bonora, Jakob Brossmann
Lampedusa in Winter: In Conversation with Jakob Brossmann
podcast by Jessica Rohan
Ghost Boat and refugees in the media
podcast by Preethi Nallu
Italy's Foundering Left: Preethi Nallu speaks to Amalia Zepou
Reportage by Preethi Nallu
Italy’s Foundering Left
videos by Mario Badagliacca
Letters from the Identification and Expulsion Centers in Italy
Reviews by Tim LaRocco
Reflections on Life in the Italian Left
Art by Mario Badagliacca
The Gate of Shadows
Opinion by Flore Murard-Yovanovitch
A Small Mosaic of the Inhuman
Reviews by Flavio Rizzo
The Story of Wikileaks?
retrospectives by Clara Sereni
Keeping House
Like any of the articles? Support our work.
Donate Now