Beginning in the late nineteenth century and stretching deep into the middle of the twentieth, exhibitions of “native” people were held across Europe, North America and Japan; millions of spectators thronged to theatres, parks and zoos to watch unfamiliar ethnic groups perform a simulacrum of their everyday lives and compete in Olympic-type games and beauty contests. The route that Cherokees, Zulus, Singhalese, Inuits and many others took to these distant shows, often in caravans including all their worldly possessions, down to their pets and cutlery, is obscure and varied but in Spectacle: The Astonishing Life of Ota Benga, Pamela Newkirk has followed the tragic journey of one man, Ota Benga.

Ota Benga, also known as Mbye Otabenga, Bengal, Autobank, and Otto Bingo, is both well known and unknown, his place in posterity fixed by the month he spent in the monkey house of Bronx Zoo and the ugly headlines and public chatter this excited. His age can only be approximated, his ethnic group guessed at and the series of events that led to him being exhibited in the United States not once but twice, at the St. Louis Fair in 1904 and then two years later in New York, divined through the various fantasies created by his exploiter, Samuel Philips Verner.

It is Verner who comes across most clearly in Pamela Newkirk’s Spectacle, the scion of a wealthy Southern family; Verner was an unstable youth of overweening ambition. Heading to the Congo Free State as a missionary, he soon threw off the limits of the church and tried desperately to make his fortune in the rubber boom. Surrounded by the enslavement, rape, mutilation and murder of the African population by the Force Publique he seems unaffected, when a local leader, Ndombe, sends a message to President McKinley and King Leopold through Verner pleading for peace, he apparently misappropriates the gifts intended for McKinley and sells them to the Smithsonian.

Ota Benga received fifteen cents for appearing at the St. Louis Fair and returned to Congo to work at the mission; with the danger and instability surrounding him, it is easy to see the sense of staying close to white missionaries who could offer a modicum of protection against the state. Whether he needed any inducements to return to America or was eager for escape and adventure, it is impossible to know, but he finds himself aboard a steamer bound for Europe and then New York. Ota Benga is the only one of the St. Louis group to return and is perhaps still only a minor, in his mid-teens, under the precarious care of Verner, who slips into some kind of mania on the ship. 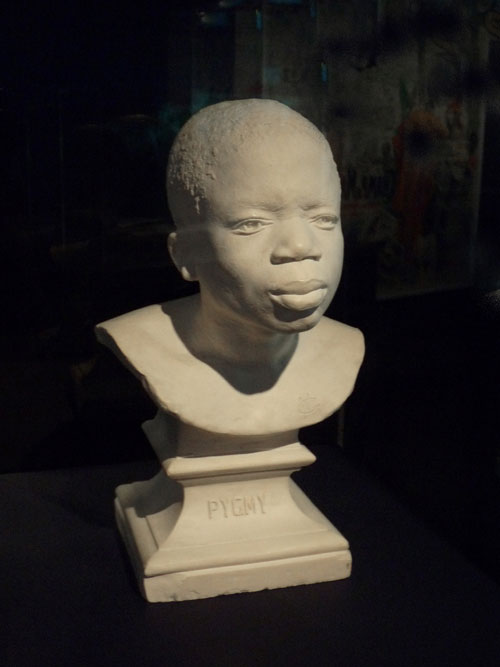 Newkirk brings a formidable depth of research to Spectacle and it is to her credit that the only unknowns in this book are those that are impossible for anyone to uncover. Newkirk brings to life the time that Benga spends bouncing around New York as Verner tries frantically to avoid an arrest warrant; his confusing and upsetting incarceration in the monkey house; the elite and incestuous world of academics and philanthropists that saw in him “raw material”; and the upright and indefatigable group of African-American clergy who finally rescued an increasingly belligerent and unhappy man.

“Me no like America” are Ota Benga’s first recorded words and the strongest part of this monograph is the way it traces the journey he made in America as an autonomous man. In touching detail, we see Ota Benga find a home and respect in a Brooklyn orphanage, work on a frigid farm in Long Island and then fall into melancholy and loneliness in Lynchburg, Virginia. When he finally puts a pistol to his heart and pulls the trigger, you feel the devastation wrought on him and on his people, and the plaintiveness of the song the local children heard him sing “I believe I’ll go home, Lordy, won’t you help me.”

Spectacle is a wonderful book that sketches in the shadowy figure behind the headlines without claiming to speak for him. It illuminates not just the worlds that Ota Benga knew but also our own cultural, scientific and socio-political inheritance.

Somali-born Nadifa Mohamed is the author of Black Mamba Boy, which was shortlisted for the Guardian First Book award and won the 2010 Betty Trask prize from the Society of Authors. Her novel, The Orchard of Lost Souls, recently won the Somerset Maugham prize and has been longlisted for the Dylan Thomas prize. Twitter @thesailorgirl

column by Esther A. Armah
How To Do Better As A White Man: An Emotional Reckoning
column by Esther A. Armah
An Open Letter to Ice Cube and All the Brothers Supporting Him
blog by Warscapes
Questioning Racism in the Indian Diaspora: Cultural Perspectives
Opinion by Andrew Ryder
Two Decades of Struggle Against Racist Police Violence
column by Esther A. Armah
How To Talk About Racism in Britain
Reportage by Priyamvada Gopal
Insurgent Empire: Anticolonial Resistance and British Dissent
blog by Ismail Einashe
Morocco celebrates migrants through arts and culture
Reviews by Anna Ziering
like i got a right to say: Aja Monet's My Mother Was a Freedom Fighter
Opinion by Léopold Lambert
The Testimony of an Object: Le Pen and the French History of Violence
Reviews by Michael Paye
The Siege of Jadotville and Imperialist Aesthetics
Like any of the articles? Support our work.
Donate Now