A critic recently suggested to Hollie Davis that if she continues to just make art “about black people,” she will “end up in the February slot like Kara Walker.” Whether it’s the February or the March slot that threatens to confine her, Davis acknowledges—and embraces—the reality facing women of color in the art world. She notes that while there are more women than men in art school, men earn about seventy percent more than women do in creative professions. But while achievement as a visual artist is a battleground in itself, she also sees art as a means of personal, professional, and communal advancement.

Since her childhood, drawing has always gone hand-in-hand with political education and community organizing. Her current research explores the way that arts engagement can help make urban teens more competitive candidates for college. She also argues that art programming is related to voting and political consciousness, and can contribute to economic revitalization for communities. But she is acutely aware of a tendency to take advantage of the creative class, pointing out that without an active push to provide more people, especially marginalized youth, with the avenues to pursue the arts professionally, the homogeneity of the fine art world will persist.

Disparities based on race, gender, and class are not unique to the art world—obviously—so Davis engages with it as just one site of struggle. Noticing that her roommates face similar disadvantages in their scientific fields, she draws connections between the experiences of women in the sciences and in the arts. In a presentation she planned and delivered for middle school students, she noted that women are not being outperformed in school or in entry-level positions in these fields, but are largely excluded from prestigious positions, grants, solo exhibitions, and tenure. Success in a man’s world, she imparts, requires extra initiative and entrepreneurial prowess of women, as they continue to break down patriarchic barriers.

While she fights politically for equality, through voter registration drives and organizing an Equal Pay Day rally, her artwork testifies for itself. She addresses the representational gap in visual media, focusing on marginalized narratives and nontraditional perspectives, and situating herself within a historical arc of women in the arts—from Kara Walker to Judy Chicago to Faith Ringgold. She intends to shift the center of our attention. “When I paint about beauty,” she explains, “I paint about someone who is not of a traditional kind of beauty standard.”

But whether or not she overtly makes work “about black people” or about femininity—and she intends not to be so didactic—it always appears so, politically, against a backdrop of whitewashed artistic and historical narratives. Davis mentions a Guerilla Girls poster that lists the “advantages” of being a woman artist, including “being reassured that whatever kind of art you make it will be labeled feminine.”

So be it, and she quotes Toni Morrison, “if there’s a book you want to read, but it hasn't been written yet, then you must write it.” 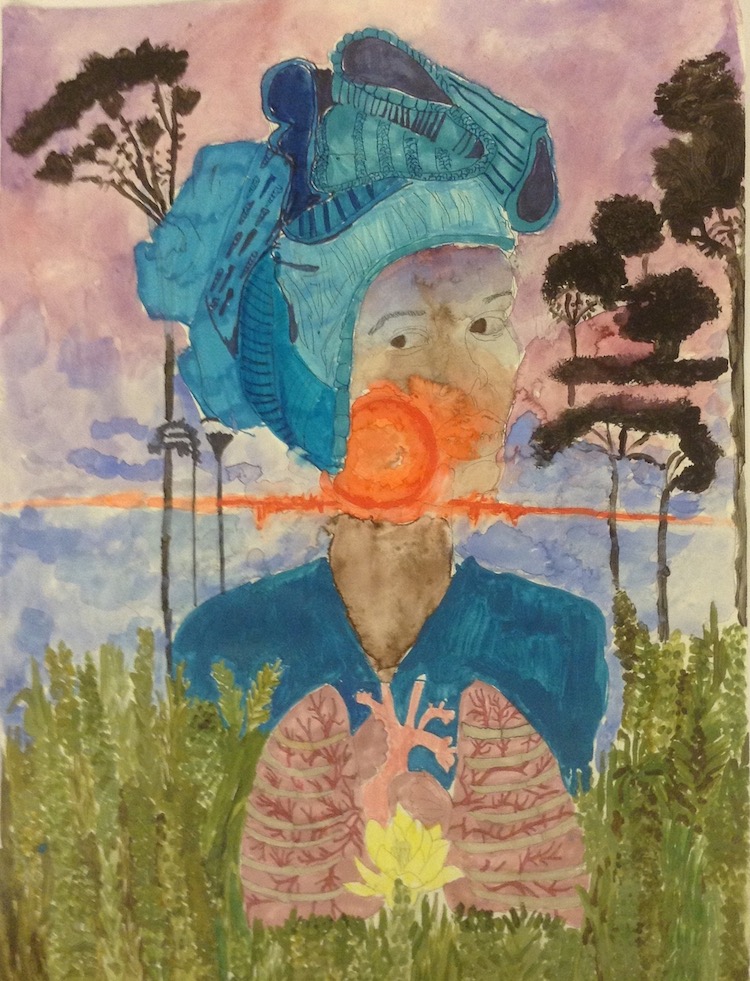 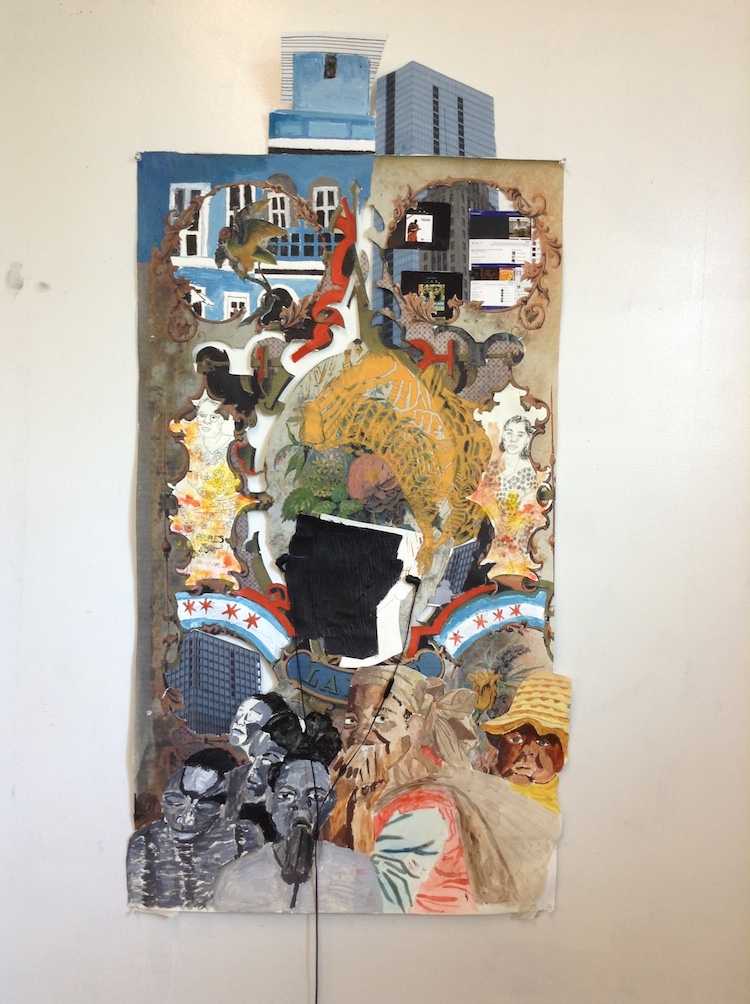 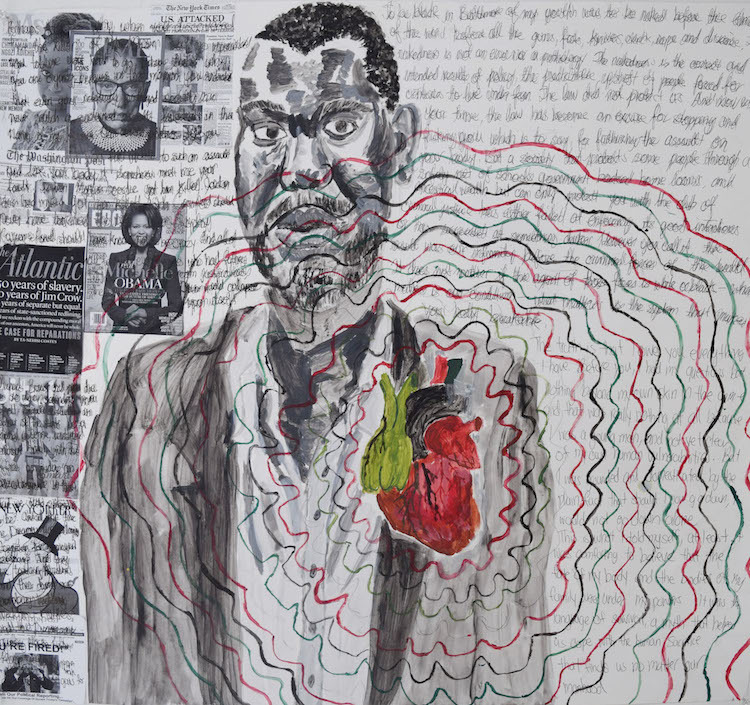 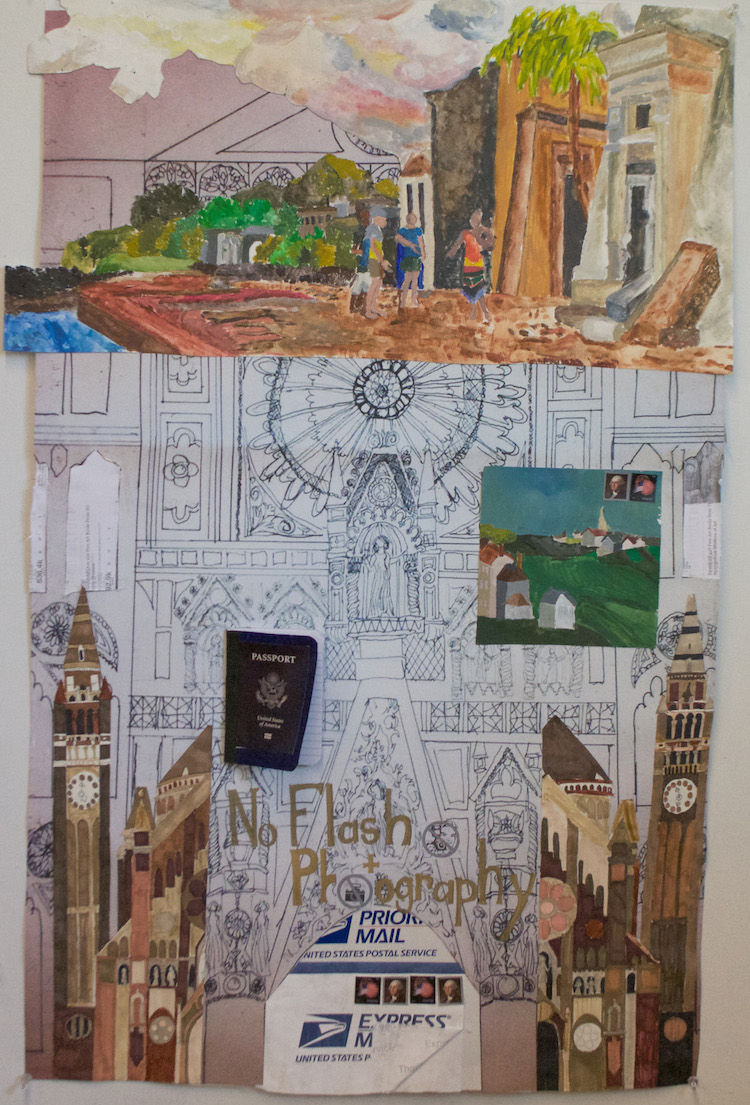 Feature image: from Not much has changed, 36x39, acrylic. All images courtesy of the artist.

Hollie Davis is a senior at Denison University who works in various mediums, including ceramics, photography, drawing, and printmaking. She recently delivered a talk on art and activism at the National Young Feminist Conference in Washington D.C., and has been active as a community organizer in her hometown of Chicago and in central Ohio. She is deeply indebted to her family for making it this far professionally, mentally, and artistically. Her father works on labor policy in Chicago, her mother was recently elected to a local school council, her brother studies at Purdue and her sister is in fourth grade.

column by Esther A. Armah
BEWARE! Statementism and Tweak-o-nomics
Conversations by Nathan Suhr-Sytsma
What binds us, in this boat: Poet ‘Gbenga Adeoba on migration
blog by Warscapes
Open Call: The Corona Notebooks
Poetry by Susan Nalugwa Kiguli
To War Mongers Everywhere
Reportage by Preethi Nallu
Empower a woman, empower an eco-system
Reviews by Nirupa Umapathy
The War on Terror Goes on Trial
Opinion by Jama Musse Jama
Ethiopian women are the new face of African leadership
videos by The Polis Project
Zillah Eisenstein on Liberal and Neoliberal Feminism
blog by Inshah Malik
Dispatch from Tehran
Art by Melissa Rodriguez
Art becomes therapeutic for refugees
Like any of the articles? Support our work.
Donate Now