Into the late afternoon hours, the blistering light gave way to soft, horizontal rays that crisscrossed over Lebanon’s Beqaa valley. The rays played with the children, casting long silhouettes of their forms, while they chased each other. As the temperature subsided, the elders of the community descended to the lowest level of the mosque-turned-refugee shelter.

Amid the cacophony, Abu Hassan paced back and forth along the dried-up marble fountain, the centre-piece of the makeshift living room, eventually settling at its edge. With a watchful eye on his four grandchildren, his chin resting on his staff, he gently scolded them as their cackles grew boisterous.

“You see that horizon, there?’ he pointed. ‘That is Qusayr [in Syria], which we fled.”

But it was not the first instance of his displacement and Qusayr was not his home.

A herder originally from the north of Syria, Abu Hassan grew up in the bucolic calm of a Bedouin community that subsisted on the kinship and patronage of its tribe, largely cut off from state support. That was, until a drought, dubbed one of the most prolonged of these disasters, devastated the fertile Levantine crescent that cradled the world’s earliest agricultural civilisations. Sixty percent of Syria’s cultivated land was impacted. Herders in Northeast Syria alone lost around 85% of their livestock. A vast majority moved from their villages to urban centres.

For the first time in their familial histories, Abu Hassan’s clan abandoned their ancestral occupation, with most able-bodied men moving to Syrian cities in search of work. With his sons in Homs, the retired father moved with the women and children to the close-by city of Qusayr. Even before he crossed the border to Lebanon in 2013 at the onset of the ‘Battle of Qusayr,’ Abu Hassan had lost his home. And this is precisely the type of chronic internal displacement across the global south that has been overlooked by humanitarian actors and ignored by the state apparatus.

Internal displacement
Most people moving due to climate impact are displaced within borders. Upon exhausting all options of restarting within their own countries, they cross over. According to World Bank estimates, as many as 143 million people in South Asia, Latin America and Sub-Saharan Africa will likely relocate within their countries by 2050, due to a combination of climate shocks and increasing violence.

To cite climate change as the driving cause of Syria’s 8-year-long conflict would be a gross over-generalisation, given decades-long political repression and the failure of government policies. In other than a handful of cases, such as the Asia-Pacific Islands that are rapidly sinking amid rising sea levels, most cases of displacement form a complex matrix of intertwined reasons. They do not appear as linear cause and effect relationships, but as cyclical patterns that overlap at points and deviate at others.

However, more sophisticated models for gauging the unique impact of climate change are emerging. For example, a recent study collated the weather histories of 103 countries with asylum claims to the EU, and found that the number will triple every year, based purely on climate, and independent of political and economic turmoil in these source countries. The data takes the form of a U-shaped relationship between the weather patterns in a source country and asylum applications. So, the more drastic changes in temperatures, the higher the rates of migration. Such studies also point to particularly high vulnerability among female migrants.

Women and girls
Women and girls are at the forefront of the battle against climate change, as migrants and refugees most severely affected by its impact, but also as caretakers of their communities and innovators, who can abate its reach. 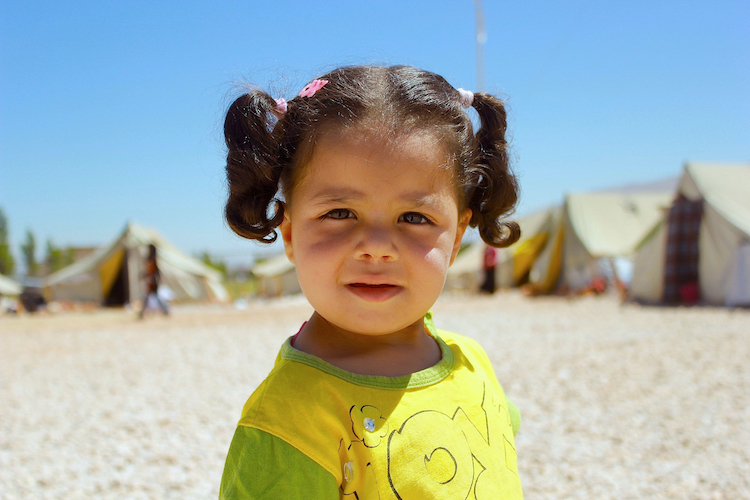 This Syrian girl was born in a refugee camp in the Bekaa Valley of Lebanon and is among the tens of thousands of "stateless" refugees, as she is not formally registered in Syria or Lebanon. Yet, this is the only home she knows. ©Preethi Nallu

With Abu Hassan counting his last days and his two oldest sons dying in the conflict, his daughters-in-law are poised to be the default heads of their households. Following five years of limbo and regressing Lebanese policies, they were planning their return to Syria by 2019. The grandfather worried about their survival, given that the women did not formally inherit the ancestral property. The family was going back home, reduced in size, diminished in spirit, but also resource poor. This is increasingly the case in displaced communities, where women become the default decision-makers, but often with little control over their economic futures, or influence over their immediate environments.

In other parts of the world, such as the agrarian communities of East, West and Sub-Saharan Africa, women have been the traditional food providers and gatherers of water and fuel. They are intimately versed in the stakes of climate change, yet they have significantly less access to land ownership and financial support, compared to men. Given this rampant inequity, empowering women – economically, socially and politically – will help them to become more climate resilient, and able to initiate proactive solutions. This is especially important for displaced communities where gender related hierarchies undergo drastic changes. The upheavals trigger new social conflicts, further unraveling of communities and consequently reduced environmental protection.

Exemplary female leadership
The sentiment behind the age-old proverb, “educate a man, and you educate an individual, educate a woman, you educate a generation” resonates powerfully with climate change initiatives. It appears that when you empower a woman as a decision-maker, you empower an entire community’s eco-system. Homegrown female-led groups that are leading on renewable energy sources, are a case in point.

From the women “green entrepreneurs” of Rajasthani tribal communities, to the “solar sisters” that provide clean energy in African villages, female leaders are creating palpable impact on their local and regional eco-systems. In fact, the industrialized countries and UN level mechanisms that often called for "mitigation" and "adaptation" measures can learn from these bottom-up, home grown, civilian-led initiatives. Women in these communities are organically mitigating the impact of human consumption on their environments, while also training future generations in adapting to the changing terrain of their eco-systems.

Such efforts when scaled to size and consistently supported over decades have proven to reverse the human ecological footprint. For instance, greening and re-forestation initiatives in India, China and other parts of the so-called global south, where women are often the primary food providers and protectors of the environment, show significant increases in global green leaf areas, over the past two decades.

Such efforts need to be empowered at all levels of climate justice, including international climate policies and financing. If women receive their fair share, simply in terms of access to the formal labour market, they could bridge the current gaps in financing sustainable development.

Abu Hassan would have found solace in his waning years, if he knew that the women of his family had the support to rebuild their lives in today’s war-torn Syria.

This story was originally published at openDemocracy.

Top feature image: A Syrian mother and daughter stand outside their makeshift refugee settlement in Tripoli, Lebanon. While humanitarian agencies deem women and girls the most "vulnerable" among displaced populations, female refugees have also proven to be extremely resilient in the face of hardship. Many have started small businesses and head entire households in the absence of the male members of the family. Some of the men stayed in Syria and others were killed in the conflict. ©Preethi Nallu

Opinion by Laura Kasinof
Yemen's Change Square, Ten Years On
blog by Warscapes
Ethiopia: Urgent Call and Appeal for Peace
Reviews by Sneha Khaund
The Personal is Political in Assam's Insurgency
blog by Warscapes
Open Call: The Corona Notebooks
Poetry by Susan Nalugwa Kiguli
To War Mongers Everywhere
Opinion by Jehan Bseiso
Skyping with Medics in Syria
blog by William D. Hartung
Merger Mania: The Military-Industrial Complex on Steroids
Opinion by Jama Musse Jama
Ethiopian women are the new face of African leadership
videos by The Polis Project
Zillah Eisenstein on Liberal and Neoliberal Feminism
Poetry by Louis Girón
From Bác Sĩ Poems
Like any of the articles? Support our work.
Donate Now