At a gallery in Philadelphia, artists assemble for a performance that interrogates the ideology of counterinsurgency that was developed during the U.S. invasion, occupation, and  continued interventions of Iraq.

“Today we put on trial the dehumanizing rhetoric that has fueled the lasting trauma of the U.S. War in Iraq,” Nataša Prljević proclaims. She’s standing before an audience of about thirty people at Twelve Gates Arts in downtown Philadelphia. It is a fine fall evening outside, yet the walls within the gallery seem just a bit too white for comfort, the air a bit too tight. The room hangs in silence. So begins “A People’s Tribunal: 28 Exhibits.”

“A People’s Tribunal: 28 Exhibits” is an extension of the exhibition, “Clear-Hold-Build,” curated by Shimrit Lee, Nataša Prljević, and Joshua Nierodzinski of HEKLER, a collaborative platform and collective that focuses on the critical examination of hospitality and conflict. The exhibition surveys the impact of counterinsurgency over seven decades across Algeria, Iraq, Palestine, Pakistan, Vietnam, Syria, and the Former Yugoslavia. “28 Exhibits” is organized in collaboration with exhibiting artists, Dena Al-Adeeb and Farideh Sakhaeifar. The idea of a performative tribunal emerged from Al-Adeeb’s long-standing research on how decolonial methodologies and experimental archives can be used towards restitution and reparations in Iraq.

The tribunal derives its name from “Twenty-Eight Articles,” the 2006 paper written by David Kilcullen that has served as an operating manual for U.S.-led counterinsurgencies. In “28 Exhibits,” that text the becomes the “prop,” a window through which artists lead a broader investigation of the superstructure of counterinsurgency — the confluence of ideology, operating principles, military tactics and rhetoric that created the basis for lasting trauma from the Iraq war.  Central to Kilcullen’s guide is the concept of “clear-hold-build,” a modern name for a longstanding military strategy that—as wall text in Twelve Gates explains—calls for “removing insurgents from a space using lethal force, sustaining that expulsion by physical barriers, and then pacifying resistance by supporting economic development.”

Over the next two hours, that strategy is on trial. Lee, adopting a terseness that presages conviction and authority, serves as judge of the proceedings. Under her demanding watch, eight of the articles are read aloud, then interrogated.

"The past is in front of you. Witness it. Testify."
Featured Amina Ahmed, Dena Al-Adeeb, Maryam Jahanbin & Hussein Smko in concluding exhibit.
Photograph courtesy ©Sahar Irshad

People’s tribunals, courts of “law” adjudicated by private citizens or organizations, are intended to give voice and visibility to populations that seek justice but may be marginalized by international law. “A People’s Tribunal: 28 Exhibits” conjures other courts of law, including the Russell Tribunal on Vietnam (1966-67) and Latin America (1974-76), which sought to give voice to populations impacted by U.S. interventions. But “28 Exhibits” is no ordinary tribunal. It looks beyond legal frameworks and the language of human rights and focuses instead on embodied experience. It recognizes that memory is alive in the present, and that expressing it fully often requires unorthodox mediums, including sculpture, video, oral history, dance, and even stream of consciousness.

Rather than calling witnesses and legal testimonies, therefore, the organizers of “28 Exhibits” calls on cultural workers from the Iraqi, Iranian, Kurdistan and the East African diaspora who have experienced the violence and tragedy of counterinsurgency first-hand. In the process, they expand the possibilities of a traditional white box gallery, transforming it into a space of healing, restitution, and resistance.

Lee begins the proceedings with a reading from the introduction to the Articles. It describes counterinsurgency “in a nutshell,” as “a competition with the insurgent for the right and the ability to win the hearts, minds and acquiescence of the population.” For the response, Hussein Smko, a self-taught dancer and choreographer with Arab-Kurdish roots, takes the stage. Clad in all-black, he sings “Mawṭinī,” the Iraqi national anthem, as he dances. For Smko, this performance is an “anthem for the Arab Nation”— a reminder to people like Kilcullen that his people cannot be won.

It’s an auspicious opening for an evening of searing honesty and unfiltered emotion. In performance after performance, Kilcullen’s articles crumble under the weight of truth.

Take Article 11, which advises readers to “avoid knee jerk responses to first impressions.” Violence, the article states, “may be part of the insurgent strategy, it may be various interest groups fighting it out, or it may be people settling personal vendettas.” Or, “it may just be daily life.” A response from the Iraqi-born artist Luma Jasim turns that concept on its head. In a re-enactment of the night in 2007 when her cousin was shot, violence is anything but normal. When it ends, Jasim’s eyes are glistening with tears. 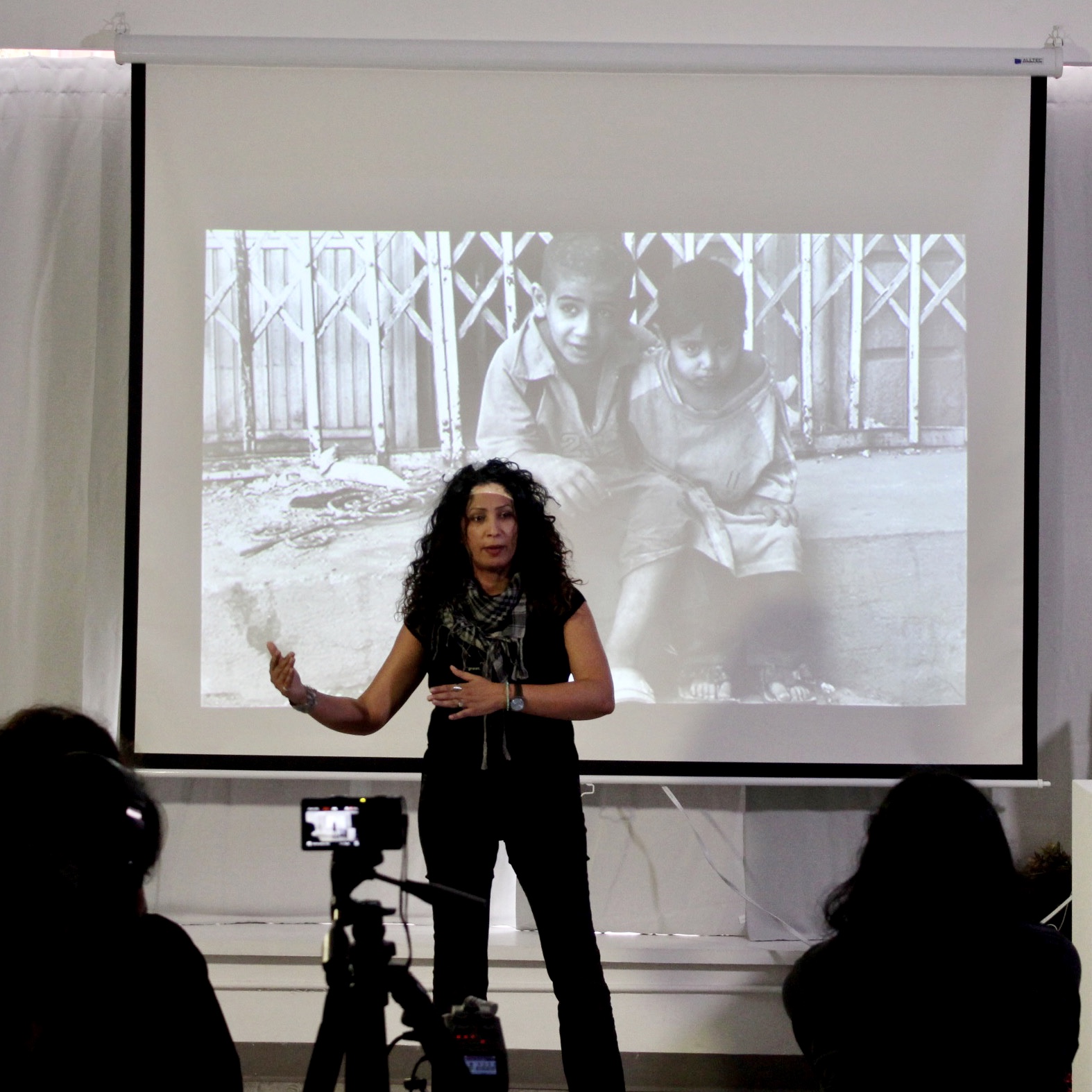 "We ourselves got punished." Testimony by Luma Jasim with backdrop photographs by Hatif Farhan.
Photo courtesy ©Sahar Irshad

Or take Article 19: “Engage the women, beware the children.” Fadaa Ali, an Iraqi refugee who resettled in Philadelphia, proves the devastating truth that, on the contrary, it is children and women who must beware the counterinsurgent. A short video documents the night an American missile hit her house during the first Gulf War. She protected her son with her body, and managed to escape as the windows broke and the house began to collapse.

At times, there’s as much irony to be found in these performances as agony. Article 6, for instance, recommends that the counterinsurgent find “a political/cultural advisor“ who is “able to speak the language and navigate the intricacies of local politics.” In response, Kazem Ghouchani presents a video of an interview with his mother about the family’s forced departure from Iraq in 1980. That juxtaposition—between a refugee’s lament and an invader’s quest for local knowledge—is just one of many throughout the night. Here’s Article 1: “Know the people, the topography, economy, history, religion and culture.” At this point, we’re introduced to Mohamed Okab’s painting of the National Museum of Iraq, which features a gaping hole above the arch of the main gate—the collateral damage from a rocket. Then we meet Yaroub Al Obaidi, who shows us his sculpture of Queen Puabi, a queen of ancient Mesopotamia who represents the city of Baghdad—surrounded with barbed wire and bullet casings. How can an insurgent know the culture, these pieces seem to ask, if one is actively destroying it?

While many of the artists in the performance were first-hand victims of the U.S. counterinsurgency in Iraq, some experienced it from afar. Their testimony is no less compelling. Nada El-Kouny, for instance, shares her scattered memories of watching the Twin Towers fall as a 12-year-old in Nairobi. As she speaks, CNN and FOX from the early days of the War on Terror flash on a screen behind her. “How will I go to school tomorrow? What will I tell them?” she recalls asking her father.

The final performance in the tribunal is also its most collaborative. It’s fitting as a response to the conclusion of Kilcullen’s Articles, which describes his document as a representation of “tribal wisdom, the folklore which those who went before you have learned.” Amina Ahmed, Dena Al-Adeeb, and Maryam Jahanbin, clad in black, whisper in Arabic, Farsi, English, and Kurdish: “The past is in front of you, you can see it, witness it, testify” while Smko dances around them. The phrase is inspired from a South American indigenous aphorism, referencing the signified ways we see, witness, and testify.

Violence, we learn, is also ever-present, as Lee quotes the Articles a final time: “If you remember nothing else, remember this: Whatever else you do, keep the initiative.” By this, Kilcullen means that the counterinsurgent should be proactive, not reactive, always striving toward its objective. For those who know that counterinsurgency is inherently proactive—horrifyingly so—the advice sounds absurd. But for the performers and attendees at this tribunal, it is also, in a way, instructive. As counterinsurgency continues to wreak havoc around the world, it is incumbent on artists to keep their own initiative, to keep their sights set on resistance. The stakes, as we have learned tonight, could not be higher.

Nirupa Umapathy is an independent writer, researcher and social entrepreneur, writing across a variety of media including fiction, non-fiction and essays to investigate the role of the individual as a maker of change and culture. After 14 well-spent years in financial services, Nirupa founded a creative thinking and learning community called Salons for Life for individuals to intentionally gather and co-create roadmaps for ideation and action for personal and social change.