The opening shots of Christine Cynn’s Shooting Ourselves encapsulates the jarring visual world of the arms industry. The film begins in a conference room: an empty, quiet space with greying carpet, a map of the world, and unopened water bottles on a wide table. The camera then cuts to Aleppo, the archetype of a city in ruins. Cynn brings us back to the safety of that mysterious sterile world for a few moments before plunging us back into the interior of a war zone—a living room splattered with bullet holes, a sagging couch floating in the dust of the aftermath of an aerial strike. In this cinematic vision, war encompasses both quotidian business deals and the mourning of innocents, technological innovations and the destruction of entire cities, the ever-elusive concept of “national security” coupled with the equally slippery notion of “peace.”

Over the next hour and a half, Cynn, who previously co-directed The Act of Killing, continues her exploration of violence through performance, re-enactment, and inconceivable dialogues between perpetrators and victims. In Shooting Ourselves, she films 13 strangers from around the world: A defense manufacturer, a lawyer representing victims of American drone attacks, a press photographer in Afghanistan, a computer hacker, a peace activist, an MSF surgeon, a refugee, a child soldier, a helicopter pilot, and an armament factory worker, among others. Separated by nationality and, often, language, they find a strange sort of unity in their connections, however varied, to the arms industry.

“Imagine a strange place, with many rooms,” Cynn requests in a voiceover. “Inside each room stands a stranger. Each stranger has a story. Each story has a conflict. Between all these conflicts, what new stories might grow?”

The setting, in the film, for this so-called “strange place” is a warehouse in Berlin, where these individuals have come together to dramatize and record their personal stories for “Situation Rooms,” a multi-player video piece originally conceived by German theater group Rimini Protokoll. The title of the piece summons Pete Souza’s iconic 2011 photograph ‘Situation Room’ that depicts President Barak Obama and his national security team monitoring the manhunt for Osama Bin Laden in a mix of exhaustion, anxiety, horror and concentration. It also invokes the sealed and secretive spaces where state violence is conceived, deployed, and legitimized.

For visitors to “Situation Rooms,” the warehouse is surreal. They are provided handheld devices, which play short films that guide them through the space, simulating real places and situations along the way. In her press notes, Cynn writes, “Step through one door and you’re in a street demonstration in Homs, Syria. The next door leads you to a cubicle in San Diego where a drone operator drops bombs on villagers in Waziristan, Pakistan. Go past the Russian engineer in the Iranian nuclear lab and turn left to witness a nine-year old boy in a classroom in Democratic Republic of Congo, being kidnapped to train as a child soldier.”

Each room contains details strategically employed to help the protagonists convey their stories, whether it’s an aerial map slipped behind a picture frame, a small-scale model of a weapons factory, or a miniature tank in a display case. Spectators gradually become entangled in the set’s spatial and material labyrinth, inhabiting the multiple perspectives of the protagonist “first-person shooters” (of cameras, and sometimes of guns). Cynn’s Shooting Ourselves was shot behind the scenes during Rimini Protokoll’s production, allowing each protagonist to shoot their own stories on set, and in the process, become acquainted with one another. 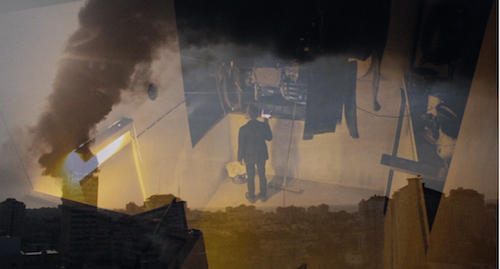 A scene from the set of ‘Situation Rooms’ is overlaid on a burning cityscape.

At the U.S. premier screening during this year’s Margaret Mead Film Festival, Cynn spoke to the audience about her motivation to bring together total strangers from across the globe and the political spectrum to submit themselves to a theatrical world order where “all perspectives are equal.” She spoke of an oddly warm “dysfunctional family” bound by weapons and warfare. Though seemingly disjointed at times, a narrative of the industry of war connects each character’s life to the others, whether they benefit or suffer from it, directly or indirectly.

While Cynn describes the film as a “potential for hope in our fragility and curiosity,” many of the protagonists offer a different story, one in which war is by definition open-ended, totalized, and perpetual. For example, German war photographer Maurizio Gambarini presents the audience with an image of a hospital ward in the Congo. “On this table a baby is dying,” he explains, his voice trembling with emotion, “it’s always the civilians who suffer.” There will always be enough work for him, he admits, because there’s always a war somewhere. The sustainable nature of war as a profitable industry is again reflected in a conversation between peace activist Ulrich Pfaff and weapons manufacturer Marcel Gloor. The realization of Gloor’s desire for future peace, Pfaff points out, would spell his own unemployment.

The military-industrial complex continues to boom, even in the absence of an official declaration of war. This is true as well for workers employed in industries that blur the line between military and civilian technologies. Gloor describes how his company went from producing parts for washing machines to parts for high-tech weaponry, yet “the work is always the same: finishing, cleaning, metalwork, and of course measuring.” He claims that he has no idea for whom they are producing since the company uses code names for their clients. Yet later in the film, he says that he could identify his products in the news during the Iran-Iraq War in the 1980s: “We saw the guns we delivered to the Shah, including our anti-aircraft gun.”

Similarly, Irina Panibratowa worked from 1981-92 in a number of underground cafeterias, some of which produced laundry detergent, and others that made explosives and Katyuscha missiles. Her job was, nonetheless, always the same. At the beginning of the film, we meet in her small kitchen, where she stirs borscht while explaining how her husband worked as an engineer at the missile factory, but would never tell her what exactly he did there. Panibratowa is the only woman featured in the film, a result Cynn explains as a natural reflection of men’s domination of the world of weaponry. Two potential female protagonists, women from South Sudan and Germany, declined to take part in the project due to concerns about a pending asylum case and child care obligations, respectively. This context is telling, yet the film neglects to explicitly breach the gendered aspects of war, despite the fact that women disproportionately bear the brunt of violence during and after armed conflict.

Panibratowa and her peers in the film frequently frame their own attachments to war in similar terms— as shifting, unpredictable, and detached from any personal agency.  Nathan Fein, an American computer hacker working in Israel, describes how a simple, harmless tool can be easily transformed into a weapon by someone else. For example, his friend designed a software tool for bank security that was later used to attack an Iranian enrichment facility. “[We] have no say over where it gets used or against whom,” he laments.

Fein defines hacking as “observing systems, figuring out their structure and using them for alternative purposes.” In many ways, Cynn is attempting to do just that - hack into the industry of war, expose its structure through an exploration of its individual parts, and thus begin to imagine its undoing. Yet this exploration begins to feel shallow and unattainable as each protagonist dissociates him or herself from any responsibility. The film plays like a collective Eichmann trial, in which each character explains violent outcomes by pointing to forces outside of their control. In a way, this collage of diffused responsibility is apt, considering that the defense industry is not the work of a single individual and cannot be dismantled as such. On the other hand, by focusing on the “common humanity” of each protagonist, the film tells us very little about the larger historical, political and economic structures that sustains war as a possibility, even as an objective.

Cast and crew members wander the labyrinthine halls of the “theatre” during the production of ‘Situation Rooms.’

Much like she did in The Act of Killing, Cynn attempts to use the medium of filmmaking to generate dialogue that might not otherwise take place. Yet unlike her previous films, confrontations between the protagonists in Shooting Ourselves often feel hurried and forced. At one point, the Indian Army Gunship Pilot Narendra Divekar argues with lawyer Shahzad Akbar about the ethics of drone warfare. It’s a short and clumsy exchange, and it ends with both men sticking firmly to their positions then fumbling with their iPads before exiting the scene in silence.

Such attempts at dialogue fall flat throughout the film. The most telling encounters, meanwhile, are often those that remain decisively one-sided. When, for instance, we meet Amir Yagel, a former Israeli sniper who served in the Gaza Strip, Hebron and the northern border of Israel, we are confronted with the impossibility of hearing from his victims, those who have found themselves in the crosshairs of his gun. Instead, he whispers to us, his camera, “Come with me to the sand and I’ll show you how to lay down in an ambush.” He lies down in the dark corridor, his legs spread-eagled, and describes how he often had to stay in this position for up to 48 hours, surrounded by flies and the sound of drones. In moments like these, the film takes on an element of what Roger Stahl calls “militainment,” in which state violence is translated into an object of pleasurable consumption for the general public. The audience is invited to try on soldier identities with little regard to those on the other side of the gun. By using simulation to narrate violence, the film often mirrors drone warfare, eliminating certain bodies from both sight and language.

Who is included in the “dysfunctional family” of the film, and whose voices remain out of reach? Is finding a “common humanity” a useful framework for an analysis of the war industry? As the protagonists converge in the conference room at the end of the film, defense manufacturer Emmanuel Thaunay explains, “Each [individual] has their own problems in their own lives, but there’s a moment when we come back together because we all share a common connection to weapons, violence or war.” Yet in the context of war, not everyone returns, and a glaring border persists between the world of the sniper and his target, the drone operator and those seeking justice, the pristine conference room and the streets of Aleppo in ruins. In these spaces, there is no dialogue, only violence.

Shimrit Lee is a PhD candidate in Middle Eastern and Islamic Studies at New York University.