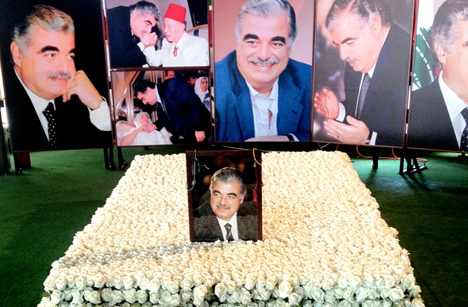 Nine years ago this past Friday, former Lebanese Prime Minister Rafik Hariri and twenty-two others were killed in a massive explosion on the Beirut corniche.

Despite Lebanon’s entrenched tradition of unsolved political assassinations—dating back to 1951 and continuing to the present day—this particular killing was deemed by the then-government of Fouad Siniora to merit an international tribunal in The Hague, established by the United Nations Security Council.

Following all manner of complications and delays, the Special Tribunal for Lebanon (STL) finally kicked off last month with the trial of four Hezbollah members. A fifth suspect was inserted into the lineup this week, necessitating further delays.

The court’s operation has been, to put it mildly, unique. For starters, as the Guardian points out, the defendants “are being tried in absentia--the first time this has happened at an international trial since the Nuremberg prosecutions."

Defense lawyer Yasser Hassan has drawn attention to other peculiarities, and is quoted in Al Akhbar English as objecting to the prosecution’s reference to the defendants as “Shia Muslims”: “Has there ever been any indictment in any tribunal [in the world] that mentions the suspect’s religion or confession? Do they say ‘this accused Catholic,' or ‘this accused Protestant, or Buddhist, or even atheist?’”

Most importantly, as Lebanese criminal justice expert Omar Nashabe discussed in a 2011 lecture at the London School of Economics, Israel has been conspicuously exempt from suspicion by the STL despite said nation’s acknowledged history of assassinations and other meddlesome behavior in Lebanon. Instead, it is Hezbollah that sits in the tribunal’s cross hairs.

A Transatlantic "Wall of Assumptions"

Conveniently, the STL is equipped with a capacity to single-handedly absolve itself of any accusations regarding its legitimacy. In July 2012, the Trial Chamber of the STL confirmed its own jurisdiction to conduct the Hariri assassination trial; the results of the auto-inquiry were explained in an official press release: “The Trial Chamber dismissed all the motions of the Defense Counsel, who argued that the Tribunal was set up illegally, violates Lebanese sovereignty, has selective jurisdiction and does not guarantee the accused a right to fair trial."

Days into the start of the trial last month, defense lawyer Antoine Korkmaz lambasted the prosecution for selecting two Argentine experts to confirm a desired conclusion: that the explosion that killed Hariri was the work of a suicide bomber with a Mitsubishi van and not, as the defense argues, the result of an underground bomb.

According to Korkmaz, the expertise of these two individuals had also been called upon in the aftermath of the 1994 bombing of the Argentine Israeli Mutual Association (AMIA) in Buenos Aires, which killed over eighty people.

Impromptu guilty verdicts issued at the time by the United States and Israel unsurprisingly pinned the blame for the AMIA bombing on Hezbollah and its Iranian benefactor. Award-winning historian and journalist Gareth Porter, who labored to separate fact from propaganda in a thorough investigation for The Nation in 2008, quotes the former chief of the political section at the US Embassy in Buenos Aires on the “wall of assumptions” under which the US was operating: “The primary assumptions, [he] said, were that the explosion was a suicide bombing and that use of a suicide bomb was prima facie evidence of involvement by Hezbollah and therefore Iran."

As Porter documents, the allegation that the bomb had exploded in front of the AMIA in a white Renault Trafic van found little substantiation in reality. For one thing, the US Bureau of Alcohol, Tobacco and Firearms produced an on-scene post-explosion report "suggesting that the blast came from inside rather than outside" the AMIA building.

For another, only one out of approximately two hundred eyewitnesses claimed to recall a white Renault Trafic.

In the case of the Hariri assassination, meanwhile, the prosecution’s narrative has presumably been aided by the nighttime removal from the crime scene of vehicular evidence, the revelation of which sparked accusations of tampering and concealment.

Just Not That Special

As the US- and Israeli-backed story goes, the AMIA plot was hatched by terrorists in the tri-border area between Argentina, Brazil, and Paraguay.

However, a superior officer in the Paraguayan Special Operations Group—a special forces unit created specifically to investigate such accusations—confirmed to me last year that no positive evidence whatsoever had yet turned up, despite charitable encouragement from visiting members of the CIA.

In both Buenos Aires and Beirut, mobile phone logs have been presented as alleged evidence of suspects’ guilt. In the latter case, this has been done with no regard for Israel’s manipulation of Lebanese cellular networks; in the former, even the previous head of the FBI’s Hezbollah office commented to Porter that "Using that analysis, you could link my telephone to bin Laden's.”

Of course, it’s not difficult to see who ultimately benefits from efforts to incriminate the anti-Israeli resistance in acts of domestic and international terrorism.

Meanwhile, the terroristic behavior regularly exhibited by Israel in Lebanon—sometimes with the help of rush shipments of weapons from the United States—has never been met with a “special tribunal.” Apparently, the slaughtering of civilians by certain parties simply isn't of special interest.

And then there is the cost. The BBC noted in January that “[t]he STL itself, leave aside the nearly four years of international investigation that preceded its establishment, has already cost around $325 million."

In an afflicted country in which much of the population subsists on twelve hours of electricity a day, more useful projects could no doubt be undertaken than an expensive and politically motivated judicial farce with a predetermined end.

Opinion by Jehan Bseiso
Skyping with Medics in Syria
Reportage by Preethi Nallu
Empower a woman, empower an eco-system
Reportage by Anna Reumert
Dead Memory? (Post)Colonial Duress at the French Military Cemetery in Beirut
Art by Melissa Rodriguez
Art becomes therapeutic for refugees
Reportage by Betsy Joles
City Beyond Refuge: Journeys Suspended in Istanbul
Poetry by Warscapes
A Poem for Aleppo
Reviews by Mary von Aue
Fight or Flight: Conference of the Birds and the Modern Relevance of Sufi Parable
Opinion by Preethi Nallu
Leaders’ Summit on Refugees: Can we avoid losing more generations?
Literature by Mohammed Kadalah
The Representation of the Syrian Revolution in Literature
videos by Warscapes
A Warscapes ebook on Lebanon
Like any of the articles? Support our work.
Donate Now