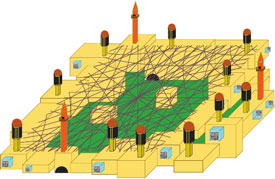 While security considerations have always been a part of the urban design process — and are arguably becoming more so — few modern cities have been planned from scratch with military motives at their core. When they have, their one-dimensionality has either prevented them from leaving the drawing board as anything more than a darkly utopian conceit or blighted their capacity to accommodate everyday life.

Renaissance engineers merged the concepts of “fortified city” and “ideal city,” tracing a common language of geometry and perspective – lines of sight could serve as lines of fire, a fixed shape as a defensible boundary. One of the few built examples is Palmanova, in northeast Italy. Edward Muir wrote that the elegant town “was supposed to be inhabited by self-sustaining merchants, craftsmen, and farmers.” But it soon became evident that, “no one chose to move there, and by 1622 Venice was forced to pardon criminals and offer them free building lots and materials if they would agree to settle the town.”*

Today, our cities are “fortified” in more subtle ways: a trajectory can be drawn from Hausmann’s troop-friendly Paris to the “optical urbanism” of Israeli hilltop settlements and the city of London’s ring of steel. The shift is towards a security that does not reveal the threats it secures against — security without (specific) cause for alarm — as these various measures innocuously achieve their objectives without drawing attention to themselves.

As these interventions become further embedded in the everyday urban fabric — for better or worse, through force or familiarity — the planned military city has returned as an ideal, this time driven not by the tenets of Renaissance humanism but by the changing conditions of warfare, namely the strategic challenges and opportunities of its increasingly urban setting. Shura City and Ertebat Shar are both urban environments that exist as responses to this reconfiguration, and each approaches it from opposite fronts of the “War on Terror.” Designed by Asher J. Kohn, Shura is subtitled “an architectural defence from drones,” and is an experiment with no proposed location (though its name and context allude to parts of the Middle East, South Asia and North Africa that are targeted by drones); the latter, in the Mojave Desert, California, is the current name for a theatre of war in which the US Army simulate urban conflict operations.

Like Palmanova, Shura is a contemporary fortress that poses as a city. Kohn outlines particular kinds of paint, glass, ventilation and roofing structures that comprise the city’s character, but which also obscure signs of life to prying external eyes, denying a drone operator the information he or she needs to conclusively identify a target. “Creating an empty data set turns the smart drones into dumbbombs, and there’s nothing a technologically superior force dislikes more than being brought down to their opponent’s level,” Kohn writes. His hope is to overcome the failure of defence, reclaiming space to empower the victims of asymmetrical warfare and thus redressing the imbalance of power that it enforces. If “[d]rone warfare proposes that every inch of land is (and all of its inhabitants are) part of the battle space,” his challenge is to forcibly secure a spatial exemption to that proposal.

Ertebat Shar, meanwhile, is willingly and incessantly subjected to—rather than shielded from—an ongoing battle. Roughly an hour away from Barstow, California, it is currently modelled on an Afghan village, and is only one of 15 artificial settlements at Fort Irwin, the US Army’s 1,000 square mile National Training Centre. In the course of a compulsory 21-day rotation, the base provides a playground for training programmes that teach troops how to clear and navigate urban structures without maps or clear communications. Bordered by featureless, undulating sand dunes which act as buffers, it is both a tabula rasa, capable of accommodating whatever urban threat one chooses to project onto it, and the only landmark for miles around. It is an exceptional space in the obscure inner reaches of the home front, a hostile enclosure on friendly territory.

The urban environments projected onto Ertebat Shar are heavily orientalised renderings of the real. While occasional “Middle East and North Africa Heritage” days would seem to emphasise efforts to understand and even (perhaps perversely) celebrate the culture of “the enemy,” the village is dotted with crudely oversized mosque facades and populated by an understaffed roster of Afghan civilian role players who are paid to emulate their own people as passive bystanders. Against this backdrop, troops held to “reduced grooming standards” get into costume to play insurgents. The setting of the ostensible simulation is reduced, cartoon-like, to a landscape whose key features are mosques, beards and automatic weapons. It’s hard to know whether these efforts to replicate a “typical” community are more or less humane than the calculated precision with which replica Japanese rice-paper houses were constructed in the Utah desert during World War II, their dimensions and building materials emulated to hone the destructive capacity of incendiary weapons that would later destroy them.

Added to this is a performative element, under which Ertebat Shar opens its doors as a tourist destination twice each month. The US force thus becomes a home team, with its own modest army of social media savvy supporters. Socked and sandalled visitors are shepherded round as though they’re at Universal Studios and given prime vantage points from which to see the spectacle of pyrotechnics and semi-choreographed clashes. The site’s managers encourage the mediation of the already performative scene, urging the guests to take photos and share them on social networks, where they can be appraised for their affinity to action films.

A group of writers from Venue joined one of the tours and described the scene after a fake bomb detonated. “In the subsequent chaos,” they wrote, “it was hard to tell who was doing what, and why: gun trucks began rolling down the streets, dodging a live goat and letting off round after round as insurgents fired RPGs (mounted on invisible fishing line that blended in with the electrical wires above our heads) from upstairs windows; blood-covered casualties were loaded into an ambulance while soldiers went door-to-door with their weapons drawn; and, in the episode's climax, a suicide bomber blew himself up directly beneath us, showering our tour group with ashes.”

Shura City, meanwhile, is “a closed circuit.” The window glass is chosen to obscure the skin colour of those inside; a playful transformation of a usually vulnerable, transparent surface into a tool for camouflage against a “smart” weapon. The city also has a roof that “provides year-round climate control, lighting, and shelter.” This also isolates it from the external world and encourages the orientalist perception of the city as one more “terrorist nest” supporting the “axis of evil.” In a sense, Kohn knowingly encourages this. “It is meant to be alien — but not hostile – from the outside while homey and familiar from the inside,” he writes. The risk is that in withdrawing so completely into the city, one sacrifices the power to influence the world around it, including the drawing of Kohn’s distinction between the “alien” and the “hostile.” The price of securing control over the space of exemption is the possibility to influence the normative space in which it is situated.

It is perhaps the totality of that control that sours Shura’s dream. People gladly take shelter, but don’t willingly adopt it as a lifestyle. Shura’s foundational assumption that “[l]ife has become a perpetual defence,” betrays the city’s failure to allow residents to live on their own terms. Life in Shura would always be preconditioned by the necessity to defend, and the means of that defence are somehow all the more disturbing for their exhaustive extent and apparent innocence. The reclamation of space thus stalls its own process — a short circuit in the closed circuit.

Shura and Ertebat Shar are both products of anxiety over shifting balances of power in conflict: the loss of power to defend one’s own space, and the desired capacity to overpower those in alien, urban spaces, where the combination of an enemy embedded in three dimensions, the likely presence of innocents, and the need for radically sharpened reaction times all blunt the US’s advantage of technological and ordnance supremacy. Though they seek to exploit the conditions of an urban environment from opposite ends of an asymmetrical conflict, the promise of security offered by each is a superficial one. The “successes” they might claim, in the normalization of a siege mentality and proficiency in the theatre of war, doom them to a common failure in their contrary founding aims.

*Edward Muir, The Culture Wars of the Late Renaissance: Skeptics, Libertines, and Opera

Patrick Sykes is a writer, editor and radio producer based in London. He sub-edits at The Times and has produced documentaries for Radio 4 and Resonance FM. His first chapbook of poems, Even in the Still, was published in 2012 by Wide Range. Follow him on Twitter: @patrick_sykes

The Culture Wars of the Late Renaissance: Skept...
Hardcover
$28.86
Buy from amazon.com

The Least of All Possible Evils: Humanitarian V...
Hardcover
$19.58
Buy from amazon.com

blog by Warscapes
Ethiopia: Urgent Call and Appeal for Peace
Reviews by Nirupa Umapathy
The War on Terror Goes on Trial
blog by William D. Hartung
Merger Mania: The Military-Industrial Complex on Steroids
Literature by Valérie Gruhn
Mosul Journal
Art by Melissa Rodriguez
Art becomes therapeutic for refugees
Conversations by Gabrielle Spear
Iraq 2103: Sci-fi Against Empire
Opinion by Michael Bronner
The Guantánamo Diarist is Cleared for Release!
videos by Warscapes
A Warscapes ebook on Lebanon
Opinion by Madiha Tahir
Drone Blowback is a Bad Argument. Here's Why
Opinion by Sabrina Toppa
Yemeni Drone Victims Still Waiting for Accountability
Like any of the articles? Support our work.
Donate Now