The first of its kind in modern Iraqi literature, Iraq + 100: Stories from a Century After the Invasion, compiles speculative fiction from ten Iraqi authors living in Iraq or the diaspora. The collection’s editor Hassan Blasim—the renowned author of The Iraqi Christ and The Madman of Freedom Square—writes in the collection’s foreword, “Our project tries to imagine the future for this country where writing, law, religion, art, and agriculture were born, a country that has also produced some of the greatest real-life tragedies in modern time.” Iraq + 100, a dark and witty mix of science fiction, allegory, and magical realism, comes forth from the notion that alien encounters and apocalyptic landscapes are not so far from Iraq’s current reality. And more importantly, given the freedom to imagine and the agency to write one’s own history, new worlds can be written into existence. In response to Trump’s executive order issued against Muslims and the refugee resettlement program, and in solidarity with its authors, Iraq +100’s publishing house, Comma Press, recently announced their plans to spend 2018 exclusively publishing work from the seven countries affected by the ban—Yemen, Syria, Iran, Iraq, Somalia, Sudan, and Libya.

I interviewed Ibrahim Al-Marashi, one of the contributing authors of Iraq + 100, about his short story “Najufa,” freedom of movement, his family lineage, and our shared interest in Star Wars. Al-Marashi is Associate Professor of History at California State University San Marcos. He received his doctorate from the University of Oxford, completing a thesis on the Iraqi invasion of Kuwait, part of which was plagiarized by the British government’s “Dodgy Dossier.” He is co-author of Iraq’s Armed Forces: An Analytical History and The Modern History of Iraq. 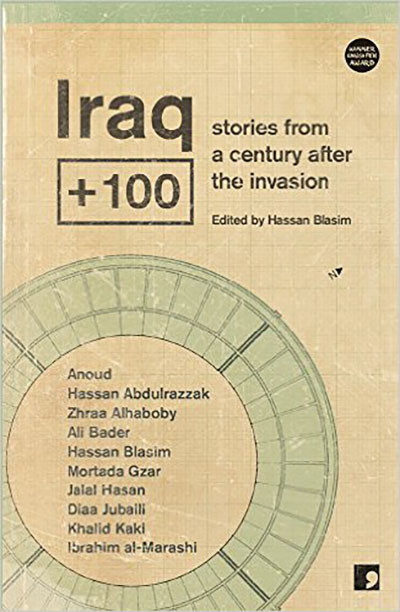 Gabrielle Spear: How did you react when Ra Page and Hassan Blasim reached out to you for Iraq + 100? Had you ever written fiction before, specifically speculative fiction?

Ibrahim Al-Marashi: Actually, I approached them after seeing the call for contributors. I had always been a fan of speculative fiction, and this call provided me with a chance to make my first foray into this genre. I wasn’t sure if they would even entertain my contribution given it asked for pieces from Iraqi writers and I was part of the diaspora. As the volume came together, it turned out that most of the contributors lived outside of Iraq, a sad testimony to the cultural brain drain the country has endured over the last couple of decades.

GS: What speculative books or movies did you rely on for inspiration? (Your story felt very much like an Iraqi-spin on Star Wars, with the character Jidu cast as an Obi Wan figure. I hope you take this as a compliment.)

IA: A compliment indeed. Yes, I am a Star Wars fan, and that influenced my choice of terms such as “droids” in the story. I’ve used the franchise to make my classes on Middle East history a bit more tangible for students first exposed to the region. I see elements of Sufi orders in Obi Wan and the Jedi, or I explain Edward Said’s Orientalism by telling students to think about the Middle Eastern motifs surrounding Jabba the Hutt, who smokes a nargila and maintains a harem, which included Princess Leia.

So, while Star Wars does provide an inspiration, my story is more influenced by the writer Philip K. Dick and his work Do Androids Dream of Electronic Sheep (made into the film Blade Runner), and the French thinker Jean Baudrillard, whose oeuvre provided the inspiration for the Matrix franchise. Without giving away the ending of my story, I found that those works bring up philosophical issues of how one determines reality in an age of digital and virtual reality.

GS: How much of Najufa is the story of your own family's lineage and experiences?

IA: It is entirely based on my first trip to Najaf and Kufa as an adult with my father and mother in 2010. The tensions that drive the relationship between the narrator and Jidu is based on the tensions I had with my own father during that trip. While my father was born in Zanzibar, his father left Najaf during the waning days of the Ottoman Empire. My father went to medical school in Baghdad in the sixties and would visit Najaf and his relatives there often. I expected the trip in 2010 to be a grand "home coming," but he seemed oblivious to the whole place or experience. He was more concerned with drinking tea and relating his life experiences to any random person in the teahouse rather than visiting the shrines there.

GS: In your story, droids are both a blessing and a curse. Their advanced technology detects car bombs, freeing Iraqis from humiliating interrogation and trauma at checkpoints. And yet droids make slower, more cherished aspects of Iraqi culture, like drinking tea, happen instantaneously. Why did you make this literary decision? Where do you see these tensions playing out in the present day?

IA: That aspect of the story was based on the fact that cell phones are not allowed within the confines of any shrine since terrorists use cell phones to detonate explosives remotely. You have to check in your cell phone outside the shrine, like a coat check. Within the Najaf shrine, I remembered how the younger pilgrims became fidgety, anxious if they had any missed calls. So, I felt a disconnect between the spirituality of the place and how I began to think about something as mundane as a missed call. Of course that phenomenon is no different from life anywhere else in the world. We are living in a techno-addicted world. But in Iraq, whether it is a terrorist or a pilgrim, the phone had become an extension of ourselves, and it was in Najaf that I realized we are essentially cyborgs, human-techno hybrids, where the phone might as well be an extension of ourselves. The droids in the story are a reflection of that phenomenon.

GS: Najufa begins in "Baghdad International Airhub" with a passport embedded in the main character's finger, a detail that feels all the more futuristic and impossible in light of Trump's executive order. Out of the many topics that could be tackled, why did you choose to focus your story on freedom of movement in particular?

IA: Of course, I wrote the story before Trump’s ascendancy to the White House, and that aspect of my story reflects my life where my freedom of movement has been hindered since 9/11. I have both American and British nationality, and was born in the U.S., yet I still face difficulties travelling. In the U.S., I’ve been subjected to secondary searches well before Trump became president. But what really angers me is the difficulty I have travelling within the Middle East. For example, take a country like Jordan. The border officials see my passports, but they want to know where I am really from. They assume my passports are fake, pull me to the side, and want to make sure I’m not one of the million Iraqis seeking refuge in the country.

The scene in the Airhub is actually inspired by the arrivals section of Terminal 5 in Heathrow.  I simply scan my British passport in a machine, it takes my picture, and I’m allowed entry into the UK within seconds. Thus, the Airhub is my wish that future travel for everyone would be as seamless as it is for me entering the UK.

GS: Unlike some of the other stories in the collection, where religion is deemed no longer necessary or ultimately seen as a destructive force, the Najaf in your story remains a holy pilgrimage site for Muslims, evolving with the technological advancements and outlasting the "Sectarian Wars" of our present time. Why did you choose to portray the characters' relationship with Islam in this way?

IA: Actually, it reflects a personal bias and I suppose it reflects the long history of my family. I’m a descendent of the fourth imam in Shi’ism, Ali Zayn al- ‘Abidin, who was the sole male survivor of the battle of Karbala in 680. Another of my ancestors Mir-i Bozorg was a religious scholar who established the Marashi Dynasty on the Caspian, lasting from 1359 to 1596. I had another illustrious ancestor, Nurallah Shustari, who was a cleric and judge in the Mughal court in the late 1500s. Finally, my grandfather was a cleric in Zanzibar. My assumption was, given my family’s long connection to faith in the past, that trend would continue to the future.

GS: As a historian of Iraq and the Middle East, who obviously spends a lot of time focused on past and present events, why do you think it's important to speculate about Iraq one hundred years into the future?

IA: As a historian, I’ve seen how this process of using sci-fi to deal with real events has numerous precedents since the genre developed. H.G. Wells’ book, War of the Worlds, is a commentary on the British role of the extermination of the local population of Tasmania, while the Godzilla franchise, or the post-apocalyptic genre of Japanese manga, such as Akira by Katsuhiro Otomo, are imaginative spaces to deal with real trauma, the dropping of the atomic bombs on Hiroshima and Nagasaki.

By projecting into Iraq’s future, Iraq’s reality is highlighted in the present. That’s what attracts me to speculative fiction. While as a genre it is escapist in nature, it simultaneously brings our current reality into greater focus. Science fiction becomes embedded in political fact. Sci-fi reveals our anxieties of the convergence between science, automated realities, and what it means to be human. My story sought to bring our current techno-phobias, and combine them with Iraq’s real problems that began after the 2003 invasion. Prior to our book, Iraq had become an imaginative sci-fi space for challenging the 2003 invasion in Western entertainment. Films like Avatar critiqued the rise of mercenary companies, where the planet Pandora stands in for Iraq. The reboot of Battle Star Galactica portrayed the Cylons as the Americans and the humans resisting them as the insurgents, forcing TV audiences to see the conflict from an Iraqi perspective.

GS: If you could dream up the United States ten years from now, where has the U.S. rebel alliance against Trump taken us? What new world have we written into existence?

IA: I do see eerie coincidences between Trump and Chancellor Palpatine, and Steve Bannon is his Darth Vader, a comparison that Bannon apparently relishes. In terms of the rebel alliance, it brought together far ranging planets and galactic groups, like Admiral Ackbar, the squid-like commander from the Mon Calamari, to the Ewoks. And in this regard, today the rebel alliance includes American constituencies ranging from Muslims, Latinos, women, LGBT groups, and just the random American-turned-activist. Not to mention the rallies that have erupted all over the world against the Trump presidency, a galactic wide resistance if you will. These groups in the past would have no reason to come together until the rise of Trump. And that rebel alliance is the new world we have written into existence.

Gabrielle Spear is an Associate Editor for Warscapes. Twitter @gabriellejspear

The Madman of Freedom Square
Paperback
$11.01
Buy from amazon.com

column by Esther A. Armah
An Open Letter to Ice Cube and All the Brothers Supporting Him
Reviews by Nirupa Umapathy
The War on Terror Goes on Trial
column by Esther A. Armah
the STAYED and the STOLEN: Emotional Economy and the 1619 Project
blog by William D. Hartung
Merger Mania: The Military-Industrial Complex on Steroids
Opinion by Mohamedou Ould Slahi
Open Letter to the President of Mauritania
Literature by Valérie Gruhn
Mosul Journal
Conversations by John F. McCreary
Reading North Korea
Conversations by Michael Bronner
Saudi-led Coalition Launches Huge Airstrikes on Yemen's Capital
Art by Melissa Rodriguez
Art becomes therapeutic for refugees
blog by Warscapes
Literature of the Banned Seven
Like any of the articles? Support our work.
Donate Now