A seeing person reads two main things on the street, suggests Ermias Ekube: road signs and human faces. The former, he describes as some of the simplest symbols that an urban-dweller can read—the latter, among the most expressive and expansive. Ekube plays with the juxtaposition of these elements in some of his latest bodies of work, which he says present an exercise in questioning. “I always try to explore the three-fold psychology of the human being—the individual, the social, and the universal. I could not handle the one without the other, to capture my vision of the human condition in our time.”

Ekube intends this work to pare life’s complexities down into simpler symbols and gestures, while opening himself and the viewer up to what he considers the most intriguing questions in the world today: Whose life matters? Where does life matter more? When does life matter more? These questions are more concrete than the ones he normally explores, but are ones he believes every person can and should ponder. They are seeded in his own experiences, of “living in different places and societies… witnessing lives wasted in prisons, in wars and migrations caused by issues of race and social class... and rooted in discrimination.”

There is discrimination in what and how we see, too, Ekube believes; images often carry such discrimination, fermenting it into deeper vengeance and hardening the value hierarchy of lives. In his drawing titled watching action film (boats on Mediterranean), he tries to convey that as we get accustomed to shocking images—of police brutality, of children washed ashore or sitting in shell shock—many see an action movie before seeing the people and the lives affected. He speaks of reintroducing the fragility of life through “expressions of tension and balance… and delicate objects [like eggs and paper boats] that are very much related to the ever-growing uncertainty, the nonstop forced dislocations, the continuous loss of thousands of lives.”

Ekube’s work is pregnant with questions: whose life matters? When? Where? How?  “I feel most of our contemporary socio-political systems are leading us far away from humanity,” he says, explaining why he feels compelled to explore these questions through artwork. “By its nature art is a highly spiritual activity. Its role may be to remind, to raise consciousness in humanity, in life. To propose a new way of seeing for a possible harmony [rather] than friction between people. To present the problems for possible solutions.” 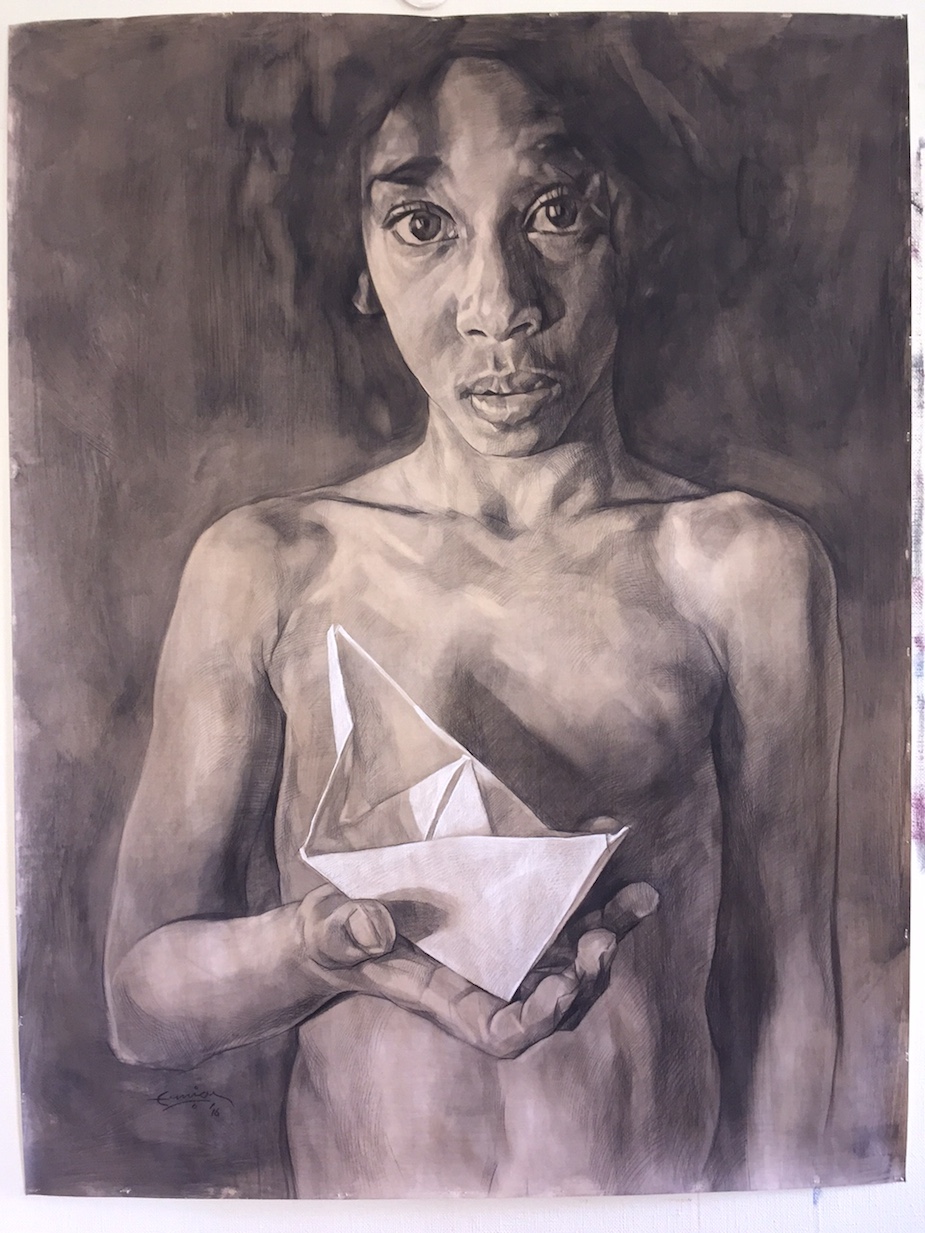 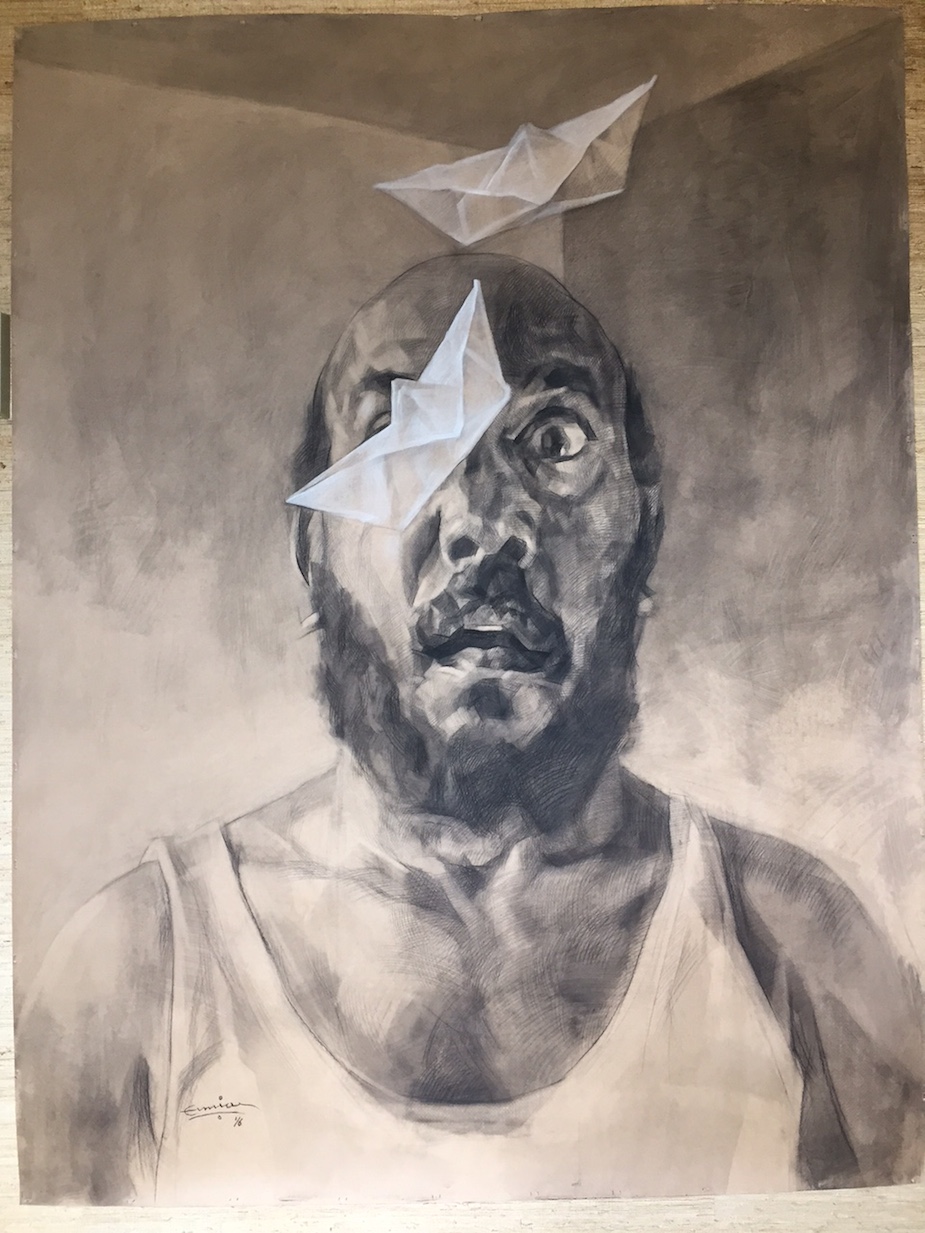 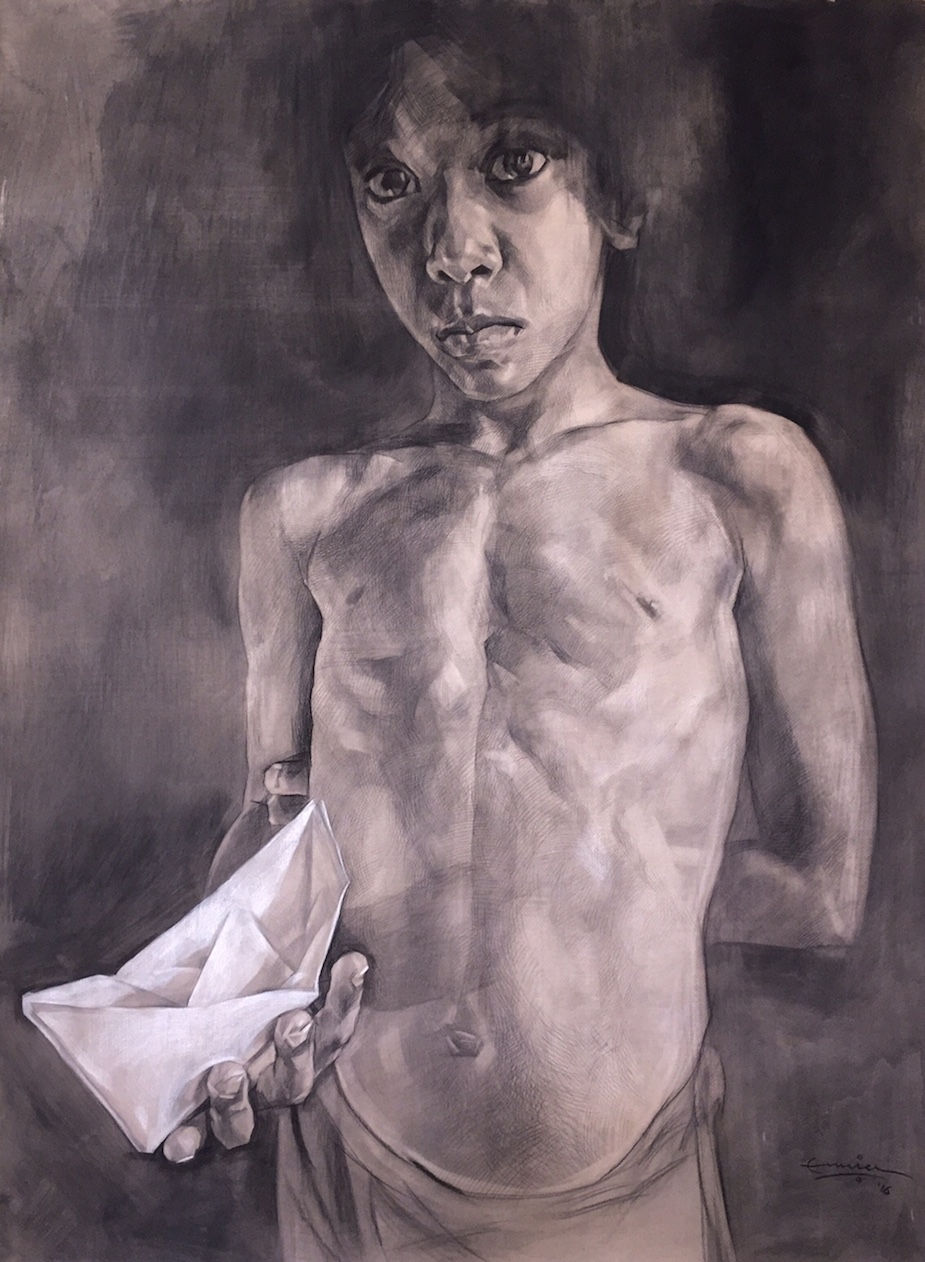 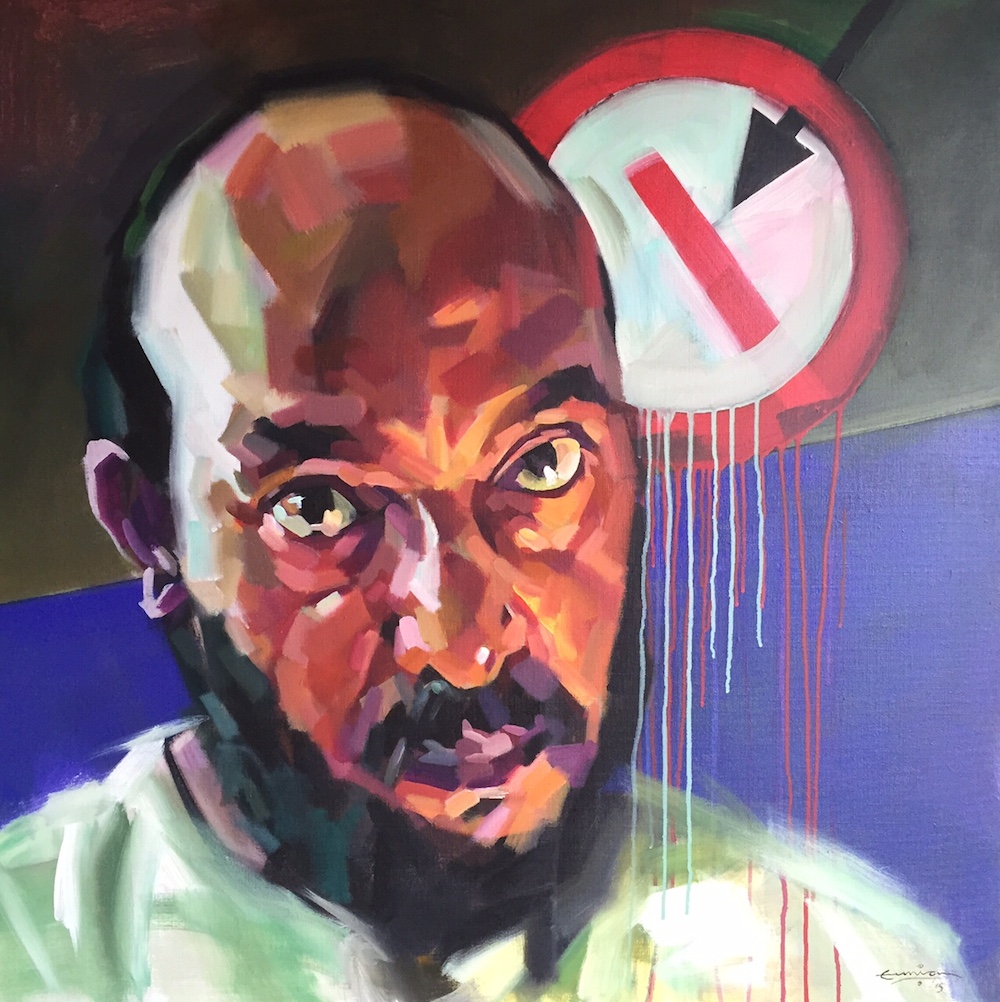 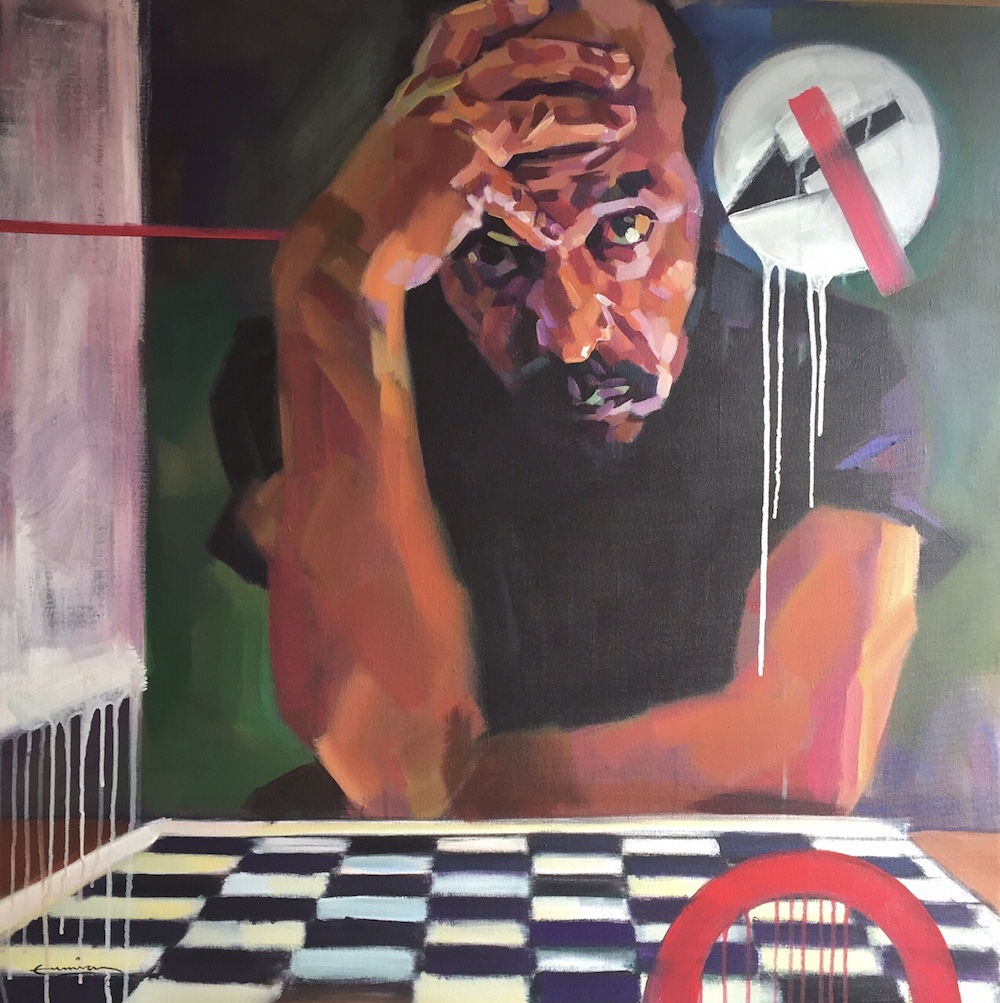 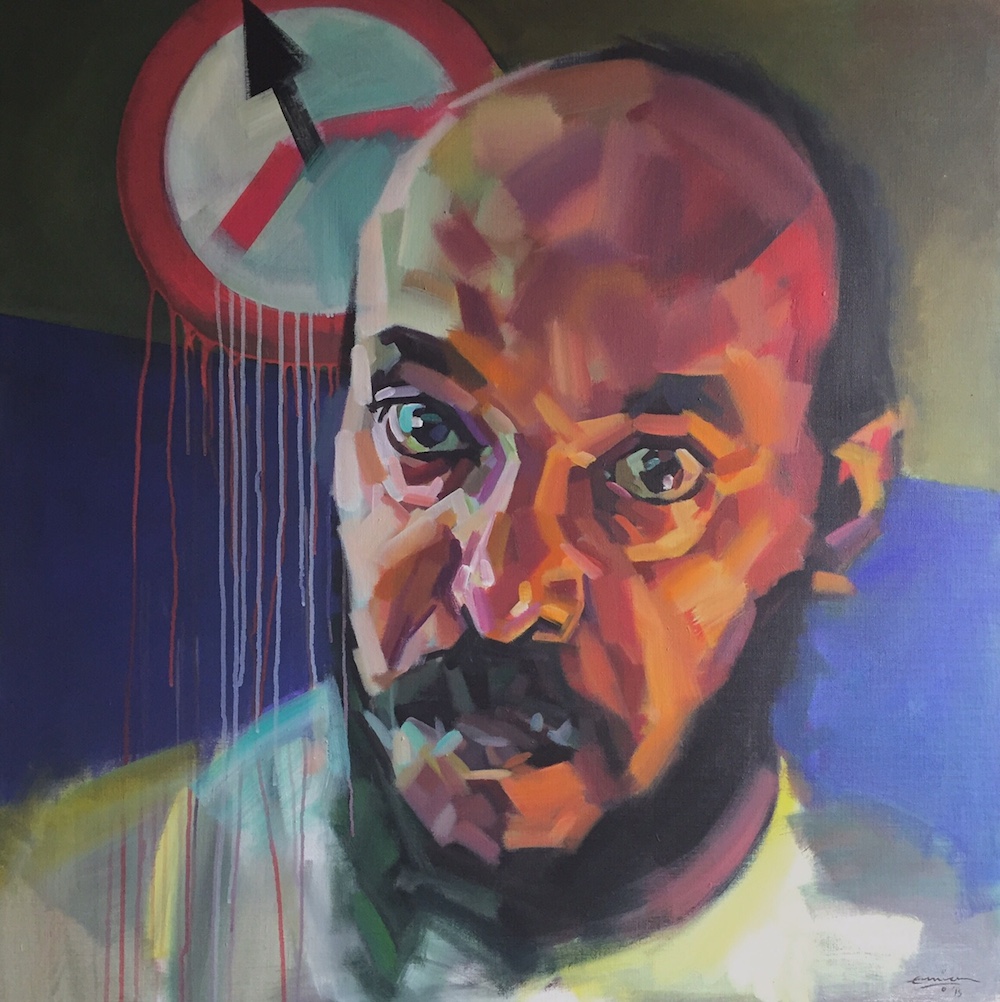 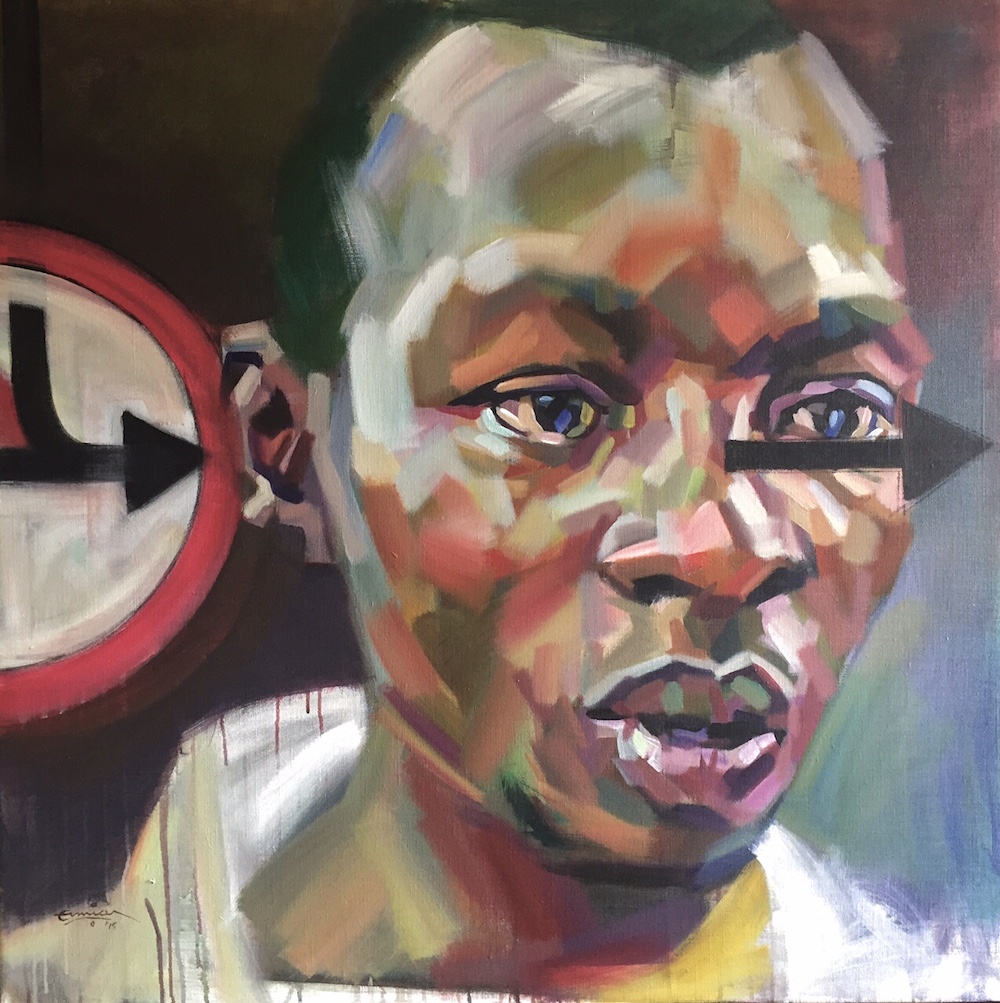 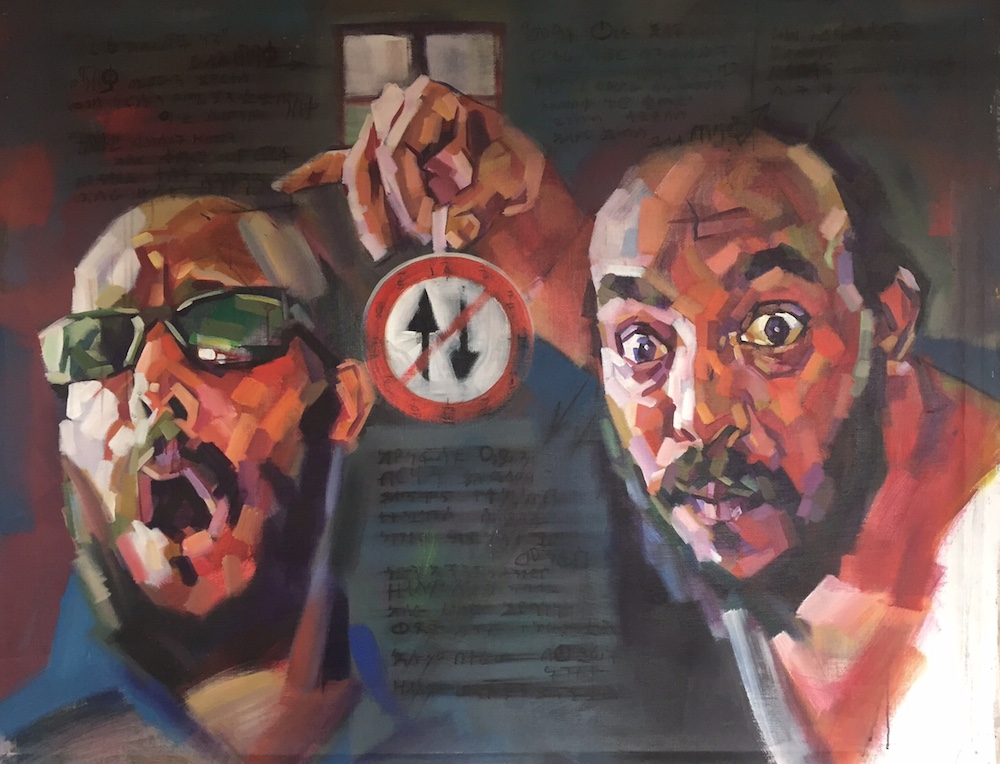 When does life matter more, charcoal on paper, 160x125 cm 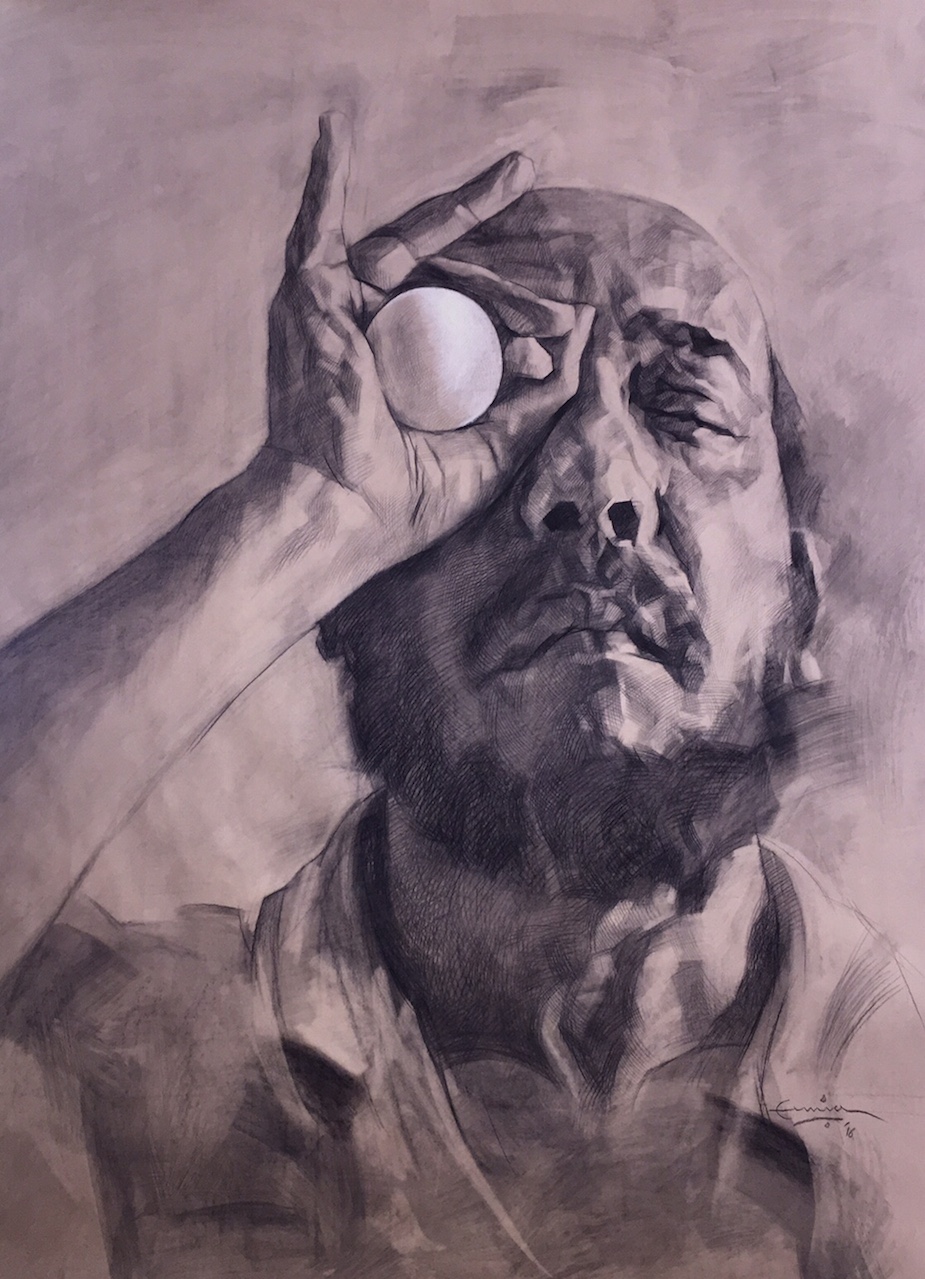 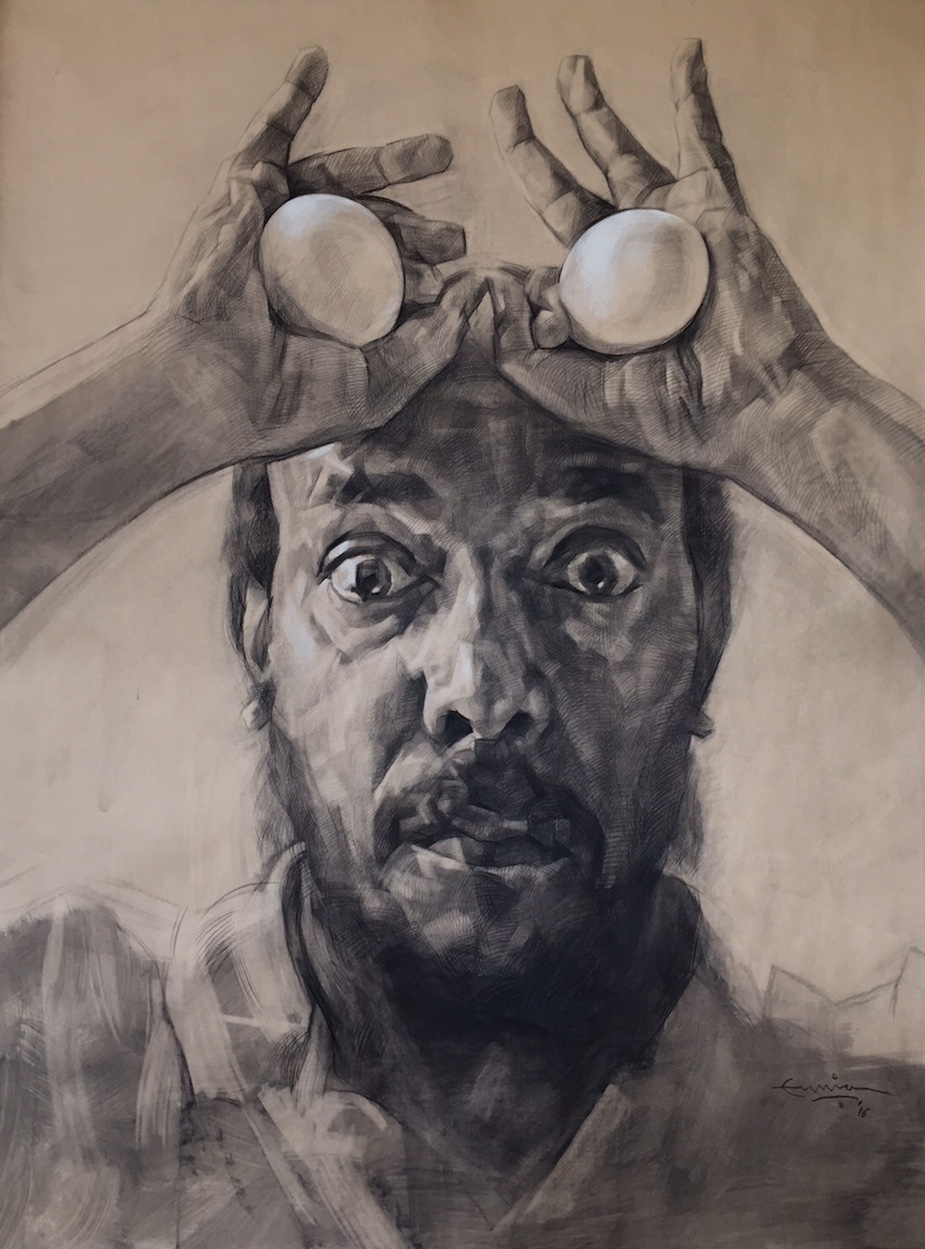 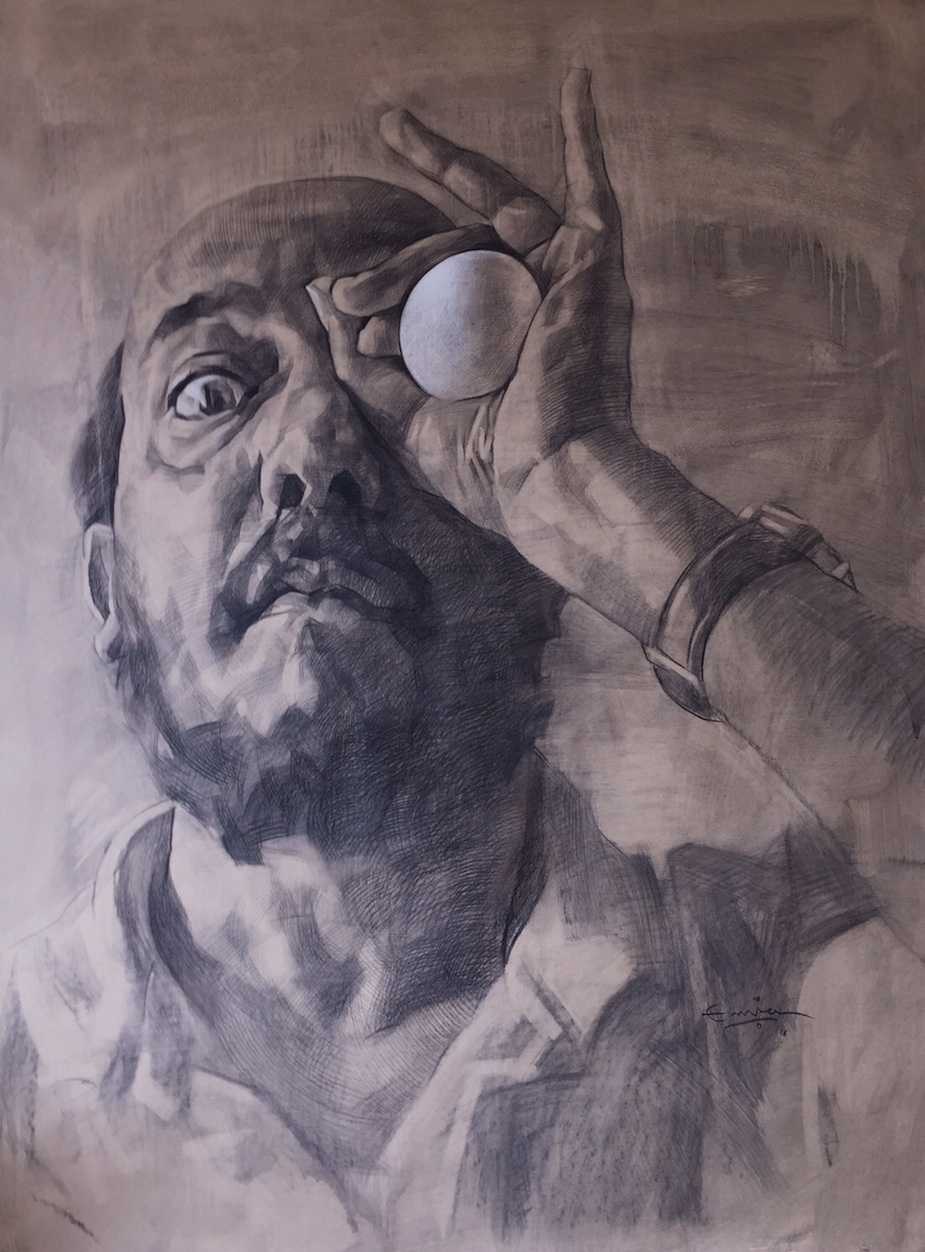 Ermias Ekube was born in 1970 in Addis Ababa, Ethiopia, where he studied at the Addis Ababa University School of Fine Arts and Design (DFA, 1990). He practiced in his studio and participated in group exhibitions in Addis Ababa until relocating to Eritrea in 1997. There, he taught at the Asmara School of Fine Arts, which he co-founded in 1994, co-produced arts education books, and conducted workshops and mentored young artists. He has participated in several group exhibitions in Africa and Europe and mounted solo exhibitions in Eritrea, Ethiopia, Kenya, Tanzania, Swaziland, Djibouti, Norway, Italy and Sweden. In 2001, he was a resident at an Artist in Residence Program in Trondheim, Norway. In 2012-2013, he moved to Kenya and worked in a communal studio at Kuona Trust, Center for Visual Arts in Kenya, where he also conducted life drawing workshops. He had number of exhibitions in Nairobi and actively participated in the contemporary Kenyan art scene. Currently he lives and works in Sweden.

Literature by Abdi Aden Abdi,
Dadaab Corona Notebooks
column by Esther A. Armah
BEWARE! Statementism and Tweak-o-nomics
blog by Warscapes
Questioning Racism in the Indian Diaspora: Cultural Perspectives
Conversations by Nathan Suhr-Sytsma
What binds us, in this boat: Poet ‘Gbenga Adeoba on migration
blog by Warscapes
Open Call: The Corona Notebooks
Reviews by Kerry Carnahan
Nathalie Handal: A No-State Solution in Poetry
Reviews by Nirupa Umapathy
The War on Terror Goes on Trial
Opinion by Jehan Bseiso
No Search, No Rescue: Support and Empathy is a Radical Action
blog by Cinzia D'Ambrosi
Deathscapes amplifies horror of deaths in custody
Conversations by Raphaël Thierry
Sarah Ladipo Manyika and New Literary Geographies
Like any of the articles? Support our work.
Donate Now