On May 13, 1985, one of the blacker days of the U.S. war on its domestic black population, the Philadelphia Police Department undertook the aerial bombing of an African-American neighborhood in the city where members of the radical group MOVE had taken up residence.

Firemen were instructed not to quell the raging fire that resulted. Six adults and five children were killed, and more than 60 homes were destroyed in the blaze. No criminal charges were filed against city officials, but Ramona Africa—the sole adult survivor of the MOVE contingent—was thrown in prison for seven years.

“The courts of the land turned a blind eye, daubed mud in their socket, and prosecuted Ramona Africa for having the nerve to survive an urban holocaust, jailing her for the crime of not burning to death.”

This, of course, is merely one of many creative categories of criminal behavior uniquely available to black Americans over the years. The just-released volume Writing on the Wall, the first comprehensive selection of Mumia’s short prison commentaries from 1982 to the present, is a handy resource for keeping track of some of them.

A dispatch on Amadou Diallo, for example, contains Mumia’s assessment of what had prompted New York City police officers to unleash 41 bullets on the unarmed immigrant from Guinea in 1999. Diallo, Mumia reasons, had “committ[ed] the capital crime of ‘standing while black’—SWB.”

A 2006 piece titled “No Safe Age” speculates as to the transgressions of an elderly woman shot to death in her Atlanta home by narcotics officers: “What was her crime? Trying-to-Survive-to-90 While Black?”

(It was subsequently revealed that, in an attempt to cover up their own crime, the cops had planted drugs in the woman’s basement. Her name was Kathryn Johnston, and she was in fact 92.)

In the past year alone, we’ve learned that other activities like Having a Toy Gun While Black and Breathing While Black can also serve as extrajudicial death warrants. In the case of Freddie Gray, the 25-year-old dispatched to the afterworld by Baltimore police in April, the crime was Running While Black—a pretty logical reaction, one might say, to the sighting of law enforcement officers.

As for Mumia himself, he was accused of fatally shooting a Philadelphia police officer in 1981 and subjected to a farcically unfair trial; at one point, the court stenographer reported overhearing the judge declare: “I’m going to help them fry the nigger.”

But it seems that Mumia’s real crime—the real danger he poses to society—is Thinking While Black. For throughout his work he relentlessly connects the dots, revealing the foundations and contexts of individual and communal oppression and exposing the inextricable links between anti-black policies at home and punitive imperial machinations abroad. 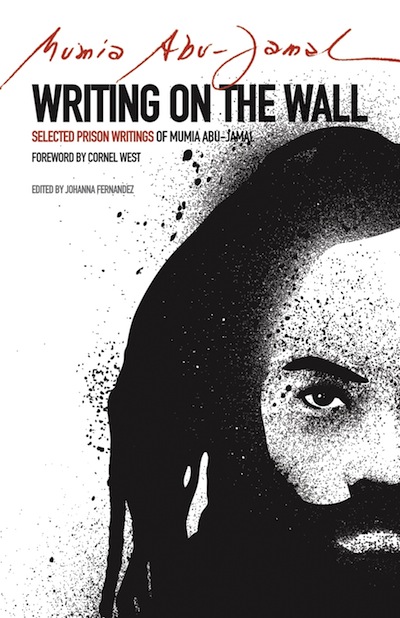 In one particularly relentless commentary included in Writing on the Wall, Mumia affirms: “What happens overseas has its genesis in the monstrous history of what happened here: genocide, mass terrorism, racist exploitation[,] land-theft and carnage. All of these horrors have been echoed abroad, shadows of hatred, xenophobia and fear, projected from the heart of the Empire outwards.”

As it so happens, the heart of empire also imports the fruits of its exported exploitation. When police murdered a black teenager in Missouri last year and community members reacted in rational fashion, Mumia explains, “the government responded with the tools and weapons of war… attack[ing] them as if Ferguson were Fallujah.”

History professor Johanna Fernández, editor of Writing on the Wall, contends in her introduction to the collection that “today, in this moment of renewed upsurge against racist state violence, [Mumia’s] voice is more dangerous than ever.” The danger he poses is not merely local. In exposing the structures of violence that underpin the globe, he covers topics ranging from corporate plunder to the neoliberal assault on workers’ rights to Israel’s dispossession of the Palestinians to the enduring lessons of the slave revolt that brought independence to Haiti in 1804: “Masses make and sustain revolutions—often against ‘leaders’ whose every instinct is to betray them.”

Given the United States’ present position at the epicenter of inhumanity, it’s not surprising that Mumia’s overarching focus would be the belly of the beast and its all-consuming system of racist capitalism. He’s especially well-placed to comment on the prison industrial complex, having spent over 33 years in jail—most of that in solitary confinement on death row.

In a 2006 commentary, Mumia poses the question: “Is it mere coincidence that the most notorious guard at Abu Ghraib worked right here, in the United States; here, in Pennsylvania; here, in SCI-Greene prison, for over six years before exporting his brand of ‘corrections’ to the poor slobs who met him in Iraq?”

The answer: no, because “the roots of Guantánamo, of Abu Ghraib, of Bagram Air Force Base, of U.S. secret torture chambers operating all around the world, are deep in American life, in its long war against Black life and liberation.”

In another commentary, Mumia offers an even simpler equation: “Abu Ghraib is us.”

Of course, the American ruling class can’t acknowledge the political and financial expediency of condemning vast sections of the human population to inferior and criminalized tiers of existence. So scandals like Abu Ghraib, or the murder of Florida teenager Trayvon Martin for Wearing a Hoodie While Black, are portrayed as having occurred in a vacuum—anomalies that are the product of a few unhinged individuals rather than an unhinged system.

And while many point to the proliferation of black politicians and other elite as supposed proof of the magical disappearance of racism in the U.S., Mumia tells it like it is: “Black faces in high places does not freedom make.” What is achieved, on the other hand, is a “new diversity over the same system of repression”—“some Black management for this Menagerie of Pain.”

Which brings us to the matter of the current president. Prominent black public intellectual Dr. Cornel West, author of the foreword to Writing on the Wall, recently lambasted black writer Ta-Nehisi Coates for what he said was a studious avoidance of criticism of Barack Obama and other harmful phenomena. “Without an analysis of capitalist wealth inequality, gender domination, homophobic degradation, Imperial occupation… and collective fightback (not just personal struggle),” West wrote, “Coates will remain a mere darling of White and Black Neo-liberals, paralyzed by their Obama worship and hence a distraction from the necessary courage and vision we need in our catastrophic times.”

In Mumia, on the other hand, West finds the exact opposite: a “writer for the people” who is “engaging in a completely unfettered analysis of systems of domination— capitalism, imperialism, patriarchy and so forth—and calling for a new world that requires fundamental transformation, a revolutionary transformation of the status quo.”

For the system of domination that is America, where thinking outside the box is highly discouraged, Mumia constitutes a downright national security threat—particularly since his decades spent literally inside a box haven’t managed to eradicate his deep humanity.

It’s with good reason West concludes that, “in mind, soul and spirit, [Mumia] continues to be one of the freest men imprisoned in the early part of the 21st century.”

column by Esther A. Armah
An Open Letter to Ice Cube and All the Brothers Supporting Him
blog by Warscapes
Questioning Racism in the Indian Diaspora: Cultural Perspectives
Opinion by Andrew Ryder
Two Decades of Struggle Against Racist Police Violence
column by Esther A. Armah
How To Talk About Racism in Britain
Reviews by Arpita Mandal
Nation as Parent in Netflix's Delhi Crime
blog by Ismail Einashe
Morocco celebrates migrants through arts and culture
Reviews by Anna Ziering
like i got a right to say: Aja Monet's My Mother Was a Freedom Fighter
Literature by David L. Lukudu
Ahmed Suk Suk
Opinion by Léopold Lambert
The Testimony of an Object: Le Pen and the French History of Violence
Reviews by Michael Paye
The Siege of Jadotville and Imperialist Aesthetics
Like any of the articles? Support our work.
Donate Now