Bangkok’s little-known population of Pakistani asylum seekers uses community action to respond to the challenges facing refugees without a camp.

In an unremarkable concrete apartment block on the outskirts of Bangkok, over 100 families from Pakistan wait.

They are a fraction of the 8,000-strong population of refugees and asylum seekers in Thailand’s largest city, but they are also representative of the two-thirds of Asia-Pacific’s 3.5 million refugees who now live outside of camps; no region in the world has more. An increasing number of these individuals are from Pakistan, which occupies an unusual position as both a host for and the origin of large numbers of forced migrants. In 2014, it was the world’s sixth largest source of asylum seekers as well as a nation accommodating 1.5 million refugees—today, in this regard, it is second only to Turkey.

Having often arrived in Thailand on tourist visas which have long since expired, asylum seekers wait for a series of UNHCR interviews to determine their refugee status, a process which can take five years or more. The stress during this period can be “overwhelming,” according to Sharonne Broadhead, community outreach coordinator for Asylum Access Thailand, a legal aid and advocacy organization.

“Every man loves his country. No one wants to leave [their] country,” one man said, a 34-year-old father of two, whose body bears multiple scars from healed bullet wounds which he says he endured after surviving an extremist attack on a mosque. “But we cannot live there,” his sister added. Preferring not to be named, she worked as an instructor in a vocational college, but lost her job when it was uncovered that she was Ahmadi, a believer in a small but growing Islamic sect persecuted in her homeland. “I lost my job—I loved my job. People said, ‘you cannot [say] asalaam aleikum. You cannot go to mosque.’ They attacked me and my husband. People gave me sexual abuse. My life was in danger. I lost everything.”

The awareness that their lives are paused is constant, and the idea of not having to remain in Thailand indefinitely “is a coping mechanism as well as a hope,” explains Anoop Sukumaran, director of the Asia Pacific Refugee Rights Network (APRRN).

When asked to which country they wish to be resettled, the answer is almost always the same. “Anywhere from here,” Safia, a 25-year-old teacher, shrugged. “Conditions are tough.”

Thailand hosts around 130,000 refugees from Burma in camps along the Thai border, in addition to 8,000 urban asylum seekers from over 40 countries; estimates of unregistered and unrecognized refugees place that number much higher. Yet Thailand is not a signatory to the 1951 Convention on Refugee Rights, meaning that there is “no national legislation to regulate the presence of refugees and asylum seekers,” explained Vivian Tan, regional spokesperson for the UNHCR. Urban refugees are effectively classified as illegal migrants and subject to arrest, detention and deportation. In Thailand, refugees and asylum seekers are banned from seeking employment. Unable to return to their original professions, they sell off pieces of gold jewelry brought from home, find work as day or night laborers, and rely on remittances from relatives abroad.

Back home, these families were largely urban and well educated. “Most [of these] refugees will be from the middle class,” said Sukumaran, describing Bangkok’s Pakistani population. “The most vulnerable groups don’t make it here.” 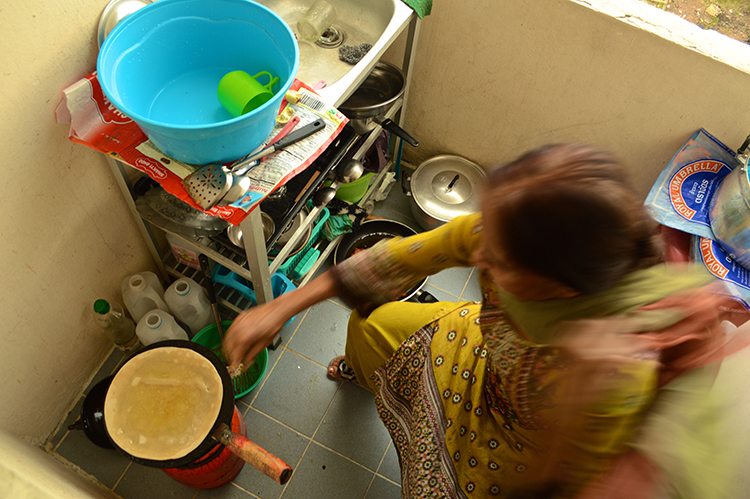 On the balcony of her apartment, a woman fries paratha for breakfast for her family. Traditional dishes like biryani and chicken karai are cooked on a single gas hub and often served on the families’ beds, which take up most of the space in the room. (©Sally Kantar) 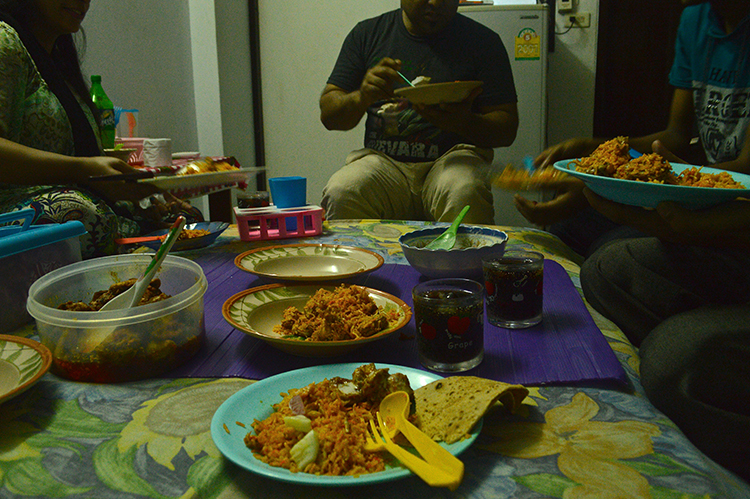 A Christian family shares a biryani dinner with a Muslim community member in their apartment. Refugee Help Refugee (RHR), a community-based organization with Ahmadi, Christian and Sunni leadership, once fundraised in order to deliver beef to Muslim families for the Eid festival and food packages for the Christian families on Christmas. (©Sally Kantar)

Down the dark, tiled halls of the building, the adhan, the Muslim call to prayer, can be heard echoing from a nearby Thai mosque. But due to both a fear of authorities and discrimination against Ahmadis, these families pray indoors, rather than venture out. “We can’t go to the mosques here,” said Safia. “It’s very isolating.”

The religious demographic of this community is representative of the Pakistani diaspora in Thailand: half of the building is Ahmadi, half Christian. The diaspora’s proportions are significant, considering that Christians account for less than two percent of the population of Pakistan, and Ahmadis comprise only slightly more.

Each faith has its own prayer room here, but religion is visible within private living quarters as well. Inside some rooms hang portraits of Mirza Ghulam Ahmad, the 19th century founder of the Ahmadiyya movement, and his successors. Christians, too, declare their faith with pictures—of Jesus Christ, an assertion of identity taped on the outside of apartment doors.

Both groups are targeted by Pakistan’s Blasphemy Law, which has been criticized as institutionalizing discrimination against religious minorities. Because Mirza Ghulam Ahmad once declared himself a Mahdi, or messiah, it decrees punishment for Ahmadis who call themselves Muslims. The law has also led to accusations against many Christians of desecrating the Quran. Perhaps due to the tension produced in this volatile environment, mistrust over religious differences can accompany these communities abroad. “There is an incredible amount of resilience they get through their faith,” said Sukumaran. “But it acts as both a positive and a negative.”

Using activity books originally designed for Burmese educators—many of whom belong to refugee communities in Thailand—a group of Pakistani women participate in a locally organized teacher training session affiliated with their community’s informal school. The risk of arrest in public spaces and a lack of Thai language skills often makes it difficult for refugee parents to send their children to Thai government schools. Non-formal community based schools have formed in response to the need for primary education in the host country. (©Sally Kantar) 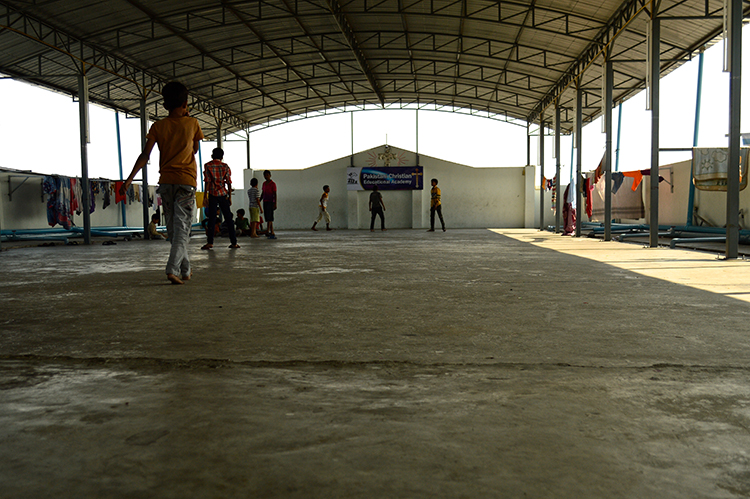 Pakistani children play handball under a banner paid for by a Christian organization. Religion is a source of both strength and division in the refugee community. Some have tried to alleviate the divide; in 2014, a Muslim community member purchased a Christmas tree for the Christian prayer room. If funding allows, there is talk of the Christian prayer room soon being host to a small refrigerator where families can leave leftover meals for those of either faith who might be in need. (©Sally Kantar)

For more than thirty years, Thailand has been host not only to an influx of regional refugees, but to a debate about whose duty it is to support them. “Asylum is a primarily a State responsibility in any country,” explained the UNHCR’s Vivian Tan. “This means that a host government should shoulder the main responsibility for protecting and assisting refugees on its territory.”

Until this responsibility is realized, Tan says, the UNHCR has provisions for basic education and primary healthcare. There are subsistence allowances for “the most vulnerable refugees,” but this leaves the vast majority of urban refugees responsible for their own costs of survival in Thailand and with few guaranteed mechanisms for basic protection.

The ambiguous legal status of refugees often makes access to a host country’s social services—such as subsidized healthcare—difficult, if not impossible. “If you have no money, then no treatment,” said 42-year-old Azhar. In 2014, the Pakistani father of three suffered an accident in a Bangkok swimming pool which broke his back and left him paralyzed. He is slowly regaining the use of his arms and legs, and keeps a list of expenses which he struggled to pay for himself, including medicines, physiotherapy, hospitalizations. “I was in this condition for seven months, and no organization came to visit me,” he said.

Effectively supporting urban refugees remains a challenge—logistically, legally and financially. The UNHCR reports that its budget “grew steadily” for five years until 2011, but in 2012, Thailand’s in-country operations were separated from the regional budget. This preceded an increase in the number of urban asylum seekers from 2,000 to 8,000 in 2013, many of whom were from Pakistan. This number has since plateaued, but funding remains stretched. “Everyone is a lot worse off than they were three years ago,” said Asylum Access Thailand’s Sharonne Broadhead, of the financial state of humanitarian organizations assisting urban refugees.

As demand grows and budgets shrink, urban refugee communities have begun to source solutions from within.

Refugee Help Refugee (RHR) is one such initiative. “Our cause is to work for all the refugees, not only Pakistanis,” said Ali, the organization’s 31-year-old founder. Now in its second year of operation, RHR has over 1000 members and fundraises to release refugees from detention, distributes food to families in need, and has opened a non-formal school for the community’s children in the apartment building’s vacant rooms.

But the resources available to community-based groups are limited and incomparable to that of international NGOs—at RHR, there are no salaries, and there is no office. “Rent, stipends for teachers—small bits and pieces can make a big difference,” explained Sukumaran, whose regional network provides a platform for smaller groups to unify for capacity building and advocate for policy change. The involvement of larger organizations in community-based initiatives can bring transparency and accountability to these efforts, he added. There is a push to acknowledge and strengthen “the agency of refugees,” to encourage community action which addresses the state of perpetual uncertainty. “They are saying, ‘while I’m waiting, I’m going to do something about it.’”

“There are slivers of hope,” Sukumaran said. “And we have to hang on to these every now and then.”

Feature Image: A Pakistani man looks out over the nondescript suburbs of Bangkok where his community now lives. (Sally Kantar)

Sally Kantar is a social justice educator and freelance journalist focused on Southeast Asia. Her written work has been featured in regional publications as well by as the University of San Diego's Women PeaceMakers Program. She holds an MA in Conflict Resolution from the University of Bradford and a BA in Journalism from Michigan State University.