it’s noon and people are leaving

know now to keep their distance

all that remains blank stone faces

the stones we use to hide behind

and call it living the sun grows pale

even it gets tired of trying so much

and the sky dims with it light fading

into moonlight the air turning thinner

as it does all is grey and deserted

only the sound of rock on rock

the slow clatter of shards sand

dust against dust the earth claiming

its own once more gravity prevailing

soon soldiers will be coming walking

at doorways shouting into gaps

where windows once were moving

from ruin to ruin block by block

leaving nothing behind them even

at this distance we can hear them

climbing towards us coming nearer

at the highest reaches survivors

have gathered telling their stories

tending to wounds knowing it’s only

a matter of time until they get here

we can say this the dark circles

in the desert ringed with ash

smoke having gone its way

those circles with shoeprints

or the outlines of feet of legs

of palms dragging those circles

in the desert within larger circles

black and burning where not even

the spirits are left ones unburied

never washed prayed over not

even the spirits are left there

but have to make their way

to refugee camps for the dead

so many of them now moving

slowly nowhere to go they

no longer remember the circles

with bits of clothing bone

where a stone passes through

echo of what broke the surface

but this is the desert all thickness

a surface without end where

nothing ripples nothing echoes

but silence this is the stone that

hits the water and stops there

its moment of impact preserved

and the darkness from it spreading

Harry Newman’s poetry has appeared widely in American journals.  About his two poems, on Warscapes, Newman explains, "These are poems of collapsing distance, the moral distance of war and political violence. Brutality and dehumanization in one location inevitably find their way closer. “Impact area” is a formal term designating the area spanned by the detonation of a mortar or missile. Cliff Dwellers are those aware of the horrors to come - though there’s only so far you can climb to escape them." His plays have been presented at theaters across the U.S. as well as in The Netherlands and Germany. He currently lives in New York. 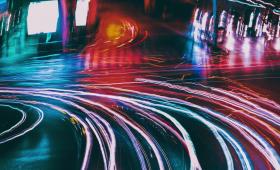 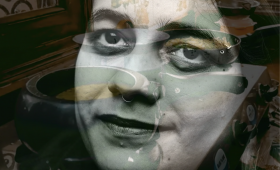 blog by Warscapes
Open Call: The Corona Notebooks
Poetry by Susan Nalugwa Kiguli
To War Mongers Everywhere
Opinion by Jehan Bseiso
Skyping with Medics in Syria
Reportage by Preethi Nallu
Empower a woman, empower an eco-system
blog by William D. Hartung
Merger Mania: The Military-Industrial Complex on Steroids
Poetry by Louis Girón
From Bác Sĩ Poems
Literature by Valérie Gruhn
Mosul Journal
Opinion by Anonymous
Yemen: A death on the Najran Front
Opinion by Ali Jimale Ahmed
African Solutions for African Problems
videos by
An Evening of Poetry from the Horn of Africa
Like any of the articles? Support our work.
Donate Now