The recent Hollywood release of the musical Les Misérables invites a renewed opportunity to question the relationship between capitalism and resistance in a way more profound than its stage versions. Although both have a timeless appeal in their story of loss and redemption, “the innovations in the movie script are both faithful to the book and helpful to the viewer” because it “fills in the blanks left open by the musical” in its retelling of Victor Hugo’s 1862 classic. These additions allow the viewer to recognize how protagonist Jean Valjean’s bond to Cosette comes out of his struggle against institutionalized oppression.

The film’s plot is set in motion by Jean Valjean who was imprisoned for nineteen years for having stolen a loaf of bread to save his sister’s life. Valjean is not the only character in this work to experience the violence of capitalism. Throughout the movie, characters are consistently deprived of basic needs only to find their voices increasingly silenced the more they struggle to become visible.  Nowhere is this clearer than in the case of Fantine, a working class woman. She is ignored when she cries out for help while being sexually harassed and fired by the factory foreman at the onset of the film. For the factory owner, Valjean, it is only after he tears up his papers and establishes a new identity outside the gaze of the law that he is no longer treated as a criminal. This invisibility is what allows Valjean to own the factory in the first place despite being an ex-con. For Fantine, it is only after she finds herself destitute, sells her teeth, hair, and body that she gives up on fighting for recognition and proclaims, “Don't they know they're making love to one already dead!” Submitting herself to her situation, she shies away from sight after being assaulted in the street.  At this point Valjean notices her and pledges to find her daughter Cosette. For both Valjean and Fantine the answer comes in remaining silent instead of directly taking up arms against those structures that oppress them. Slovenian philosopher Slavoj Žižek states, “Sometimes, a refusal to fight amounts to a much more violent gesture of refusing the entire field that has determined the conditions of the fight; likewise, sometimes, directly striking back is the surest sign of compromise.” (1)

Even beyond the film, the educational aim of Fantine and Valjean’s struggle hasn’t been lost. In large part this is due to an incidental situation with actor Anne Hathaway, who played Fantine in the movie. Hathaway spoke against the ongoing presence of patriarchy in American society after having a wardrobe malfunction at the premiere, and finding photos of her crotch over the Internet. When questioned about the incident, Hathaway responded,

It kinda made me sad on two accounts. One was that…we live in an age when someone takes a picture of another person in a vulnerable moment and…sells it. And I’m sorry that we live in a culture that commodifies sexuality of unwilling participants, which brings us back to Les Mis, because that’s what my character is — she is someone who is forced to sell sex to benefit her child, because she has nothing and there’s no social safety net. 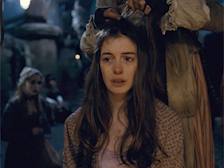 Hathaway’s connection of her experience with Fantine is “brilliant … [because] the culture in which Fantine was forced into sex work is the same culture that slut shames a celebrity. Both are culture[s] where women’s sexuality is commodified regardless of any intent.” Linking contemporary American culture with the struggles of people living in France in the 1800s reasserts the resistance that took place in the film into the modern era where it can continue to act subversively. This maneuver is more powerful than a direct attack on those who snapped pictures of her by seeking legal redress or censorship. Instead Hathaway used it as a moment to become unanswerable to the media landscape that sought to criticize her wardrobe, thereby transforming Les Misérables into something much more than a three-hour spectacle. Her commentary actively invites the viewer to participate in the revolution of the film with the understanding that the struggles the characters face on the screen are the same struggles faced by many who are never captured on camera.

Although Hathaway, Valjean, and Fantine always remain under the grasp of those structures that oppress them, they simultaneously disable the ideological underpinnings that give such structures power in the first place. In their book Global Sex Workers: Rights, Resistance, and Redefinition, authors Kempadoo et al posit that for Fantine, her “sexual acts that serve … economic interests are, within the context of masculinist hegemony, dangerous, immoral…and indecent. Construed in this fashion, the image of the whore disciplines and divides women, forcing some to conform to virginity…and demonizing those who transgress these boundaries." This division causes the other women in the factory to convince the foreman to fire Fantine. Yet, her turning to prostitution ultimately serves as a tool of empowerment even though it results in her death.  By “understand[ing] how women experience and define their sexual acts in commercial transactions…it is possible to move beyond a universalistic moralizing position” and escape the gaze of people like the foreman who treated Fantine as a sexual object long before she became a prostitute. (2) Further, it is only in her death that Fantine finds happiness as a specter, which not only haunts the patriarchal structures that brought about her demise but also provides her happiness, knowing that Cosette will be taken care of.

To clarify, being a sex worker is not intrinsically empowering any more than dying is a way to effectively realize that power. Rather, the deliberate choice to go unnoticed by surrounding power structures while operating from within is what’s empowering. Had Valjean become a factory owner openly without a secret identity there would be nothing transgressive about his act. Likewise, had Fantine turned to prostitution while simultaneously seeking to remain visible and use the money she earned to advance her social location, the system of patriarchy would not have been challenged. Instead by refusing to submit, even while participating, both were able to carve out a space to be free from their shackles even if they were surrounded by the threat of violence at every moment.  This is why at the end of the film, Fantine’s ghost tells Valjean “Come with me, where chains will never bind you.  All your grief…at last behind you.” Film, as a medium, echoes this same point and offers a similar moment of resistance for the viewer. Baudrillard's theory about how the media generates a world of simulations in a way that precludes response by the recipient is of some value here. But the masses have found a way of subverting it: the strategy of silence of passivity. (3) Here we discover that as the lights go down and we are told, as an audience, to be silent that this silence resonates with a revolutionary volume and haunts the capitalist logic filmmaking participates in.

It is important to note that shrinking from view or being silent is not the same as remaining complicit. In The End of Capitalism (As We Knew It): A Feminist Critique of Political Economy, JK Gibson-Graham argues that capitalism’s power comes from the relentless portrayal of its totalizing nature through the constant speaking out against its authority. “Rather than giving it a platform from which to speak its dominance…we [should] enshroud it in a productive silence” that, while remaining aware of its violence, doesn’t re-entrench the social power capitalism has been given.(4) Elina Pentinnen in Globalization, Prostitution and Sex Trafficking: Corporeal Politics further argues that such a maneuver demands a new approach to challenging capitalism that can be subversive without directly taking up arms: “The feminist criticism of globalization as a form of power and knowledge aims to deconstruct and reconstruct how globalization is produced as a form of discourse.…What feminists propose is to acknowledge the relational quality of world politics instead of its separation into states-markets, public-private and internal-external binary oppositions."(5) From such a feminist perspective there is no inside or outside of capitalism just like there is no escape for Valjean or Fantine. However, from this standpoint, there is space for resistance from within if one can navigate the cracks to go unseen just as Valjean does when he escapes with Cosette and slips past Javert at Paris’ North Gate to hide within the city walls. Thus, the refusal to be answerable is what’s truly transformative because it breaks down the bounds of expectation and alters the very discourse that circulates around systems of globalization and oppression.

This invisibility is what allows Valjean to emerge victorious at the end of the film precisely because of his refusal to revolt in the way Javert expects; whereas the revolutionaries within the film fail because they directly strike back against the French government in a way that is all too easy for the capitalist war machine to put down. This is not to say the revolutionaries’ struggle is without meaning. Put simply, Žižek claims that while “the first workers’ struggles…necessarily end in failure, their overall balance sheet is none the less positive because their main gain is educational.” No doubt, “we cannot ‘make the revolution at the right moment’ without the previous ‘premature,’ failed attempts…[because] it can succeed only as a repetition of a first failed attempt.”(6) The constant adaptations of Les Misérables from a novel, to the stage, and to the screen provide precisely that moment of repetition.  The silence we partake in at the theaters replicates these acts of revolution by refusing to allow others to represent our voices for us.  French philosopher Jean Baudrillard claims, “it isn’t a silence which does not speak, it is a silence which refuses to be spoken… [because] far from being a form of alienation, it is an absolute weapon” that eludes representation. The film ends with a series of questions: “Will you join in our crusade?  Who will be strong and stand with me? Somewhere beyond the barricade, is there a world you long to see?…It is the future that they bring when tomorrow comes!” Once the lights go up, the onus is on us to see that tomorrow realized and experience the world we long to see instead of having it spoken for us.

(4) Gibson-Graham, JK.  The End of Capitalism (As We Knew It): A Feminist Critique of Political Economy. Minneapolis, MN: University of Minnesota Press, 1996.

JL Schatz is a Professor of English and Feminist Evolutionary Studies at Binghamton University where he also serves as the Director of the Speech and Debate Team, which was ranked 1st in the nation in 2008. He has published essays on technology and apocalypse, environmental securitization, and the influence of science-fiction on reality.