This excerpt has been taken from Troy Blacklaws' novel Cruel Crazy Beautiful World. It chronicles the parallel lives of two African men, exposing the tensions that rumble at South Africa’s post-apartheid core. Jerusalem is a young poet and student whose stubborn father will no longer pay for his rambling studies. Half Jewish, half Muslim, Jerusalem is forced from Cape Town to a distant harbor village by his father, who believes a stint selling curios to tourists will right his wandering ways. Meanwhile, Jabulani loses his teaching job in Zimbabwe after mocking President Mugabe and must move south to start a new life, but his life across the border is tainted by the harsh truth that racism isn’t gone; it’s just taken another form. As the two men’s lives merge, their stories reveal the paradoxes of the South African experience.

Jabulani Freedom Moyo surfaces from the muddy Limpopo that runs from Botswana to Mozambique and forms the border between Zimbabwe and South Africa.

As he runs along a bald footway under a power line, he reflects on how he became a fugitive.

Not that long ago, he was still an English teacher at a high school in Bulawayo, in the Ndebele southlands. In the afternoons he coached cross-country, javelin, long jump and football. Though he cursed all the marking of papers, he loved the upbeat dialogue with his students.

One day, over tea in the staffroom, he’d remarked to his colleagues that Mugabe looked like a joker in his vivid, Java-print shirts – West African style. They had laughed. They felt no love for that Shona man who had commandeered their country. But one rat had felt it his duty to report him to the headmaster.

The headmaster (a Shona posted to Bulawayo by Mugabe) had made Jabulani stand up in front of all the schoolchildren in the school hall when he read out the crime (mocking Mugabe) and the verdict from Harare: Mister Moyo was fired. The headmaster had reminded his school that Mugabe was taught by Jesuits and had studied overseas and was therefore no joker. He’d said Mister Moyo was lucky not to be jailed.

Students and teachers had dared to hiss at the injustice of a teacher being shot down over a jibe. It was not as if Mister Moyo had tossed darts at the image of Mugabe, or had not stood still as Mugabe went by in his Benz convoy. If schoolboys in Bulawayo had learnt one thing, it’s this: In Zimbabwe the law is just a panga blade to cut down Mugabe’s foes.

The irony is that Mugabe had once been Jabulani’s hero in the chimurenga, the long fight for freedom. Jabulani had spent his boyhood bowing to the White Man in Rhodesia. He was halfway through high school when Mugabe had outfooted that old white Smith. Rhodesia was now Zimbabwe and Salisbury now Harare. And it was in this free Zimbabwe that Jabulani Freedom Moyo had become a human being who held his head up high.

But then the rumours had begun to bleed out. Of killings in the Ndebele south. Of corpses dumped down an old mineshaft. Of the raping of girls. Of white farmers run off farms that Mugabe then doled out to his mates. Of starving, uprooted farmhands camping in roadside gullies. And, in the end, the jambanja, the chaos of being tossed out, went beyond the farms and you saw the fugitives on the pavements in town holding quavering chickens and skinny goats and peanuts in Castrol cans.

Teachers had looked up from their newspaper or coffee when Jabulani had gone into the staffroom to empty his pigeonhole. Someone (the rat?) had posted a dry, flat frog in it. Teachers had defied the scowls of the Shona headmaster and stood and tapped their teaspoons against their teacups in a staccato tattoo of camaraderie. For Jabulani they risked their feet being beaten and their heads being submarined by a gang of Mugabe’s goons.

A student of his had come to his classroom to tell him that he’d learnt a myriad things in his class and that he now wanted to become a writer. He’d learnt how to tune in to the music of words. The boy had hidden his tears behind a hand and Jabulani had hugged him and put a Hemingway in his other hand. A book about a jinxed old fisherman was a curious gift to a boy who might never see the sea.

As Jabulani put his books and pens into a cardboard box, he had thought Zimbabwe’s hard-earned freedom was just like that giant marlin the old man took so long to reel in. And now it was being ravaged by sharks. But in this case the fisherman did not fend off the sharks that zeroed in on his catch. He too was hacking the fish down to its bare bones. That was what was so warped.

On the way out of school the headmaster had waylaid him and rifled through the box in Jabulani’s hands to see for himself whether Jabulani was not perhaps pinching a hole-punch or an Oxford dictionary. If Jabulani ran his country’s ruler down there was no telling how low he would go, was the headmaster’s parting shot.

Jabulani had taught at the school for fourteen years.

From then on he was a marked man and no school would hire him.

Hearing his old Datsun blow up one night, he’d run out into the strung-up corpse of the family’s cat.

They had painted VIVA MUGABE on the walls in cat blood.

Then he’d landed a job in a bicycle shop called Cheap John’s Cycle Repair. But they had burnt it down and Cheap John had blamed Jabulani for his misfortune. In a town where a synagogue had burnt out less than a year before, the police hardly noted the end of a bicycle shop. That was in June. 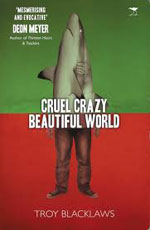 And for half a year now there’d been no meat to go with the half loaf of bread he’d stood in line for each afternoon. For half a year they had survived off the pittance his wife, Thokozile, earned as a nurse. For half a year his son and daughter had stared at him, wondering when he’d pull a rabbit out of the hat to recall the magic of the past.

Back then he’d come home high on football fever and down a beer on the front step while the cat licked his salty shins. He’d clap his hands as his son Panganai played guitar or beatboxed and his daughter Tendai hula-hooped or cartwheeled. In his pockets he’d have a guitar pick for Panganai and a hairpin for Tendai. And, after another quart or two of beer, he’d flirt with Thokozile, flipping up her skirt to pinch her ass.

Then he’d lost his post and all the fat and fun of his world had been pared away.

– You have to run away from that gandanga Mugabe, that murderer, Thokozile had said while rats fidgeted in the roof overhead.

The rats had got out of hand since the cat died.

– He will hunt you, that fucking gandanga. And he will kill you. Just as he will kill anyone, Shona or not, who is his foe.

– You have to, otherwise we hunger to the bone. Now, before Christmas, is a good time to go to South Africa. All tourists from overseas go to Cape Town for Christmas holidays and they have money in their pockets. You will find a job and send us money.

– Where will I stay?

– Other men find a way. You may be so lucky and find a job in a bar where they put a roof over your head.

Though she’d cajoled him in this way, she’d never blamed him for the way things had panned out. She’d never reminded him that a dumb, flippant joke of his had cursed them. Though he no longer flirted so cockily, she’d still lured him to her in the dark, telling him he’d always be her man. And after their loving he’d blow cool wind from his lips along the scalp-skin furrows between her cornrows.

Yet he was dead scared of heading south.

He’d heard of the crocodiles and the undertow in the Limpopo.

He’d heard of border soldiers on the far bank of the Limpopo who’d shoot you and hide your corpse rather than deal with the paperwork to deport you.

He’d heard of the gumagumas: roving, raping swindlers who lurk in the bundu and hoodwink your money out of you.

He’d heard of vigilante South African farmers who ride pickups through the borderlands and shoot at stray Zimbabweans. The farmers blame them for the looting and random murders. In the old days the border had been guarded by drafted white-boy soldiers. Now there is no draft in South Africa and the borders are riddled with holes.

He’s heard from the deported that in a border town called Musina a police captain has photos of dead refugees on file. This girl called Jendaya was raped and stabbed by the gumagumas. They found her with her panties on her head. This boy called Goodwill was robbed and stabbed by the gumagumas. In his pocket was a paper in the hand of his schoolteacher, pleading for pills to cure his mother of the blood in her spit.

He had no money for the malaishas, the human smugglers (half upfront, half on arrival). He had no friend in Cape Town to shack up with till he found his feet.

If he survived crocodiles and soldiers, gumagumas and vigilantes, and somehow got a ride to Cape Town, then he’d need to beg for asylum papers from Home Affairs. And until he had papers he’d have to dodge the Nigerians in this place and the Tanzanians in that place, the Gambians here and the Kenyans there. He’d have to skirt the townships where black South Africans blamed dirty Zimbabweans for pinching their jobs and their girls and for dabbling in witchcraft.

Yet he’s lucky he’s a man, for they may just give him asylum. They give no papers to boys and girls, so they have to survive in limbo. The boys camp under bridges, in roadside culverts and on outskirt dumps of junk and dirt. You see them (if you have eyes to look) in their ratty shorts and tacky flip-flops scavenging in bins, plucking at guitars conjured from paraffin tins, playing football with a dirty tennis ball, dodging motorcars to beg as the robots go from orange to red. Ether from a bottle of glue may send them on blurred, spinning trips. The girls you never see. They morph into maids, wives and whores. Never mermaids.

An aeroplane hums overhead. Jabulani detours from the path to shinny up an acacia tree.

His heart still beats hard long after the humming of the plane fades out.

Once dark falls he will head further south through this foreign veld pervaded by cackling calls, distant shots and jaggy-tooth things.

Troy Blacklaws is a South African writer whose work uses the lens of his own boyhood to illuminate the reality of living under apartheid. After moving from Natal, South Africa, to the Cape with his family at the age of nine, Blacklaws learned the truth behind the divisions in his country, first as a student at Paarl Boys’ High, and then as a draftee for the army, where he spent two bitter years as an objector. Shortlisted for the Prix Femina for "Karoo Boy," Blacklaws is a graduate of Rhodes University and has taught at international schools in Frankfurt, Vienna, and Singapore. He now lives and teaches in Luxembourg.