On this morning cracked with disappointments when blue has left the sea to invade the hill in a uniformed chain tightening on the diminishing crowds. Midnight aborts the day leaving the Casbah to its rubbish and fragments. I appeal to the memory of Algiers from its seaside bars to the tanks of the occupation, I appeal to Hassiba to Djamila to Didouche and to Boudiaf to the ancestors and to the amnesiacs to the rapists of dreams and to the perpetual traitors I appeal to every drop spilled to every humiliation let the bay gush forth at last and let it inhabit us let it open our senseless eyelids let Al Anka and the besieged diwans awaken let the doorways of our houses open and let a new song arise. Let the TGV Express awaken, let it bring back the breeze from Tangier and let it start a new route from Tunis to Alexandria and from Beirut to Istanbul. Let a new day open and let Midnight be fragrant with jasmine
- Samira Negrouche, Histoires minuscules des révolutions arabes, éditions chèvre1

Samira Negrouche, doctor, poet, writer, and translator, is a young woman from Algiers who grew up during the country’s terrible decade of violence between the military and Islamist militants in the 1990s. During those violent years, literature was her refuge. Today she is considered one of the most talented poetic voices coming from the region. Negrouche writes in French, which is a complicated matter in a country where language is also an affair of politics.

As a child, Negrouche spent many hours in her grandfather’s bookshop. Her grandparents were from the same Berber village as singer, composer, and political activist Matoub Lounès, who was assassinated in 1998. Both illiterate, they moved to Algiers when Negrouche’s mother was nine, and put her in school—an unusual choice for a girl in those days. (Negrouche’s mother went on to become a schoolteacher). In 1961 her grandfather bought a bookshop. On the ground floor, it was a stationary shop and kiosk, and one level below were the books.

“He was in his bookshop at 5 am,” said Negrouche. “He had a real feel for it. He had books in all languages. He had comics, literature, scientific journals, and academic books. He was friendly with students who came in. Books, for my grandparents, were sacred. In retrospect, I realize that this was passed on to me. My grandparents gave me my foundation." 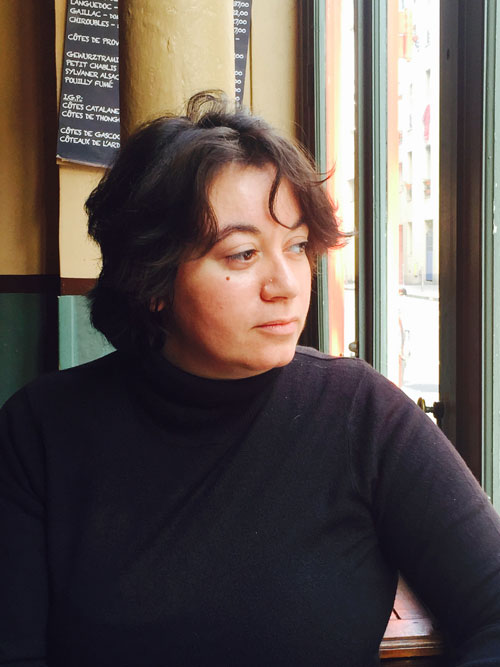 But Negrouche also loved math and science, and said that the context in Algeria at the time made her want to study medicine. When she was already an intern, one of her closest friends, the poet Djamel Amrani, died. Amrani had been tortured as a teenager by the French colonial occupying forces in the 1950s; he nevertheless continued to write in French and warned Negrouche that for her generation, writing in French would be even more difficult. His death triggered something within, and although Negrouche said she was passionate about medicine, she was even more passionate about poetry. Medicine gave way to words and Negrouche is now published in Algeria, Europe, and Argentina.

It has been over fifty years since Algeria gained its independence but language remains a thorny subject. For 132 years the French language was imposed on Algerians. At the time of decolonization, the Algerian government promoted a policy of “Arabization” and sought to establish standard literary Arabic at all levels.

But, said Negrouche, “In contrast to Tunisia and Morocco, where French was the language of the bourgeois, in Algeria it had penetrated all levels of society very deeply. It was also the language that enabled people to get ahead, to have access to higher education.”

She describes the situation today as “institutionalized schizophrenia” and recounts absurd situations in which administrative documents must often be translated into Arabic because an official has written them in French. But when the document, now in Arabic, arrives on the desk of other bureaucrats, it must be translated back into French because the majority of the people reading it are Francophone.

When Negrouche is criticized for writing in French, she said, “People are using this argument for other reasons. They know people read and speak French.” Language is somewhat of a non-issue for Negrouche; she feels there are far more pressing subjects in Algeria:

“I live in a country where great injustice surrounds you at each street corner. People are trying to get by at all costs—you could almost say that the worst indignity is what they have to endure at home—they are able to accept the unacceptable elsewhere in the hope that a hypothetical future will be more dignified.”

For the past ten years, besides writing her poetry, she has organized cultural events, bringing together poets, artists, and musicians, focusing on collective work as well as translating poetry from Arabic and English into French. She recently decided to stop most activities and focus on her writing, even if she has also put aside a book she has been working on for ten years.

“You can’t be everywhere. I wanted to say everything in this book, I felt like I was writing for 30 million people. There is huge pressure on Algerian writers—there are so few places where you can express yourself that people want you to say everything for them. They want you to speak about this or that political issue. About violence between men and women, violence against gays—there are too many subjects, you cannot say everything, you have to find your language within all this…I don’t have 15 lives; I have this one. In this one I want to be the best writer I can be. Living in a country like Algeria is not something neutral. It demands a lot of energy. I try to be inside my city, living what people live. I try to digest everything and not write political manifestos but poetry and literature and to do this you need to keep a certain distance.”

What is so pleasurable about Negrouche’s sensuous writing is that it reaches across borders and time—there is a profound classical knowledge of the language yet it is fresh and contemporary, it describes complexity in deceptively simple terms.

Rhythm is important to Negrouche and she says that when she is writing, she always has music on her mind. “There is a scientific part of me that overthinks. I fight with this. So I have two components to my work. I need a lot of time to digest things because I don’t want to write intellectual poetry.”

She wants to be a happy poet, she says; she is tired of tragedy. “It’s as if we had stopped in the middle of taking a breath. We have been in this situation for years. We are waiting for something. We are disappointed, we are exhausted, we keep getting up but then…we could have been California."

“Algeria is a giant with clay feet,” said Negrouche, referring to an expression that was used when she was studying obstetrics. Babies born to mothers with gestational diabetes are often larger than most babies but present certain weaknesses as well—they were called giants with feet of clay. The expression probably originates from the Bible's Book of Daniel, in which King Nebuchadnezzar dreams that he sees a statue made of gold, silver, and brass, but with feet of clay. The vision was interpreted to mean that the clay was a symbol of the Babylonian Empire's vulnerability and imminent collapse. “We need to accept these feet of clay,” said Negrouche.

Reviews by Sneha Khaund
The Personal is Political in Assam's Insurgency
Poetry by Mona Kareem
The Final Hours of a Statue
Opinion by Andrew Ryder
Two Decades of Struggle Against Racist Police Violence
Conversations by Nathan Suhr-Sytsma
What binds us, in this boat: Poet ‘Gbenga Adeoba on migration
Poetry by Ngũgĩ wa Thiong’o
Dawn of Darkness
column by Esther A. Armah
How To Talk About Racism in Britain
Literature by Robtel Neajai Pailey
This Is Our Country
Reviews by Kerry Carnahan
Nathalie Handal: A No-State Solution in Poetry
Reviews by Nirupa Umapathy
The War on Terror Goes on Trial
column by Esther A. Armah
the STAYED and the STOLEN: Emotional Economy and the 1619 Project
Like any of the articles? Support our work.
Donate Now