During a recent drive along the Lebanese border with Israel, I posted a photograph to Facebook taken from the south Lebanese town of Adaisseh. Facebook immediately asked if I wanted to specify the location as “Misgav Am, Hazafon, Israel.”

In addition to spawning a temporary panic attack, as generally happens when I am confronted with the inescapability of Big Brother, Facebook also piqued my curiosity. Once I had retrieved my laptop from where I had flung it in fright, I Googled the name and found that the top two suggested searches were “Misgav Am kibbutz” and “Misgav Am terrorist attack.” I went with the latter. 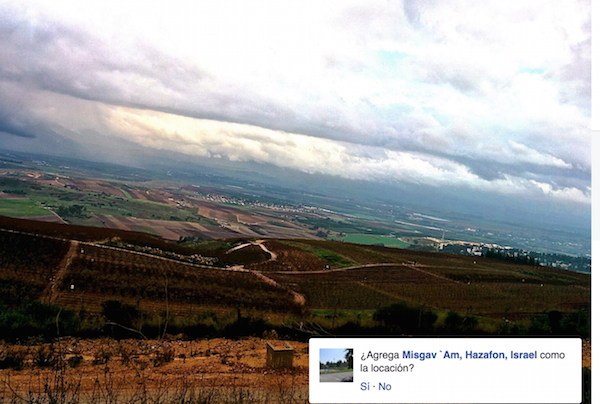 According to a dispatch from the Jewish Telegraphic Agency (JTA) dated 9 April 1980, three Israelis had been killed the previous day during an assault on the kibbutz nursery by five Palestinian commandos from Lebanon, who were themselves all subsequently killed. The Israeli victims included a soldier and a two-and-a-half-year-old child.

Then-Israeli Prime Minister Menachem Begin’s views on the matter were quoted as follows: “Evil men who are bent on the destruction of Israel carried out this barbaric crime.” Incidentally, the article notes, Begin’s assessment was issued “as he received the Stephen Wise Award from an American Jewish Congress leadership mission visiting Jerusalem.”

Begin and other top Israeli officials attended the funeral in Misgav Am for the child and one of the other victims. According to the JTA, the words of poet Chaim Nachman Bialik were invoked at the service—and translated less-than-poetically by the news agency as: “Even Satan has not yet invented revenge for a little child’s blood.”

But if Satan hadn’t gotten around to it yet, others surely had. Since the foundation of the state of Israel more than three decades earlier, the Israelis had carved out a name for themselves in the massacre business—dispensing with children and older humans alike—under the pretense of responding to Arab aggression.

It bears mentioning that, a mere two years prior to the commando attack on Misgav Am, Israel had conducted a rather barbaric invasion of Lebanon. As Noam Chomsky has written, this particular operation “killed several thousand Lebanese and Palestinians, drove hundreds of thousands to the north, and left a region of the south under the control of a murderous proxy force, Major [Saad] Haddad’s militia.”

Among the various atrocities perpetrated by the militia—which Chomsky specifies were reported in Israel but not in the U.S.—was “the massacre of all remaining inhabitants of the Lebanese town of Khiam during Israel’s 1978 invasion.” Israeli bombing in earlier years, Chomsky explains, had already reduced the population “from 30,000 to 32.”

Israel’s subsequent invasion of Lebanon in 1982 took barbarism to the next level, with some 20,000 people killed, the vast majority of them civilians. Neither of these episodes, however, was met with the same level of “heartfelt condolences” from the United States that were reportedly promptly conveyed to Prime Minister Begin on the occasion of the Misgav Am attack. The JTA article quotes U.S. President Jimmy Carter as declaring himself “shocked and deeply saddened by the tragedy.”

In more recent years the former president has refashioned himself as an increasingly ardent critic of Israel’s excesses; his previous persona, however, certainly did little to discourage the Israeli monopoly on victimhood or the state’s self-supposed superior humanity.

And official US support for Israel has only gotten stronger. In 2006, when Israel took it upon itself to rain death and destruction upon Adaisseh and much of the rest of Lebanon—ultimately producing approximately 1,200 fatalities, most of them civilians—the U.S. helpfully sped up bomb deliveries. And though Israel strove, in typical fashion, to portray the affair as a case of righteous and just retaliation against provocation by its enemies, the fact of the matter is that the “retaliatory” alibi just doesn’t apply to situations of institutionalized ethnic cleansing. If you set up shop on other people’s land and start killing them, you’re pretty much stuck in the role of aggressor.

Of course, there are plenty of perks that come along with aggression-disguised-as-victimhood—especially if you can turn your shop into a laboratory for repressive techniques destined for a lucrative global market. In the case of Israel, the in-house lab produces expertise and equipment for occupying, besieging, and bombing groups of people, as well as slightly less overtly nefarious merchandise. A 2012 New York Times blog post on Facebook’s acquisition of an Israeli facial recognition company called face.com noted that the company’s “technology is designed not only to identify individuals but also their gender and age.”

Following last November’s terror attacks in Paris, meanwhile, the Times of Israel boasted that Israeli-developed technology had done “its bit to help reassure the panicked citizens of Paris that their loved ones were safe.” This was a reference to Facebook Safety Check, the service offered to Facebook users in the vicinity of the attacks in the French capital—but that had been conspicuously denied the previous day to Facebook users in the vicinity of terror attacks in the Lebanese capital of Beirut.

Then again, safety has never really been an option in Lebanon. Its technological southern neighbor has helped see to that.