What if violent clan warfare revolved not around religion or land, but extreme attitudes about food? In master chef and celebrated foodie author Anthony Bourdain’s first foray into the graphic novel genre, Get Jiro! (Vertigo), near-future Los Angeles is a dystopian culinary landscape dominated by warring clans of chefs – the Internationalists, who blend foods from all over the world into exotic dishes, and the Vertical Farm of militant macrobiotics who prepare nothing but organic, vegetarian dishes.

Into this tinderbox of arrogance and intolerance walks Jiro, an old-school Japanese sushi chef who just wants to do his thing without anyone dishonoring his delicious food.

“Having been a chef for some many years, I understand what it’s like to work really, really hard to get good at something, only to have someone piss all over it,” Bourdain told comic writer Alex Zalben. “In my heart of hearts, lopping somebody’s head off, for taking your first piece of nigiri and letting it soak in this slurry of wasabi and soy…? That’s not an unreasonable reaction. I mean, in the little dark voice in my head? I can kind of understand that.”

Jiro is particularly uncompromising in that way, living by the (exquisitely sharpened) blade and showing no quarter to artless belligerents, and his knife skills are ascendant: “He works his way around the bone, rather than through. (Beat) As one does,” said Bourdain, who's loved to “geek out” on comic books from childhood. He lets his love for spaghetti westerns and samurai flicks run wild in this bloody, beautifully drawn “Bento Box” art book.

The intersection of cuisine, culture and conflict is one Bourdain witnessed quite literally during the filming of an episode of his television show, “No Reservations,” in Beirut in 2006. “We went to Lebanon looking to make a happy food and travel show about a resurgent country,” as he put it. Instead, he watched Israeli fighter jets bomb the Beirut airport from the balcony of his hotel room while Hezbollah fighters fired automatic weapons in the air celebrating the kidnapping of Israeli soldiers.

In that light, Get Jiro!’s acid satire of militant foodies enforcing their convictions “by the sword” reminds us, amid the explosion of foodie culture in the United States in particular, that we may just be taking the supremacy of food a bit too much to heart.

Written in collaboration with Joel Rose, drawn by Langdon Foss and colored José Villarrubia, Get Jiro! is far and away Bourdain’s laser-sharp social commentary at its bloodiest, with hyper-attention to food detail. It's just out in paperback. Here’s a taste… 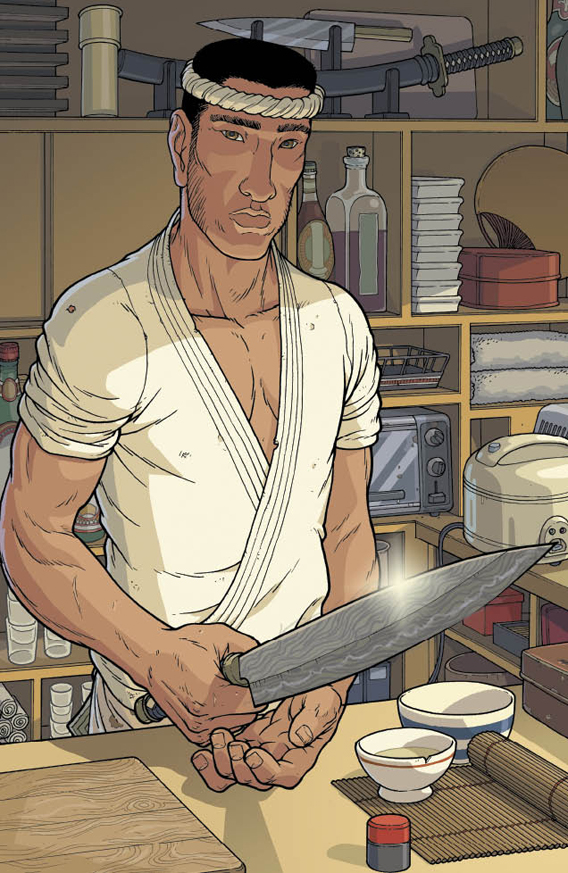 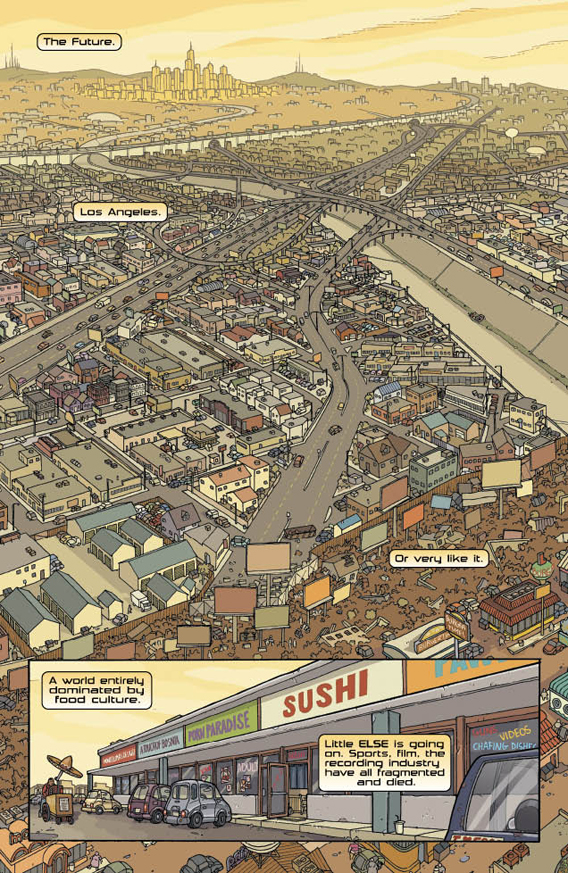 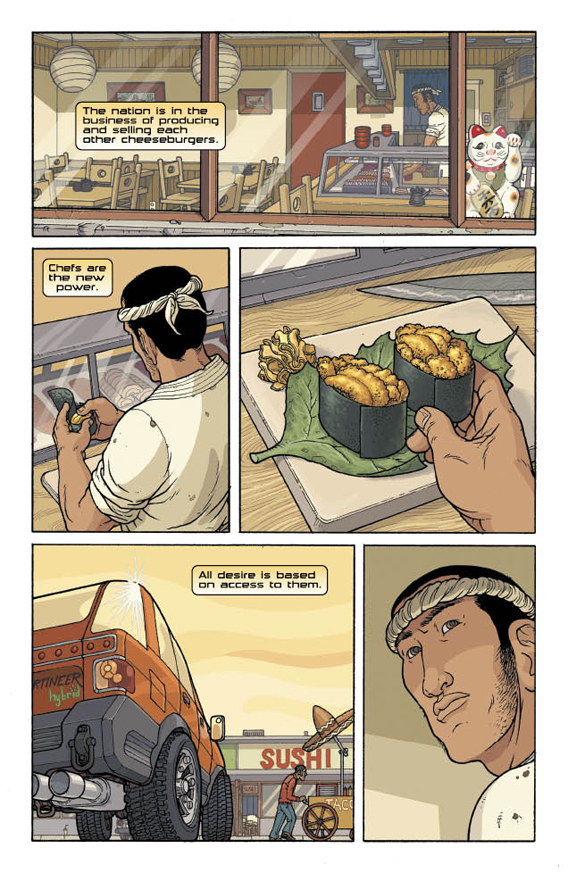 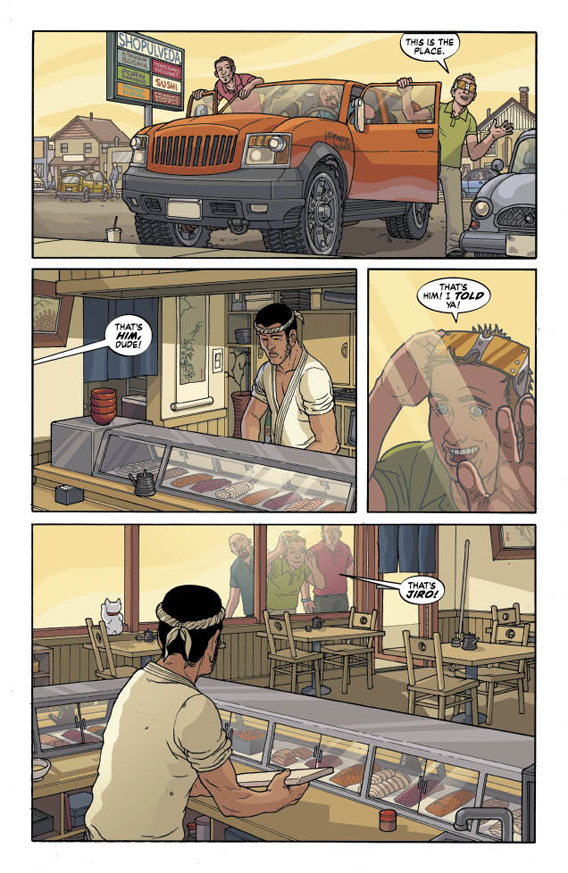 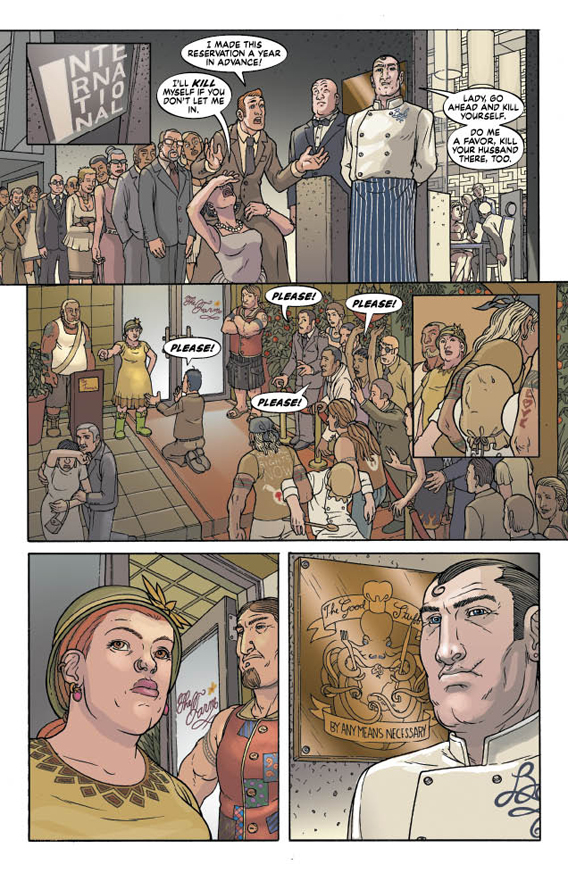 Excerpted with the permission of Vertigo Comics.

Literature by David L. Lukudu
Ahmed Suk Suk
Opinion by Michael Busch
What's In Store for Betsy DeVos
Opinion by Ikram Ullah
A Century in Defiance
Conversations by Michael Busch
"Next Time They'll Come to Count the Dead": A Conversation with Nick Turse
blog by Melissa Rodriguez
UN report: Syrian government is exterminating its own people
blog by Deepali Srivastava
The Panama Papers aren't about Panama
Opinion by Shiyam Galyon
Besieged, Twice-over: Activists Push for Food Drops In Deir Ezzor
blog by Fabio Andrés Díaz
One Country, Two Peace Processes
Reviews by Greg Shupak
Cuba in the World
Reviews by Max Ajl
Militarized Neoliberalism: Jeff Halper's "War Against the People"
Like any of the articles? Support our work.
Donate Now