How appropriate that in Colombia, "crushing tax reform" is spoken of as “reforma tributaria” (tributary reform). I am hard pressed to find a more accurate term which hints at a dystopian world in which tribute is paid to aloof ladies and lords whose pomp and gaffs elicit disdain and giggles from the public.  And prior to armored trucks lighting up the night sky, to legion of armed police firing live rounds at fleeing citizens, the patricians had given reasons to laugh.

On a televised interview about a year ago, while speaking of the toll Covid lockdowns have had on small businesses (and assuring that a tax reform was not cause for concern since it was a year away), President Ivan Duque figured that a bakery employee “made, let’s say, on average…two million pesos” - well over double the minimum wage. In reality, bakery employees make “let’s say, on average…” the minimum wage. Social media was unforgiving and the guffaws resounding.

About a year later, and almost two weeks prior to the tax reform protests, the Minister of Finance and Public Credit and author of the tax reform, Alberto Carrasquilla, followed in the Presidents footsteps: When asked on a broadcast interview how much a dozen eggs cost, he supposed about 1,800 pesos - nearly 1/3 of their current cost. Again, social media did not miss a beat; Carrasquilla was lambasted for days. But during pandemic lockdowns and on the eve of an overwhelming tax hike, the idea that the rulers of the land estimated median salaries as over twice as high and necessities three times cheaper was too much to bear, and certainly too much to stay laughing.

The reform tax, formally called the “Sustainable Solidarity Law,” was a continuation of the economic reform Colombia has had over the last decade. The long reform has followed the pattern of all restructuring plans prescribed by organizations such as the International Monetary Fund and World Bank, including privatization of state-owned companies, financial liberalization, trade liberalization, and public spending cuts. More pressingly, the “Sustainable Solidarity Law” attempted to boost foreign investment as investor confidence floundered with the Covid pandemic and Colombia’s inept response. Seemingly, “solidarity” means solidarity with big business. In 2020, according to Salomón Kalmanovitz, the financial sector paid only 1.9 percent of its 32-Billion-dollar profit in taxes. Meanwhile, the Colombian working class is being told (never asked) to pay a 19 percent tax on indispensable utilities, such as gas, electricity and sewage and basic necessities, such as water, meat, fish, cheese, rice, medicine, and of course, eggs. This is on top of income tax. (Income tax starts at 19 percent for salaries over 1,400,000 pesos monthly—barley a livable wage; an average dwelling rents at about $1,000,000 pesos in Bogotá.) This act of solidarity would leave most Colombians at bare life, with just enough sustenance to continue working.

So, on April 28, 2021, the people marched. Arranged as a National Strike, the marches were a continuation of the 2019/2020 protests, which were frozen by Covid and Colombia’s severe rolling lockdowns. After a 13-month hiatus, the people did not miss a beat. But this time around, it was different. Now, the marches were coordinated, not just in the largest cities, but in most urban areas. By midday, in Cali, a group of indigenous Misak toppled a statue of Sebastian de Belalcazar, a conquistador; and by nightfall, Cali erupted. But Cali wasn’t alone. Major cities throughout the country began to see the destruction of public property. Most significantly, CAIs (small/satellite police stations) were burned. In Bogotá, traditional communications companies like RCN (TV) and Semena (magazine) were attacked. Protestors were met with Riot police and disparate force. 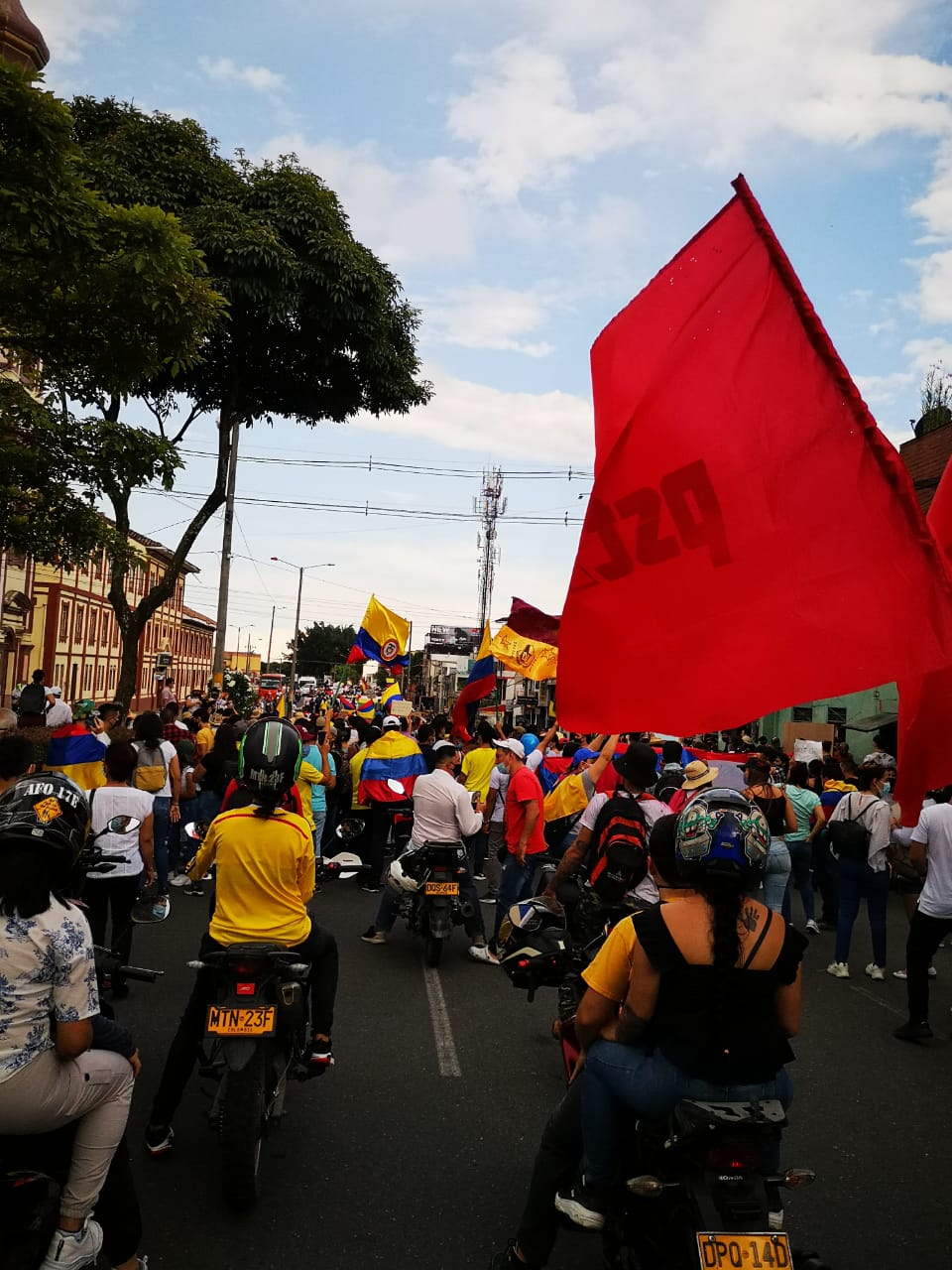 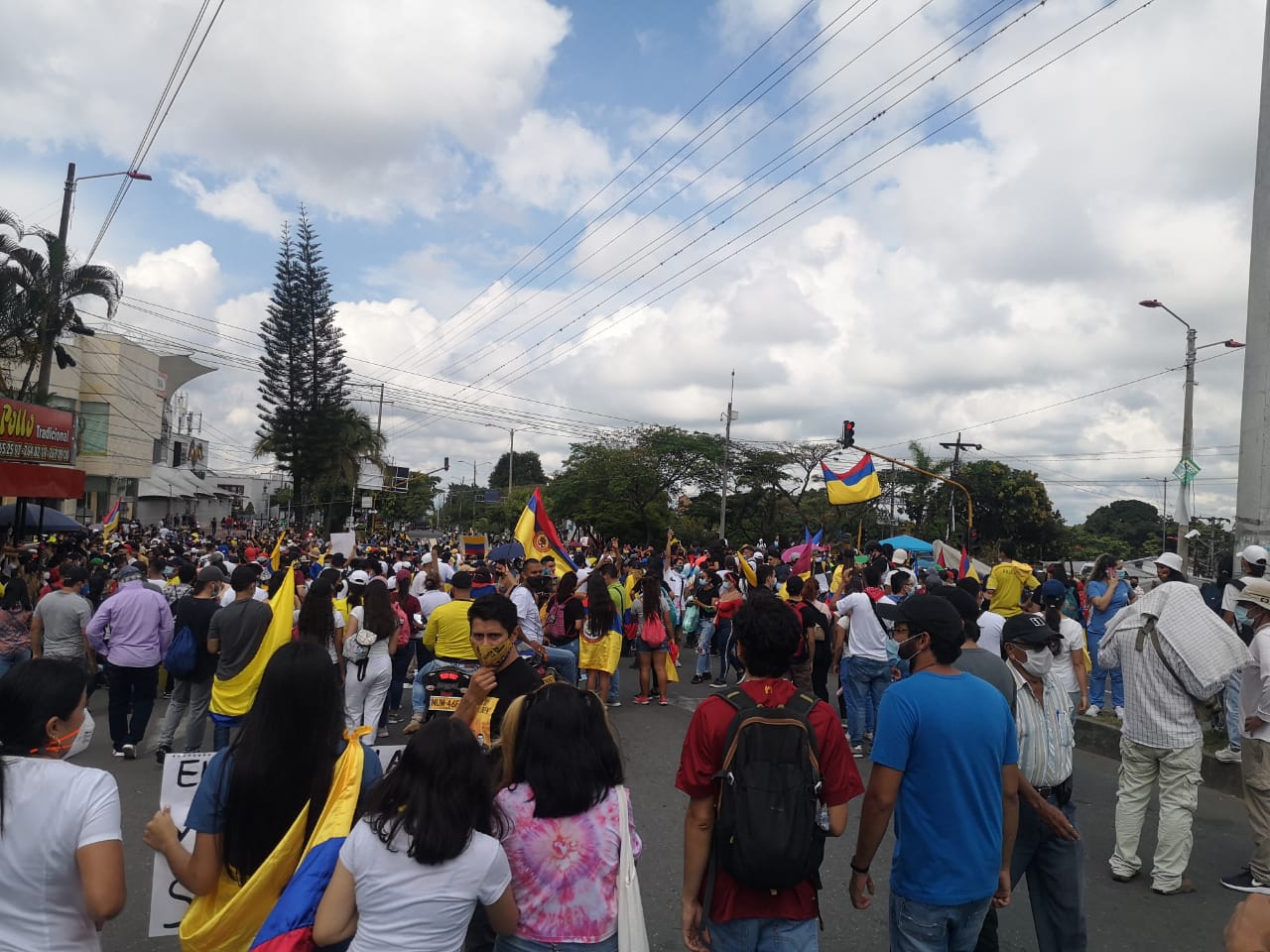 By the next day, Michel David Reyes Pérez, Juan Diego Perdomo Monroy, Cristian Moncayo, Stiven Sevillano Perea, Charlie Parra Banguera, and minor Marcelo Agredo Inchima were dead - beaten or shot by police. The protests continued the 29th, and the previous day’s violence escalated. Hundreds of thousands of Colombians took the streets, again with no pretension of peace, and met Police forces. The violence raged, and the videos of appalling police brutality populated the internet.

“Why? We weren’t doing anything. Who destroys stores here? Everybody knows everybody,” demanded a resident.

This happened across all the towns of the Bogotá Savannah.

After two full days of unrest, on April 30th, President Ivan Duque publicly announced that, due to its unpopularity, the “Sustainable Solidarity Law” would be retracted.

But the retraction of the “Sustainable Solidarity Law” demonstrates two salient flaws of liberal politics. First is the problem of negotiation. After declaring the retraction of the tax reform due to its evident unpopularity, Duque announced, later that day, that the tax reform would be renegotiated. After all, he argued, its purpose was to fund social welfare programs. (During these negotiations, the status quo that continues to suffocate Colombia’s working class stays in place, and while the tax reform is renegotiated, congress is preparing a health reform bill to further privatize healthcare.) Of course, this highlights the catch of negotiation: Who gets to negotiate? As anthropologist Talal Asad notes, one of the biggest features of freedom of speech in a liberal democracy is the freedom to be heard. In this renegotiation, the Duque administration did not engage the political opposition - those public representatives which have been the institutional dimension of the outrage and pushback. Rather, the administration has convened with members of its own political party, the Democratic Center, and its likes (The Liberal Party, Conservative Party, Radical Change Party). Again, they failed to listen. Sincere negotiation and debate are neither a standard nor an obstacle in liberal democracies.

Furthermore, the inevitable interruptions of liberal legislation reveal what philosopher Giorgio Agamben intimates in much of his work - that liberal governance, its structure, its debate, its rhetoric, hide what is at the heart of all politics: Sovereignty. If public exchange - which boiled down to public demonstrations, protests, riots, and their consequent suppression vis-à-vis police and ESMAD (Mobile Anti-disturbance Squadron) - moved the needle of politics at all, it was in the defining of terms and grammar for said exchange. Unmistakably, the argument is sovereignty, and the language is violence.

With this language, the Colombian people not only made a statement, they made a proclamation. The mastery of language, according to decolonial pioneer, Franz Fanon, “affords remarkable power”; and the Colombian people have demonstrated enough power to have the Colombian state brazenly declare open war on them. Before announcing the retraction of the reform, Alvaro Uribe Velez (oligarch, ex-president, ex-senator, paramilitary boss, Medellin Cartel associate, Harvard and Oxford alum, King-maker, and close US ally) tweeted: “Let’s support the right of soldiers and police to use their firearms to defend their integrity and to defend people and property from criminal acts of terrorist vandalism”. His tweet caused public outcry; the next day President Duque ordered the militarization of police in cities (again, the tax reform had been retracted). Since May 1st, the Colombian police forces and military have used live rounds on protestors. So far, scores have been killed, dozens have disappeared, and hundreds have been injured.

The protests, and the authorized militarization of police, have also demonstrated that the televised protests on wide open avenues (as seen in many “developed” countries) are political theater. Prolonged confrontation with police, or even militarized police, is pure stagecraft. The tear-gas, the camera crews, the chanting, the burning trash cans and scuffles with rabid police resulting in busted heads are a carnival for the frustrated; they are a saturnalia, wherein for a moment the world is turned upside-down and the powerless have the power of speech and the strength of their hand - wherein they have the strength and right to force the powers at be to react to their explosive sovereign will; an inversion where the rich are holed up in their lonely towers and the world watches the pauper's fury as the state begs its people for peaceful protest.

The truth is that, despite a few broken police lines and a couple of armored trucks on the wrong end of a Molotov cocktail, the patricians sit easily enough to laugh back at the desperate street mobs who scatter like moths. When water-canons fail, a fireworks display of flash-bangs and gas canisters turn night into day and disband the daring. Where that fails, helicopters take the skies and unleash live rounds and more gas canisters. In the blink of an eye, riot control becomes urban warfare. The routed in Colombia have been given chase into their residential neighborhoods, and given no respite. In Cali, private homes have been set on fire. Armies of police flood the narrow streets and unload live rounds on anyone deemed belligerent, including those belligerent enough to run away. Military helicopters release munitions on residencies and clears alleys. In Bogotá, death squads openly and systematically prowl the night, rounding up suspects.

The promise here is that, just as the latest tax reform was the straw that broke the Camel’s back, from the state’s perspective, these demonstrations are, too. Public demonstrations will never amount to anything if there is no disruption to the means of oppression: the unfettered flow of capital (absurdly, in a Capitalist structure, the means are the same as the ends). This is well known to Latin American activists. For decades, the Colombian government has met forceful resistance to its neoliberal schema. Indigenous and Afro-Colombian communities have been at the forefront of interrupting profitable mining throughout the country. Small shows force, public solidarity, sabotage, and grass-root activism have been the norm in rural Colombia, and although these are easily met with public intimidation, serial assassination, disappearances and massacres, the peasant resistance has slowed down accumulation by dispossession. Similarly, the protests in Colombia are trending. As a continuation of the 2019 Paro Nacional (National Strike), these manifestations have for second time halted, if only momentarily, a secondary form of accumulation: the taxation on the working class. In addition to frustrating neoliberal tax reforms, protestors have also taken the practice of blocking several roads across the countries impeding the movement of raw materials and goods. The stricture of these streams, as slow as they are, may make the Colombian state think the unthinkable: taxing multinational corporations.

Until then, it seems that, behind the façade of liberal politics and its theater, Plata o Plomo (silver or lead) is the law of the land. The term used in Colombia to describe Pablo Escobar's policies in the 80’s and early 90’ perfectly describes the legitimate rule of law. Whereas Escobar's threat was one in which one receives either money or bullets (an enforced bribe), the Colombian state - and any state pushed enough - functions on similar terms: You pay the money, or you get the bullets.

Amidst the bullets, another group of indigenous Misak strutted to another statue—that  of Gonzalo Jiménez de Quesada, the “founder” of Bogotá—and toppled it.

Steven Herran is a Ph.D. candidate at The City University of New York, where he researches Coloniality, Religion, and Literature. He is from Queens, NY and currently lectures at Lehman College in the Bronx.

Reportage by Steven Herran
Social Media State: Crushing Colombia's "Cacerolazo"
Poetry by Mona Kareem
The Final Hours of a Statue
videos by Richard Raber
Father Rogelio Cruz Will Keep Fighting
blog by Inshah Malik
Dispatch from Tehran
Reportage by Nicole Rothwell
Women Lead Colombia to Peace after Five Decades of War
blog by Christiane Wilke
Thinking Justice Beyond Impunity: HRW and Colombia
Opinion by Fabio Andrés Díaz
On the Brink of Peace
Opinion by Fabio Andres Diaz
Uncertainty, Peace Agreements, and Public Participation in Colombia
Opinion by Paola Chaves
Peace, Infrastructure and Politics in Colombia
blog by Deniz Ay
Insurgent citizenship on the 3rd anniversary of the Gezi Park protests
Like any of the articles? Support our work.
Donate Now