On May 26 and 27th Egypt will hold presidential elections. While Egyptians are going to the voting booths, Lebanese dancer and choreographer Alexandre Paulikevitch will be dancing in a workshop focused on baladi, a traditional folk-style Egyptian dance.

It is a telling symbol of who Paulikevitch is - a deeply political person who expresses his commitment to democracy and personal freedom through his art which, in his case, is an oriental dance normally performed by women. 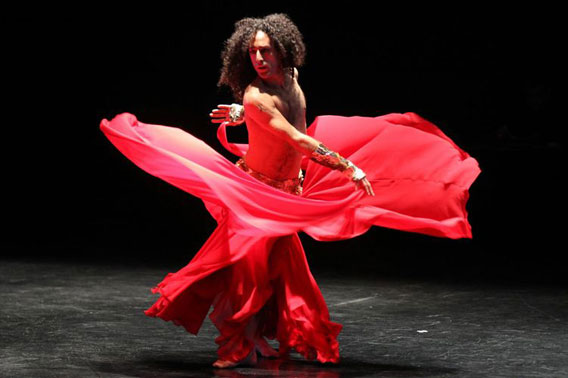 With a long mane of curly black hair and a certain gravitas offset by a fun-loving nature, Paulikevitch returned to Beirut a short time ago following the triumphant European premiere of his dance performance Tajwal (stroll), which earned him coverage in major French newspapers Le Monde and Libération and on television (see video below). Dressed in a stunning chiffon red costume created by Lebanese designer Krikor Jabotian or completely encased in a flesh-colored jersey body suit in a dance evoking mutilation, Paulikevitch’s performance was alternately spell-binding and heart-breaking and profoundly generous. His contemporary baladi choreography was inspired by invective fired at him by men in the streets of Beirut, but also by the violence inflicted on Lebanese society after years of conflict. Against a background of electronic music, singer Yasmine Hamdan slowly and precisely recites the coarse insults in her velvety Arabic while Paulikevitch’s lithe body undulates and spins, simultaneously conjuring the beauty, violence and intense desire for freedom that are all components of his life. 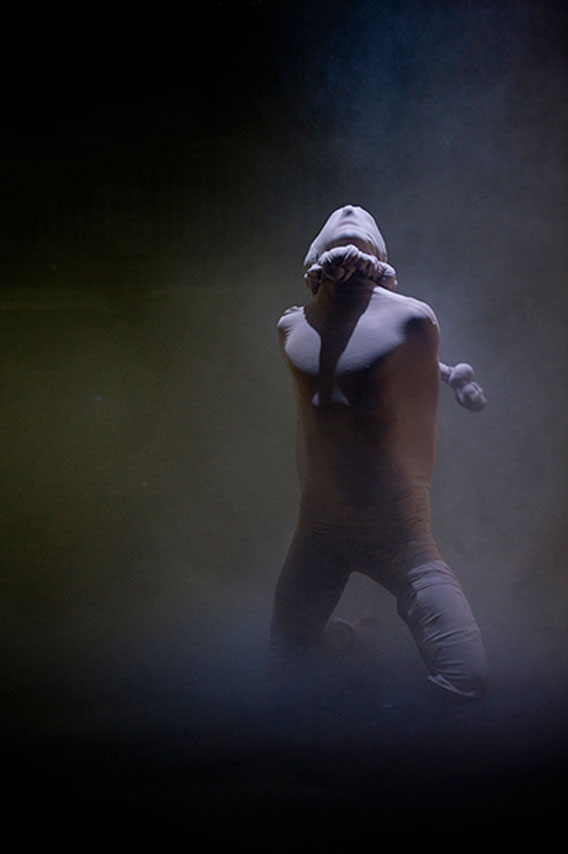 Born in 1982 during the Lebanese civil war, just before the Israeli invasion of Lebanon and siege of Beirut, Paulikevitch grew up in the Christian neighborhood of Achrafieh. He attended an all boys parochial school until his junior year of high school, when he switched to a co-ed school and made fast friends with two girls who “helped me to not be ashamed,” he said.

Together, the three came out as gay, and from then on he “grew psychologically, facing myself before facing society.”

Paulikevitch was a hyperactive child, but because of the necessary confinement civilians lived in during the war, “there weren’t a lot of possibilities [for movement],” he observed. One incident does stand out in his mind: when he and his sister were playing with two of his mother’s transparent babydoll nightgowns. His sister wore the pink one, Paulikevitch the green, and he began running through the apartment with it on. “My father yelled at my mother and ordered me to take it off. I suppressed, then and there, my desire to dance, and didn’t dance again until I was 18.”

With his baccalaureate in hand, still shorthaired, Paulikevitch left for Paris, where he transitioned from first studying law, then management, to tackling theatre and dance.

“What France gave me were the tools to think about my dance; I learned theory,” said Paulikevitch, who added that, at the time, he was a blank page that needed to be filled. In Paris, he also connected with his feminine side, wearing make-up and dressing as a woman. Always intent on returning to Lebanon, he worked on his dance technique, all the while cultivating himself in performance arts. Paulikevitch danced with the Parisian oriental dance company run by Leila Haddad, and returned to Lebanon following Israeli’s 34-day war on Lebanon in 2006. Like many Lebanese following their various wars from outside the country, Paulikevitch was shocked at what he felt was biased media coverage; it was at this moment that he understood the importance of networking and social media, he said, a skill that he uses deftly today for his political interests.

The return to Lebanon was challenging on all fronts. In a country devoid of funding for artists, Paulikevitch joined the ranks of a lively, creative, anti-establishment movement in which artists operate with a bare minimum of capital. It was also a time for Paulikevitch to continue the self-examination he deems necessary in order to be able to live one’s differences in a traditional society. “Life was very harsh on me," he said. "When you are a victim of physical aggression in street, when the fact that you are different provokes so much violence, either you break down and say I can’t, or [in my case] I decided to learn martial arts to be able to defend myself. From weakness you gain strength. We tend to victimize ourselves. I solved these problems.”

But it took a near-death beating for Paulikevitch to be able to turn his pain into power. “When something that harsh happens, you definitely rethink your relationship to the city and to people. But I fought back. I chose to get back to life, to say I’m here. I’m not moving. This event made me realize the importance of someone who has a discourse like mine. It’s an awareness that I gained; I have something to say and a role to play.” 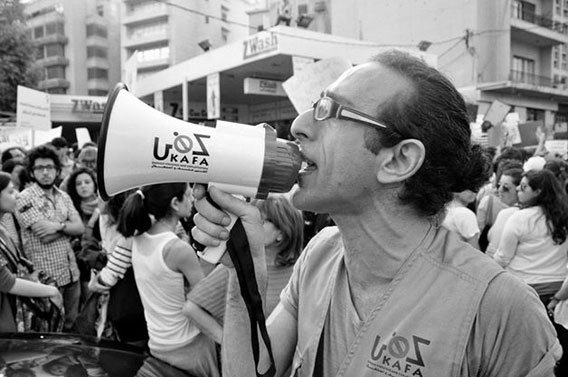 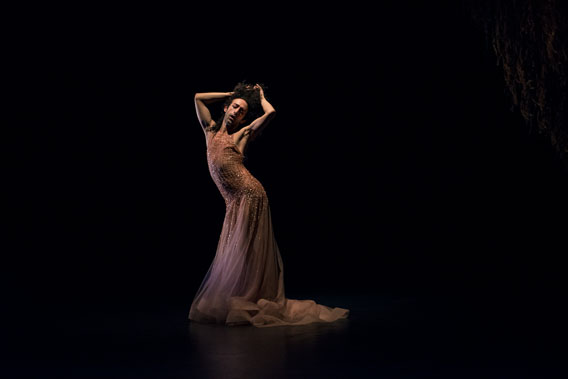 A small yet important example of the success achieved by Lebanon’s gay community is the disappearance of the word chaz (pervert) when referring to gays in the mainstream media. Now, says Paulikevitch, they are referred to as mithli (similar to me).

Part of Paulikevitch’s personal strength lies in the well being he has achieved in balancing both his masculinity and femininity. At the beginning of his Tajwal performance in France, he decided he would present himself to the public naked, wearing only high heels as he slowly and deliberately circled the stage. What was the point? To show his ease with his male identity just before transitioning into a traditionally female dance, accompanied by a woman’s voice pronouncing insults that only men had shouted at him.

But it would be an unqualified mistake to think that Paulikevitch only fights on a homophobic front.  Anxious to be rid of categorizing, he has been involved in the organization of demonstrations supporting secularism and women, and he is a staunch supporter of local networks among neighboring Arab countries. He is hopeful about their evolution:

“I have political engagements towards Syria and Palestine essentially because Lebanon is extremely influenced by what happens in these countries," he said. "I have artistic connections with Tunisia. The Arab youth from Morocco to Syria needs to connect and come together and make these societies evolve. I’m tired of the post-colonial relationship we have with the West. We need an inter-Arab alliance, conversation, think tanks.”

Because politics are “so beyond us,” Paulikevitch works towards his political positions through art. “We are getting there. War is not just about bombs. My war is via art and media and culture. My work is for an Arab public and it is here that things are happening for me.”

While he is in Egypt, Paulikevitch will be continuing research for a documentary film he is working on about the socio-historical background of baladi. Ten days before the Egyptian presidential elections, the International Day Against Homophobia will take place. Paulikevitch hopes that we are moving towards a more versatile, colorful society, rather than remaining a binary one. 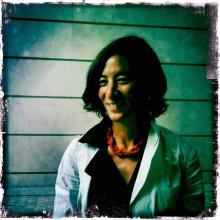 Olivia Snaije is a journalist and editor based in Paris who writes about the Middle East, multiculturalism, translation, literature, and graphic novels. Her latest book, Keep Your Eye on the Wall was published by Saqi Books.

Empower a woman, empower an eco-system
Preethi Nallu
Like any of the articles? Support our work.
Donate Now