“I suspected one could sometimes learn more as a wanderer than as a journalist.” 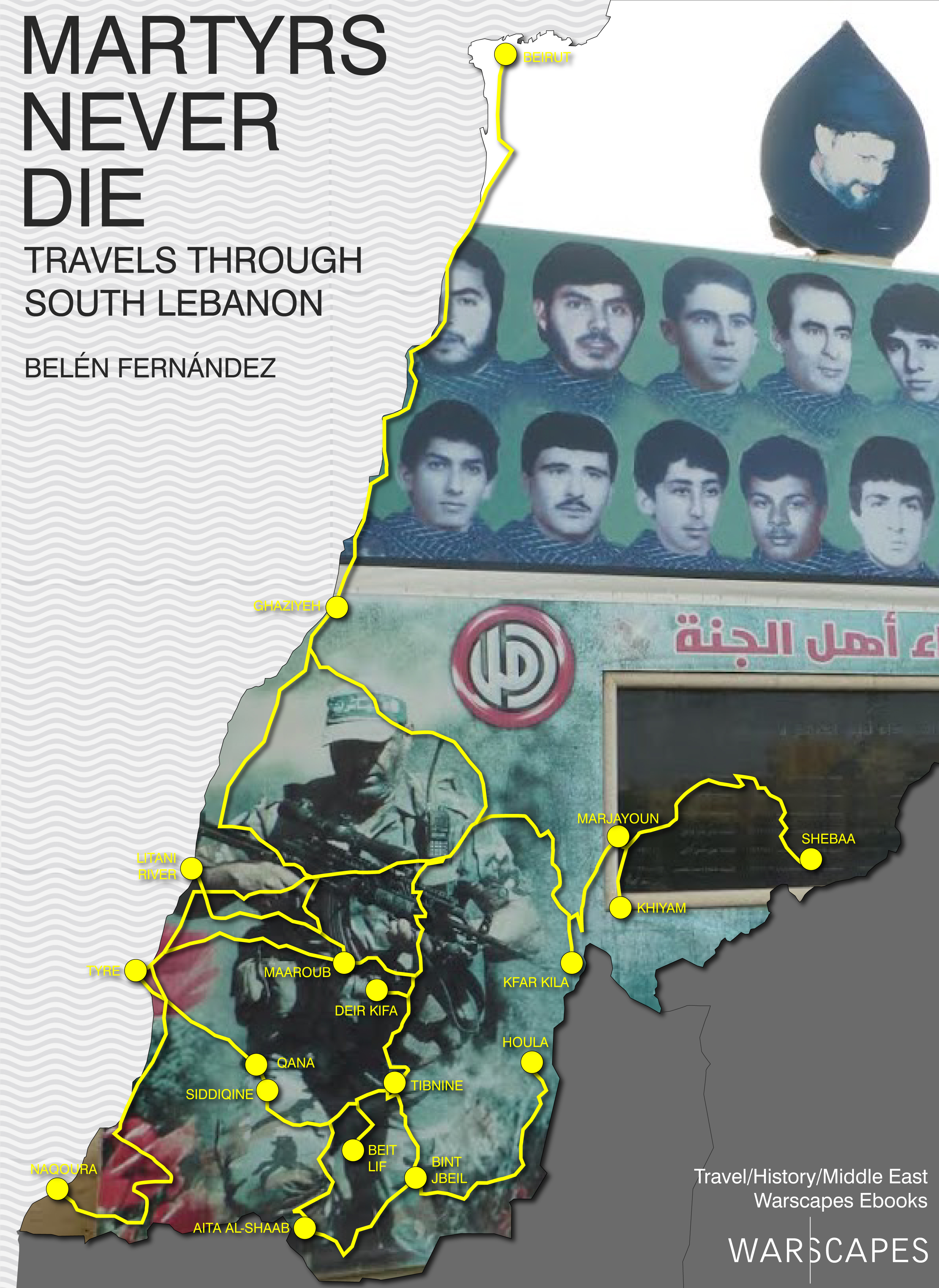 Belén Fernández hitchhiked through Lebanon in 2006 and again in 2016. Her travelogue, Martyrs Never Die: Travels through South Lebanon, weaves today’s Lebanon through the time and space of a decade, in a country where “no space is left unpoliticized”.

Fernández leaves her meandering route to the fate and goodwill of her drivers, and her journey leads to encounters with fishermen, Hezbollah fighters, grandmothers, United Nations soldiers, Lebanese intelligence officers, and a Syrian bread delivery man. Asking everyone she meets along the way, “Were you here in 2006?”, Fernández bears witness to varying accounts of the previous wars and the current violence in Syria, memories of each war now colored by all the others since.

Many of the small border villages Fernández visits are described in the New York Times, often with one-liners like “Hezbollah stronghold”. In Martyrs, the bird’s-eye view of the Guardian and BBC are exchanged for a granular view of Lebanon that belies Western media depictions.

Fernández wades into the milieu with observant humor and a soft touch. Martyrs lays one snapshot of southern Lebanon over another, and finds light in between.

"Not many young women would stand on a lonely road near Bazouriyeh, home of the Hezbollah leader Hassan Nasrallah, to make what the French call auto-stop. Yet nearly all her drivers were courteous and went out of their way to take her to places off their route... It is a disappointment that the tale was over within an hour's read. I look forward to the sequel."
- Charles Glass, The Times Literary Supplement

"I read this absorbing travelogue at one sitting, simply because I couldn't put it down. When is the last time I enjoyed a book so fully? Fernández's writing is brilliant, hilarious, compassionate and unflinching. Martyrs seethes with moral outrage, yet is never shrill or preachy. If I were a media mogul, I would create a Hitchhiking Bureau for this brave and insatiably curious wanderer, and send her all over the globe."
- Liza Featherstone, contributing editor to The Nation and author of Selling Women Short: The Landmark Battle for Worker's Rights at Wal-Mart

"Belén Fernández's Martyrs is an absorbing look at south Lebanon in a way that few outside its resilient villages have ever seen. Fernández draws a picture of south Lebanon which not only destroys the stronghold myth, but humanizes those we have lost to occupation. She brings them to life."
- Roqayah Chamseddine, Journalist at Shadowproof

Belén Fernández's Martyrs Never Die is a powerful account of the ghosts of wars past and present in the Middle East. Fernández reflects on travels and encounters in a place haunted by the brutal histories of Israeli war-making and caught up today in the ravages of Syria's civil war. Martyrs humanizes, in humorous and touching ways, Southern Lebanon. It also captures the spirited resilience and political ambivalences of communities and peoples in a place that too few bother to consider. Accessible and engaging, it should be widely read by those seeking to make sense of not just Lebanon, but of the daily reminders of war."
- Toby Craig Jones, Associate Professor of History at Rutgers University

"Hitchhiking and travelogues are most often superficial and avoid controversy. In contrast, Fernández produces an eloquent reportage, on places and people in parts of Southern Lebanon, who have experienced and endured war and displacement from multiple Israeli invasions. She writes with panache as she enables the reader to hear the voices of real people. They not only survived, but have eloquently displayed the resilience of the human spirit. But Fernández does not stop there, she invites us to experience life and its daily rhythms. The Lebanon she excavates includes history, culture, resilience, and real people. Her testimony is lyrical and serves as witnessing for peace."
- Nubar Hovsepian, Chair of Political Science at Chapman University and editor of The War on Lebanon: A Reader.

Belén Fernández is a contributing editor at Jacobin Magazine and the author of The Imperial Messenger: Thomas Friedman at Work, published by Verso. She has written extensively for the Al Jazeera English, The London Review of Books blog, Middle East Eye, Telesur English, VICE, and Warscapes. She studied political science at Columbia and the University of Rome La Sapienza. Her latest is Homeland (Finding My Way From Lebanon To Honduras And Not Getting Killed In The Process) from OR Books.