View Bawazir's statement of intent for the performance protest here.

Jessica Rohan: Your performance protests against both drone strikes and assassinations. Why did you choose to address these topics for your performance?

Mohammed Bawazir: Numerous civilians were, purposely or mistakenly, victims of AQAP’s assassinations or of drone strikes. The assassinations created a general feeling of terror at all times and all places, as they took place without consideration to the safety of innocents in the area; the exact same feeling was created by drones from above. We believe that both are considered extrajudicial killings and both are affecting civilians directly and indirectly. AQAP appointed themselves the prosecutor, judge and jury in their cases against civil and military officials, and the same applies for the U.S. drone strikes against Al-Qaida affiliates. We wanted for history to write someday that we, the youth of Mukalla, have stood and spoken our minds against all types of extrajudicial killings, especially where innocent lives are involved.

JR: You filmed the performance protest in 2014. Are the themes of the video still relevant for Hadhramout today?

MB: Since our protest there have been notably fewer assassinations and strikes. That was not because we were that effective, however; a greater plan was taking place in the area. AQAP overtook Mukalla in April 2015, a year after our performance, appointing themselves the rulers after eliminating all possible threats, and now they do not have to follow the hide-and-kill method anymore. Simultaneously, drones conducted several strikes that hit the intended targets, killing many AQAP affiliates but no reported civilians. Extrajudicial killings still occur, but at least civilians are kept away from the conflict.

JR: What is the current situation in Mukalla for performance art? Would a video like this be possible in the current moment?

MB: Mukalla is now under total control by AQAP, so arts are not quite welcomed at the moment. For instance, all pictures, sculptures and paintings of humans have been obliterated, and assaults are inevitable anywhere music is played. Any sort of art display is done underground, away from the soulless eyes of the new rulers. However, we were able to open a painting exhibition a few months ago, and that went surprisingly well. For the second part of the question, we have recently tried to carry out a similar protest, but unfortunately failed due to security threats. Our attempted protest tried to depict the current situation in which the people are living without pointing directly to the cause, Al-Qaida. The status quo does not support such performances at all because it is automatically considered a threat to Al-Qaida's existence in Mukalla. 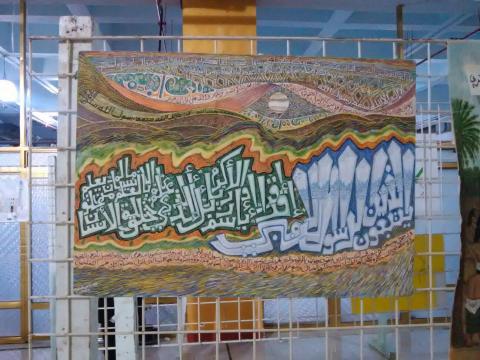 JR: Do you have any new projects coming soon?

Mukalla has been at a standstill since last April, when Al-Qaida came to town. Therefore, we have suspended most of our plans and projects indefinitely. However, if life and funds start flowing again next year, we will get back on track. The most prominent of those ideas is a TED-like quarterly event where artists can inspire each other by sharing experiences from their respective fields.

Mohammed Bawazir is a 22-year-old artist, activist and entrepreneur from Hadhramout, Yemen. He is the founder of Talents of Hadhramout, an organization which supports young artists.

Opinion by Laura Kasinof
Yemen's Change Square, Ten Years On
Reportage by Steven Herran
Social Media State: Crushing Colombia's "Cacerolazo"
blog by Warscapes
African Authors Sans Frontieres in Solidarity with African-Americans
Reportage by Ahmed Hezam
Dispatch from Yemen
Conversations by Michael Bronner
On the Line from Yemen
Opinion by Anonymous
Yemen: A death on the Najran Front
Conversations by Michael Bronner
Saudi-led Coalition Launches Huge Airstrikes on Yemen's Capital
podcast by Hassan Ghedi Santur
Slaughter at Sea: Somali Refugees Gunned Down
Reportage by Ahmed Hezam Al-Yemeni
A Portrait of War: Returning Home to Yemen
Conversations by Masarat Alam
Beyond the Killing in Kashmir
Like any of the articles? Support our work.
Donate Now