The recognizable gun parts used to create the sculptures in Looking Forward towards Peace by Remembering the Past are distinct; the young boy’s head is composed of a pistol grip, recoil springs from AK47s shape the arms and legs of the figures, and a trigger guard and trigger define the baby’s head.  This sculpture (images 1 & 2) depicts a family devastated by war but fighting to survive; a mother and her young son struggle to move forward, while the baby on the mother's back looks at Mozambique’s past.  All of these weapons were collected through the non-governmental organization Christian Council of Mozambique's (CCM) project, Transforming Arms into Plowshares/Transformação de Armas em Enxadas (TAE). TAE collects, destroys, and recycles decommissioned weapons from Mozambican wars and transforms them into art.  2012 marks the twentieth anniversary of Mozambican peace as TAE continues to successfully promote this peace as well as serving as a paradigm for global peacekeeping.

Mozambique’s civil war (1976-1992) almost directly followed their battle for independence from Portuguese colonial rule (1962-1975). This war was fought between the new ruling party, The Liberation Front of Mozambique/Frente de Libertação de Mocambique (Frelimo), and the Mozambican National Resistance/Resistência Nacional Moçambicana (RENAMO). Mozambique's civil conflict precipitated economic collapse, famine, nearly one million war-related casualties, and the internal and external displacement of several million civilians. Bishop Dom Dinis Sengulane founded TAE in 1995, aiming to establish peace and democracy for Mozambique following the 1992 General Peace Agreement in Rome. Bishop Sengulane explains that his project is based on the Biblical verse ‘…and they shall beat their swords into ploughshares. And their spears into pruning hooks: nation shall not lift up sword against nation neither shall they learn war anymore’ (King James Bible; Isaiah 2:2-4). This well known verse reflects not only the desire to promote peace, but also alludes to a pervasive theme in the arts of Mozambique: recycling.

Closely examining the many different pieces of destroyed arms in sculptures such as Looking Forward towards Peace by Remembering the Past underscores the power of the weapons’ materiality. Exploration of the materiality of weapons transformed into art is fuelled by Igor Kopytoff's focus on an object’s transformation from its initial use through its many lives in his seminal essay, “The Cultural Biography of Things.”  Kopytoff’s focus on the ‘lives’ of objects provides a framework for grasping the potent message the past lives of weapons impart as these artworks are viewed.  Most crucial to an examination of TAE’s war recyclia is Kopytoff's question, “How does the thing's use change with age and what happens to it when it reaches the end of its usefulness?” The TAE project represents a challenge to Kopytoff - demonstrating through their artworks created of weapons of war that the life of an object does not end. Conversely, TAE reveals through its artworks that in their reincarnation as recycled materials, weapons gain more expressive power as they are transformed into art.

Deconstructing TAE artworks and exploring the motivations of Mozambican artists such as Jorge José Munguambe (Makolwa), creator of Looking Forwards towards Peace by Remembering the Past, reveals the explicit aims of the artists. Of his artwork, Makolwa explains, “I hope to show people the guns that were used during the war to remind them of the destruction of Mozambique's struggle for independence and the civil war. By remembering the past, I hope to show Mozambicans and the world the power of peace through memories of what will never happen again.”

The sublime visual power of TAE artworks engages viewers to remember the violence and destruction of Mozambique's protracted history of war. TAE's purposeful destruction and transformation of recycled weapons of wars enables these arms to make visible the invisible concept of peace – through the potent symbolism of artworks composed of former tools of killing. Whereas the weapons TAE collects are physically cut to prevent their further use, the recognizable shapes of the gun parts remain, creating iconic symbolism. By recycling weapons of war into art, healing and commemoration are achieved in addition to preventing the weapons from killing again.

Bishop Sengulane used the principle of transformation as a guide in his original plan for TAE – to collect weapons, make them non-usable, and give an instrument of production (incentive) in exchange for collected weapons. Originally incentives consisted of such materials as bicycles, sewing machines, and plows. Today, diverse incentives such as farm implements, seeds, cement, zinc roofs, and even tickets for trips to home villages are not unusual.  Weapons exchanged from demobilized soldiers, individual civilians, and eventually entire communities follow similar frameworks exchanging arms for products or services. TAE obtains access into communities by focusing on traditional grassroots ideals based on trust and the sharing of food, drink, and eventually information. After gaining a community’s acceptance, TAE representatives are often led to weapons that have remained hidden since the civil war. TAE National Coordinator Boaventura Zita has commented that while the response to the TAE project has been great so far, “the truth is that there are no numbers on how many weapons existed in the first place.” This causes great alarm among TAE officials regarding the unknown number of weapons still remaining in Mozambique and the great danger this poses for maintaining the country’s peace. In many ways eradicating the unknown number of remaining weapons today is even more important to the preservation of peace in Mozambique than when the war ended in 1992. Antonio, a current TAE informant and former child soldier, hauntingly echoes this concern, “If somebody wants to start a war in Mozambique (now) it is so easy because weapons are spread all over.”

TAE artworks evoke the memory of Mozambique’s long history of war for viewers as well as serving as a potent process for the artists, many of whom lived through the civil war in Mozambique and are motivated to promote peace in their creation of art. The visual impact and transgressive nature of TAE sculptures is largely rooted in the tension created in their sublime materiality. The artworks, comprised of cut and dismembered weapons of war, maintain the power of their original forms, challenging the viewer’s preconceived ideals of art and beauty.  These sculptures are not beautiful, nor are they easy to look at – these artworks are created from tools for killing that are transformed into tools for reconciliation and peacebuilding.

TAE’s destruction and re-presentation of weapons is based on the visual language of the weapons’ materiality in the promotion of peace. TAE’s sublime art of weapons transformed presents an alternative identity for contemporary Mozambique. This visual narrative moves beyond Mozambique’s past reliance upon socialist revolutionary imagery wherein the pristine, iconic form of the AK47 is employed. (The current flag of Mozambique, adopted in 1983, portrays a bayonet fitted AK47 assault rifle that is crossed with a hoe, creating the shape of an X). TAE artists present contemporary Mozambican society glorifying peace instead of war – symbolized through instruments of war destroyed and transformed.

Seemingly in contradiction to the original use of weapons as tools for destruction, the TAE project reveals the power of recycling through artistic transformation. TAE artists create and perpetuate the invisible concept of peace in their creation of artworks of remembrance, reconciliation, and peacekeeping not only for Mozambique, but globally through their artworks constructed of weapons of war.

1) Looking Forward Towards Peace by Remembering the Past by Jorge Jose' Munguambe (Makolwa).

2) Close-up of Looking Forward Towards Peace by Remembering the Past by Jorge Jose' Munguambe (Makolwa).

4) I Give You my Peace by Silverio Salvador Sitoe.

6) Collected guns of TAE laid out.

Amy Schwartzott is a PhD candidate at the University of Florida, where she specializes in contemporary African art history. She is currently a Centre for Conflict Studies Fellow (2011-2012). Amy has been conducting research on African artists who use recycled materials as media since 2007, and has recently returned from dissertation research in Mozambique funded by a Fulbright-Hays grant. 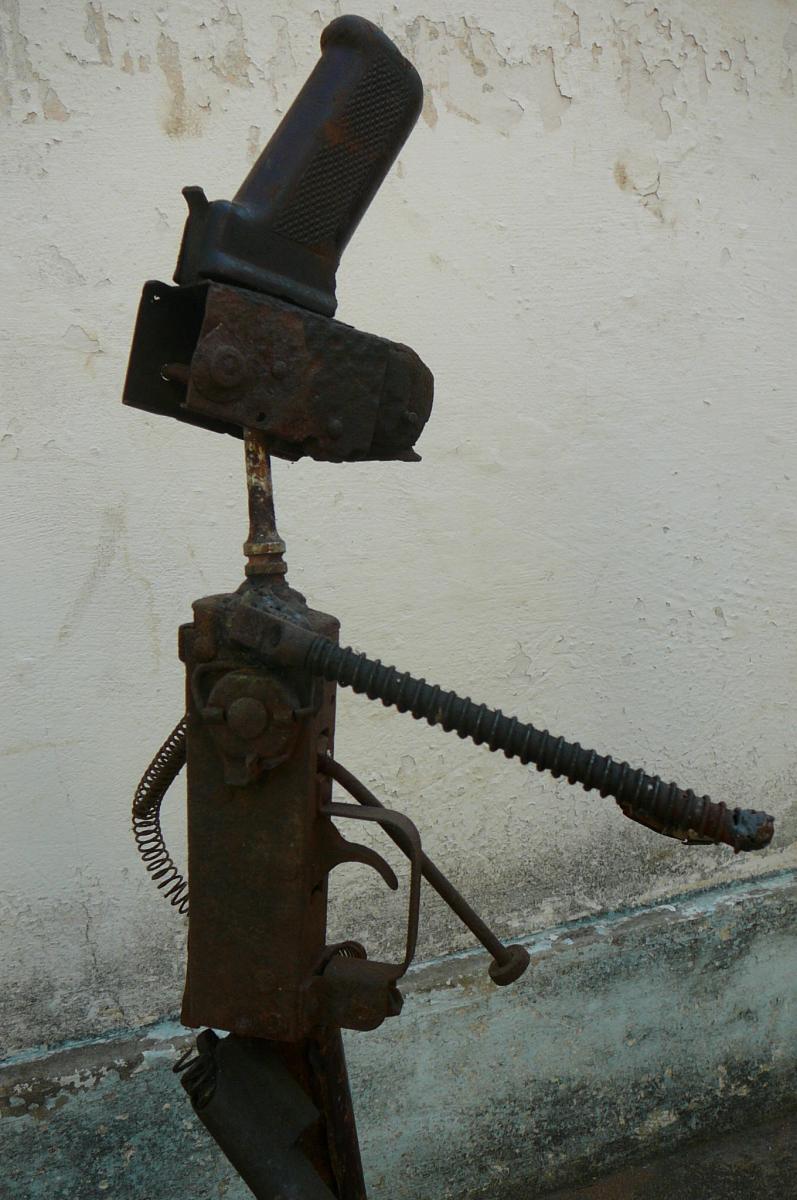 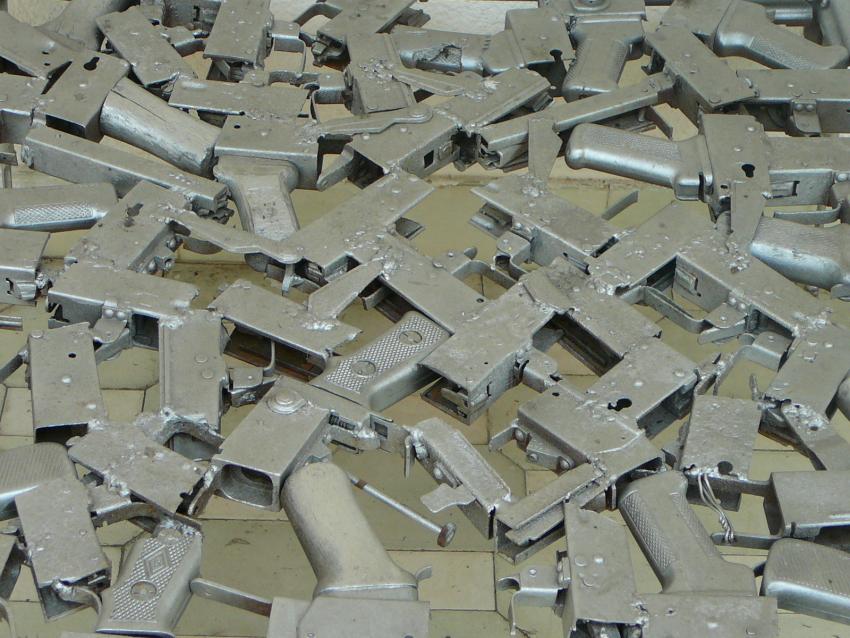 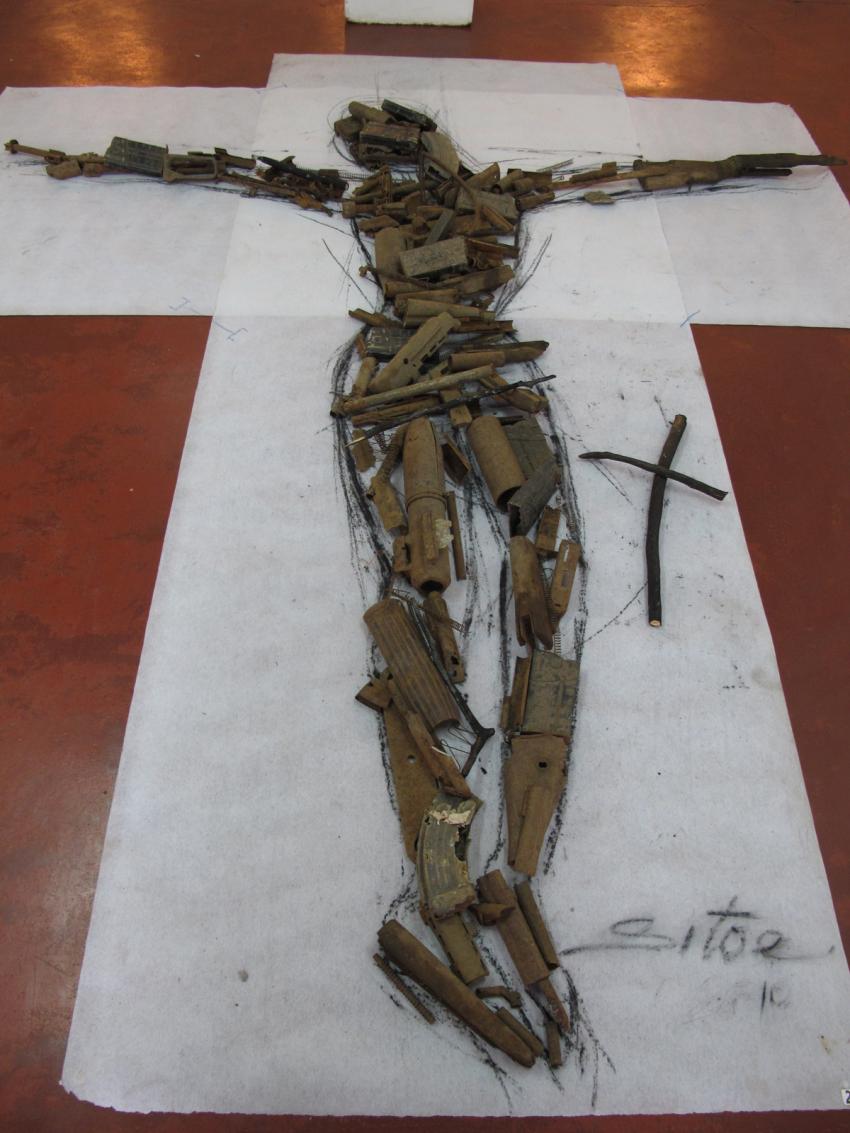 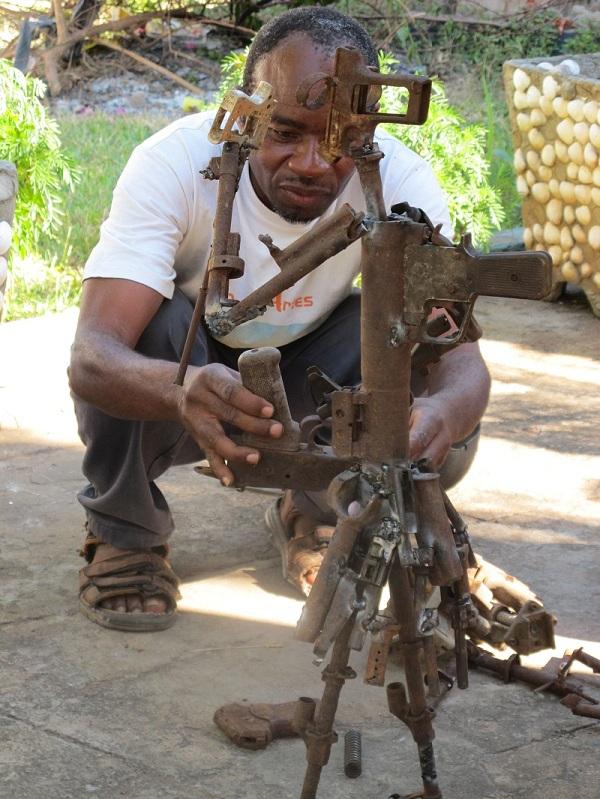 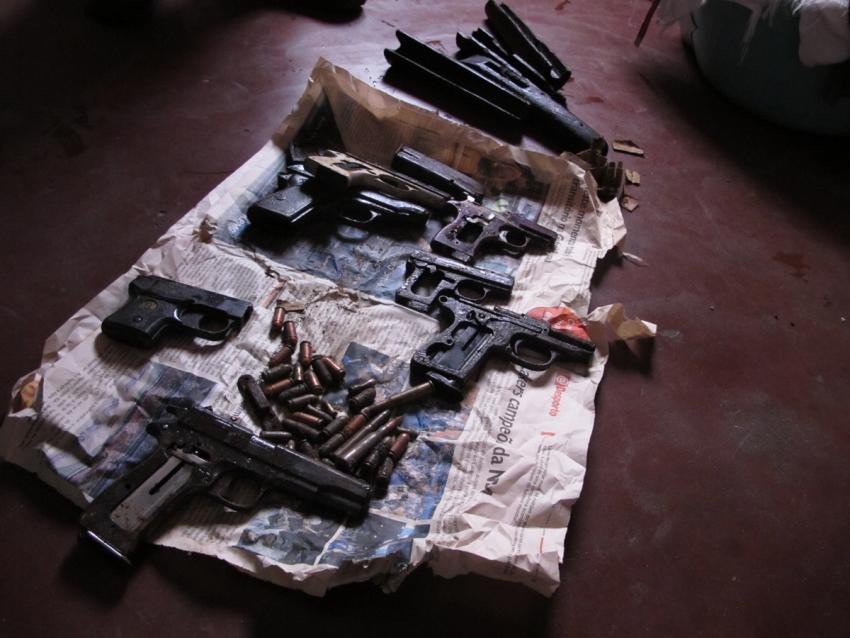 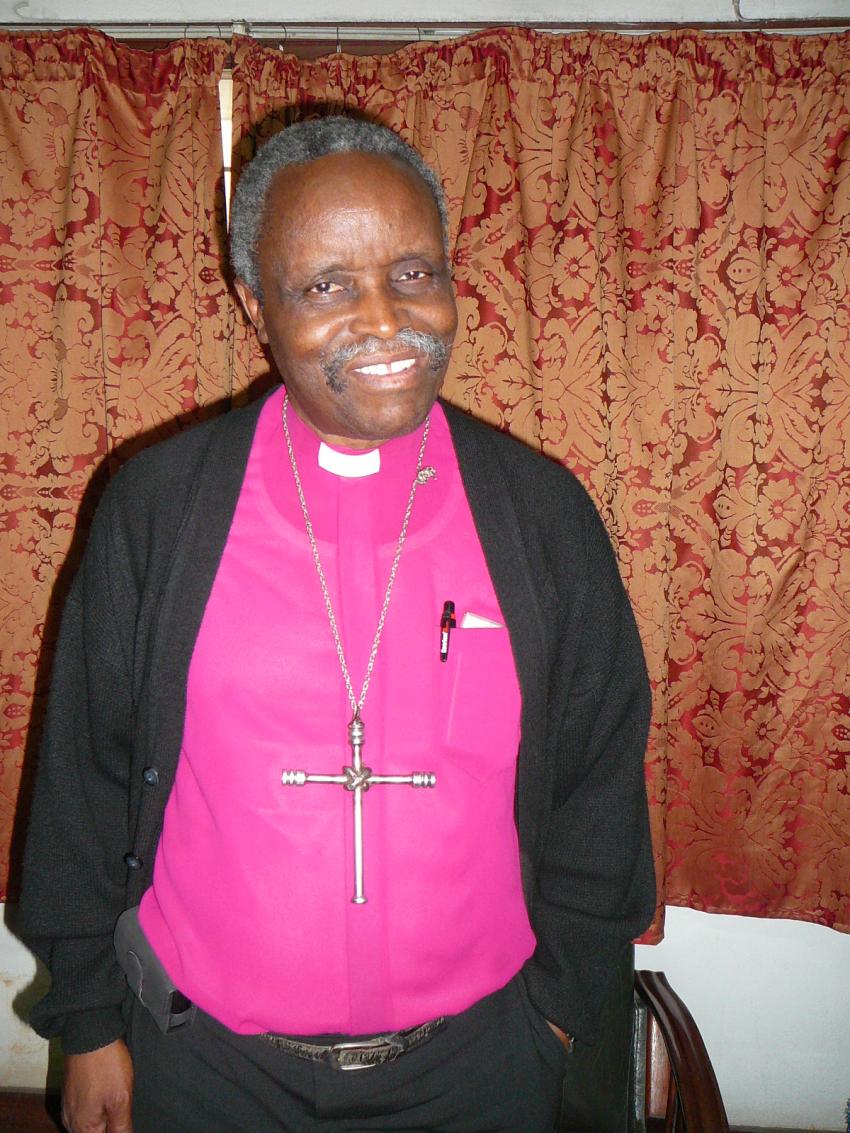 Black Intimacies, Racial Reckoning and the Need for Emotional Justice
Like any of the articles? Support our work.
Donate Now