“People here have washed themselves clean of old ties. You should be doing the same: letting go of old attachments, not pursuing them,” says a character in the opening pages of The Childhood of Jesus to Simón, a man presumably in his forties, who has arrived “here,” at Novilla, with David. David is a child and for the time being under Simón’s care, although no tie of blood exists between them. David was separated from his mother on the boat that was bound for these alien shores, and 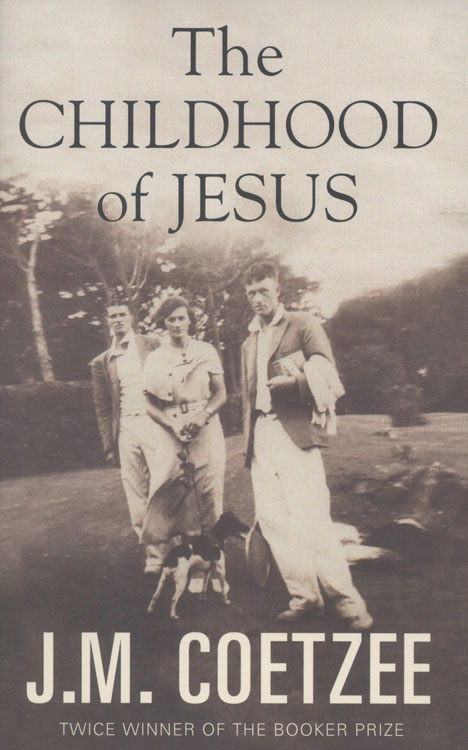 Simón has taken on the responsibility of the child till they succeed in finding David’s mother. These are not their real names; upon arrival they have been issued new names, ages, birthdates—in short, new identities, like everyone else in Novilla has been. Simón has never laid eyes on the woman, how then does he plan to find her?

Just like Simón’s baffling insistence that he will recognize David’s mother when he sees her, most of the characters in the novel seem to be driven by similarly inexplicable beliefs and convictions. Simón meets a woman, Inés, while she is playing tennis, and feels that there is something ‘obscurely familiar’ about her. Very soon, he springs it upon this young, to all appearances virginal, unmarried woman that she should be the mother to this young child that she has met only once. The woman, after the initial shock, agrees surprisingly quickly, although it is clear very soon that she has little comprehension of the practical consequences of her decision. David is an unusual child, one soon realizes, extraordinarily receptive and intelligent but making sense of the world in entirely different ways than those that the people around him are accustomed to. This non-conformity creates tension in Novilla, a place where universal benevolence lives in close conjunction with an acceptance of the rule of the herd.

The novel persistently inhabits a twilight region between materiality and abstraction. Although we are furnished with plenty of details—the language spoken in the land is Spanish and the cargo unloaded at Wharf Two is of grain and no meat is consumed there—we never quite know where Novilla is, and as we progress through the narrative, the idea of what Novilla is becomes increasingly shadowy. After a few days there, Simón is stumped by Ana, a young and attractive woman who lays surprising emphasis on curbing one’s physical desires and drives. He can’t help saying:

“Do you know what surprises me most about this country? ...That it is so bloodless. Everyone I meet is so decent, so kindly, so well-intentioned. No one swears or gets angry. No one gets drunk. No one even raises his voice. You live on a diet of bread and water and bean paste and you claim to be filled. How can that be, humanly speaking? Are you lying, even to yourselves?”

The whittled-down prose remains restrained throughout, never veering into moments of heightened passion, never striving to make the reader’s work easier. I found myself anticipating a sudden rupture, a sudden confrontation that never came. Novilla might be a utopia, but perhaps the idea of utopia of any kind has become irrecoverably alien to us in its lack of violence and passion. The desirability and necessity of certain human instincts might very well be questionable, but the fact remains that they do exist and are always visible, and a sudden and complete elision of those experiences gives rise to a coiled sense of unease.

Given that the Jesus of The Childhood of Jesus never quite appears in the course of the novel, it is tempting to read it as an allegory, to interpret the events and characters as mere ciphers to a much vaster web of meanings. David goes a long way towards giving this approach credence—the boy has been “given” an age of five but the way in which he negotiates the concepts of language and mathematics can hardly be dismissed as childish flights of fancy. Meaning, for him, is constantly in flux; he wishes to take Don Quixote and read it in his way, make it his own book. His faculties are perfectly alert, he is capable of reading and writing and calculating, but he cannot bring himself to do so in class without a tremendous force of will. Is that because, as Simón believes, when David sees an apple, he sees an apple instead of one apple? It seems that for him value is determined on the level of the purely individual and relative, he is unable to reduce a thing to its numerical index. “It is as if the numbers were floating in a great black sea of nothingness, and he were each time being asked to close his eyes and launch himself across the void.” The bulk of the novel is taken up with such deliberations. Everything from intuition and rationality and anarchy and instinct is pondered upon, often in unexpected circumstances. It is a testament to Coetzee’s craft that not only is the novel not tedious through all of this but it remains an engaging and peculiarly moving read. As the characters test their own beliefs and puzzle out their own stances, one might find oneself similarly doubting the basis of many things that one has been accustomed to take for granted.

Even for someone who is not steeped in Christian iconography and allusions, some of the images are too heavily invested with religious associations to miss. David speaks of reviving a stevedore who had drowned in the hold of a burning ship by sucking the smoke out of him, and he says at one point that he can see what Simón is thinking. There are clear parallels in the Simón-Inés-David triad to Joseph, Mary and Jesus. Inés is virginal and Simón insists that he is neither the father nor the grandfather of the child, and yet Inés seems devastated at the prospect of David being taken away to Punto Arenas, a special school for the differently abled, and Simón remains invested in his role as the godfather/guardian figure. However, it is difficult (and not entirely profitable) to reduce the novel and its characters to a clear set of equivalents, and approaching the book as either purely literal or purely allegorical has its pitfalls. The Childhood of Jesus is not a book that yields its secrets easily, and one risks a reductive evaluation when trying to coax meanings into or out of its tricky crevices. Coetzee’s remarkable achievement lies in making the novel so richly textured, such a sustained exercise in layers of meaning that each successive visit reveals hitherto unsuspected depths; and yet, even in the first reading, the book remains puzzling, but never inaccessible. The novel, despite its stratified nature, is about stripping life down to its kernel and finding out what it means to be alive under extraordinary circumstances. And what does it mean when it comes down to the essential, when the trimmings fall away? Perhaps one can best sum it up with Simón’s answer to David’s question, “But after we find her, what are we here for?”

“I don’t know what to say. We are here for the same reason everyone else is. We have been given a chance to live and we have accepted that chance. It is a great thing, to live. It is the greatest thing of all.”

Upasana Dutta is completing her Masters in English Literature at Jadavpur University, Kolkata. Her translations have appeared in Hachette India’s publication The Crazy Tales of Pagla Dashu and Co., and her essay has been published by Coldnoon, a literary journal of travel writing. She also volunteers for an organization that works for the rescue and rehabilitation of women and children who are victims of trafficking and violence.

The Childhood of Jesus
Hardcover
$8.90
Buy from amazon.com

Waiting for the Barbarians: A Novel (Penguin In...
Paperback
$9.42
Buy from amazon.com

Life and Times of Michael K: A Novel
Paperback
$9.37
Buy from amazon.com

The Master of Petersburg: A Novel
Paperback
$9.55
Buy from amazon.com

In the Heart of the Country: A Novel
Paperback
$8.64
Buy from amazon.com

Doubling the Point: Essays and Interviews
Paperback
$40.72
Buy from amazon.com

Literature by Saligrama K. Aithal
Silly You!
Poetry by Charles Cantalupo
Self Portrait (Artist Unknown, Florence, ca. 1471)
column by Suchitra Vijayan
The State as Executioner
blog by Arpita Mandal
The Politics of Beef in India
Reportage by Sally Kantar
‘Slivers of Hope’ for Thailand’s Pakistani Refugees
blog by Syed Sami Raza and BS Hons. Students
Revisiting Charlie Hebdo: Students in Pakistan Respond
Reviews by Jordan Kiper
Beyond Utopia: The History and Future of Human Rights
blog by Grace Jung
The Psychological Benefits of Reinstating Buddhism Back into South Koreans' Lives
Like any of the articles? Support our work.
Donate Now