These fragmentations only mean that
I am fragmented,
That as I symbolize what you say and agree
Can I then leave you
To set these lines in order,
Assemble them into a book
And by the first strong winds,
Permit its leaves to be torn from its cover.
Let them fly high and, like leaves,
Light into the lap of the Universe
Separate of and by themselves
Within without complete
Yet incomplete.

My last day of 2015 was spent in California’s Mojave Desert, just about 2 hours from Los Angeles, strolling through the palpable legacy of Noah Purifoy (1917-2004) at the Joshua Tree Outdoor Museum. Surrounded by Purifoy’s assemblage installations, I reflected on a year of thought-provoking art, my own curatorial transnational connections, and those who are faced with the fragility of movement in the world. 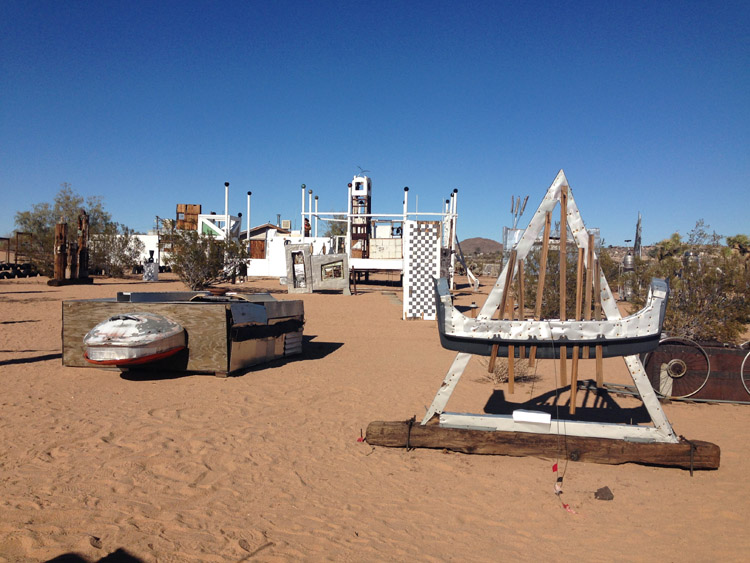 The assemblages are constructed with discarded objects across a dusty plot of land—a railroad with bicycle wheels and beer kegs; TV’s stacked on top of each other; bowling balls dangling down; towers of lunch trays; churches and graveyards; a washroom for whites and coloreds. Purifoy’s work is a playful and serious engagement with what is left behind after migration and movement. Although named an outdoor museum, the space doesn’t feel remotely like a museum; the works transcend locality in a way that forces a quiet that felt both symbolic and spiritual on the last day of the year. 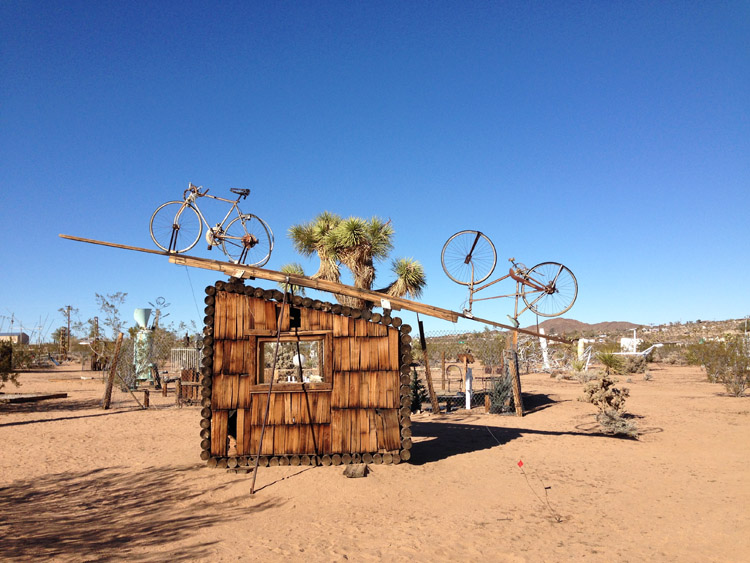 Noah Purifoy: Junk Dada at the Los Angeles County Museum inspired our visit to the cold but gorgeous desert. Purifoy is most known for his work after the 1965 Watts Riots in Los Angeles. The riots in Watts, a predominantly Black neighborhood, were incredibly violent, with many residents shot and killed over the course of a week. The community rose in response to the vicious state violence, police brutality and economic oppression by taking it to the streets. Purifoy, the first director of the Watts Tower Art Center, felt drawn to the lingering traces of what remained after the violence had ceased. One of his earlier sculpture works came out of the charred debris of the Watts Riots. In the catalogue for the landmark group exhibition 66 Signs of Neon (1965) Purifoy reflects on his engagement with the found object:

“Despite the involvement of running an art school, we gave much thought to the oddity of our found things. Often the smell of the debris, as our work brought us into the vicinity of the storage area, turned our thoughts to what were and were not tragic times in Watts and to what to do with the junk we had collected, which had begun to haunt our dreams.”

66 Signs of Neon was co-curated by Purifoy and travelled to nine venues between 1966 and 1969. Purifoy, together with artist Judson Powell, created the first of the works featured. 66 Signs poses the question: How does one deal with the aftermath of grim riots in a post Second World War context? The exhibition catalogue reflects on how the two artists decided to build “a sculptured garden” with the found objects. The two had first envisioned the exhibition as a kind of supplement to the McCone Report, which detailed the findings of the Governor’s Commission on the causes of the riots. The exhibition was meant to stress the importance of art education. Both Purifoy and Powell felt that “creativity is the only way left for a person to find himself in this materialistic world.” Purifoy’s relationship to materialism was informed by the racial dynamics at the time and influenced the relationship he developed with the arts. From the oral history project it becomes clear that Purifoy was intentional about his disengagement from the American racialized economic structure. Purifoy defined, on his own terms, social mobility: 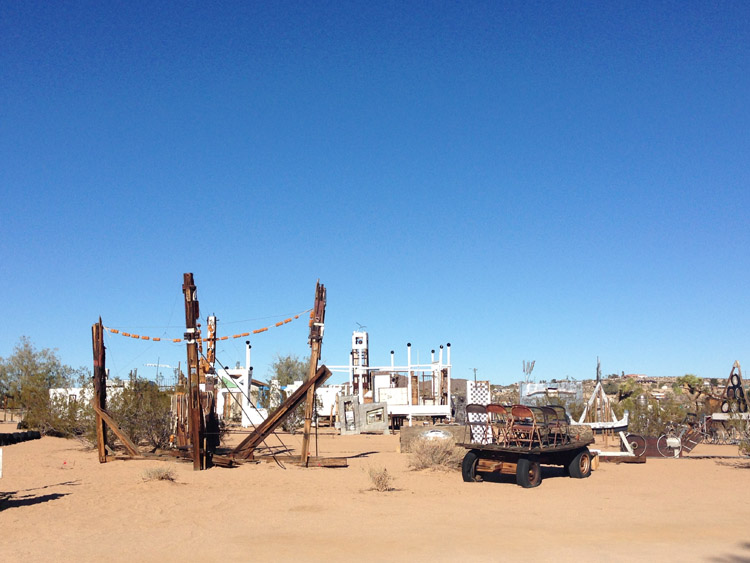 Influenced by artists such as Marcel Duchamp,2 the exhibition is a testament to Purifoy’s way of thinking and relating to the arts in a Western context as a Black artist. Yael Lipschutz, co-curator of the exhibition at LACMA, states: “66 Signs was about much more than found material and artistic strategies – it represented a frame of mind, a school of thought.” If anything, my interest in Purifoy is a result of being deeply moved and intrigued by Purifoy’s “school of thought.” His art and way of life have something to offer that widen our perception of found objects, ephemera and the futurity of installations made in a desert. The question of what remains, what transforms and what becomes could very well place this work in the realm of speculative fiction art.

Purifoy engaged the larger implications of the riots in Los Angeles when he speaks of “the imposition of order on disorder, the creation of beauty from ugliness.” The Watts riots came to signify a convergence of art and social protest while creating something grander:

“It is evident that it is a utilization of the August 11th event, but that it transcends it, and rises above social protest. It seems to be saying that there is some uncertainty about our direction. That we all take equal responsibility for the Wattses of the world, and that only we can prevent their happening again.”

Born in Snow Hill, Alabama in 1917, Purifoy travelled (like so many others during the Great Migration to Los Angeles and studied at Chouinard Art Institute (what is now CalArts) to finally pursue a high-end furniture design career. Early design plans of his work were included at the LACMA exhibition.

Coming from a background of diasporic travel and migration myself, by way of India, South Africa and finally Europe, I related to the forms, shapes and lines of movement I recognized in Purifoy’s work. I saw boats, travelling constructions, connecting wires and churches, but also color and patchwork stories made of memorabilia. While some of his work is playful and light there are clear and necessary reminders of his upbringing in the South. Take the work called “White/Colored”: we see a normal drinking fountain under the “Whites” sign and a toilet bowl instead of a drinking fountain under the “Colored” sign. The piece alludes to the Jim Crow era and also serves as a stark reminder of apartheid South Africa. His artworks bring up questions of memory making as well as the question of what becomes a memorial. 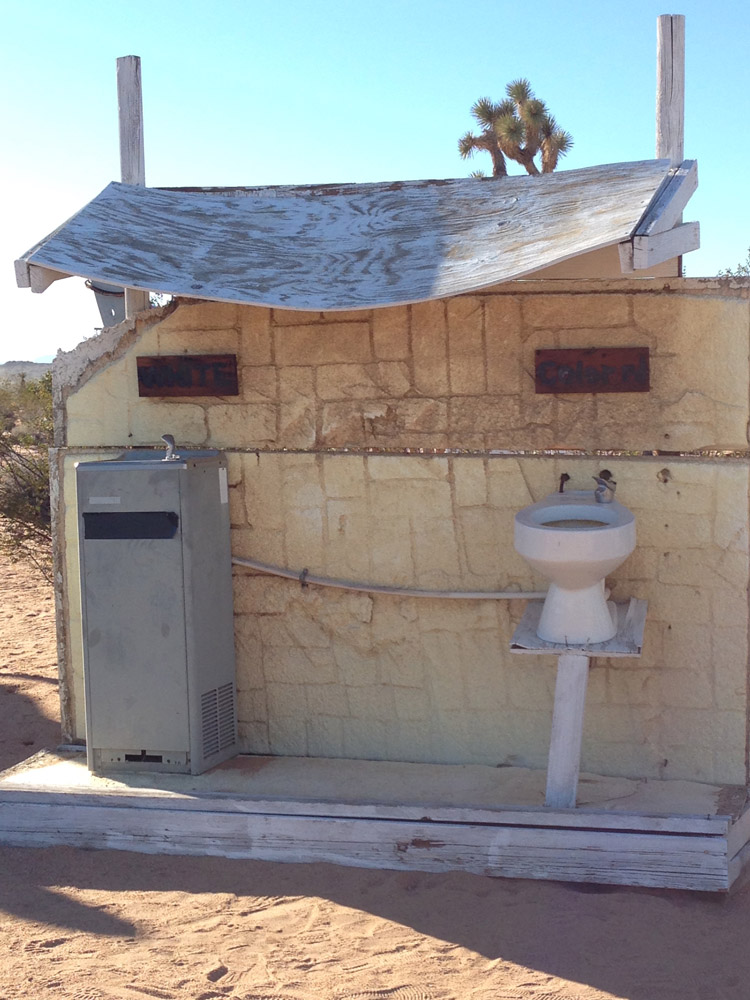 Purifoy’s relocation to Los Angeles is a timely one when taking into account the legacies of slavery, the Jim Crow era, and the economic desperation many faced. Putting these realities in conversation with what it means to be part of a diaspora or to be a migrant within a country provides a strong framework to situate his artistic practice. Historically, within the European context, there is a familiarity with the white European migrant becoming American, but not with Black America embodying a history of migration in itself.  Los Angeles holds this history of complexity that is on par with these trajectories of movement and travel. Thinking back to my earlier writing on Mark Bradford, Khalil Joseph, Marlon Riggs and Lynnee Denise’s poignant reflections on the ‘80s in Los Angeles, the relationship between the Watts Riots, the 1992 riots, and patterns and influences of migration through sound and art become ever so clear.

Seeing Purifoy within the walls of the museum space and experiencing the installations in the desert brings a whole new life to his work. The desert pieces can clearly not be confined in the museum space; they feel lost and out of context without the immense desert surroundings. Walking around looking at the detail of spiritual altars and ornaments in contrast with withered assembled junk stretched out in between the installations is telling of his approach to phenomenology. The natural landscape and rough terrain that the art works are situated in are testament to Purifoy’s exploration of phenomenology; the embodied experience of spatiality and temporality. In his approach he offers a different framework to negotiate and explore the meaning of a Black experience without the constrictions that are so often placed on “Blackness.”

There is a certain pressure and tendency to place work made by Black artists under the category of “Black arts,” which, as many have pointed out, brings up complicated questions around authenticity. Purifoy made clear his work should not be seen as merely protest art. What Purifoy offers, however, is a place to negotiate his art works transcending protest art as well as a critical engagement with the different realities he inhabited. 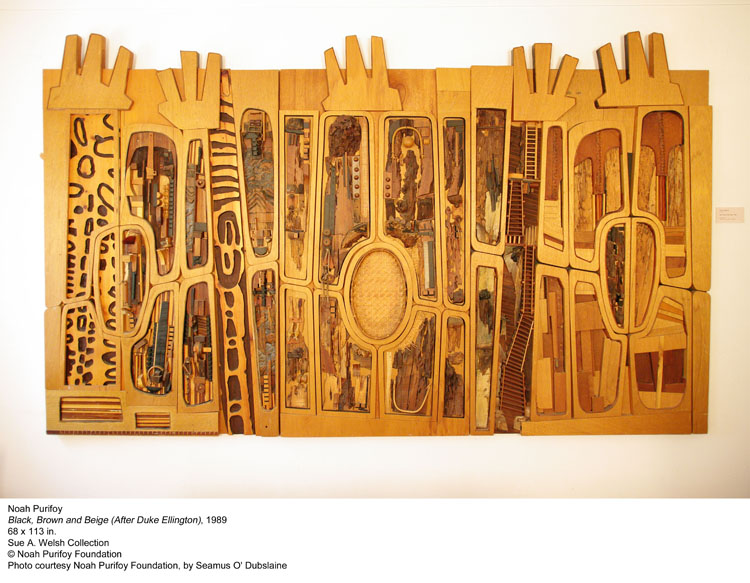 Purifoy makes explicit reference to James Baldwin, Nina Simone and Duke Ellington. In his 1995 Desert Tombstone Series entitled The Fire Next Time I, II, and III (After James Baldwin) he invokes the significance of the Black American cultural and artistic movement. Similarly, Purifoy titled one of his works Rags and Old Iron II (After Nina Simone). With pieces like Zulu, Purifoy draws on a deep spiritual and ancestral connection inherent in his work. His work can be placed firmly in the Deep South but also within a transnational context.

Purifoy's approach to phenomenology, including his self-imposed poverty, led to an ongoing artistic dialogue about how visual art functions within the social realm. Influenced by Heidegger, Husserl and Freud, Purifoy experimented with "psychological overtones." But when questioned if the use of the shoe in his work was a Freudian symbolism, Purifoy would simply explain that the shoe is a Black man’s fetish rooted in his rural US background [1]. I believe these exchanges make Purifoy’s work so poignant. Instead of seeing his engagement with Freud as conflicting or contradictory, we can understand these engagements to be part of the foundational layers of Purifoy’s phenomenology which add to conversations about the invaluable legacy of his work.

Purifoy fled the hostilities of segregated Alabama and found community in Watts where he encountered other forms of racial and economic oppression. His work calls into question the myth of the seemingly racially-liberated West coast and serves as a testament to some of the radical ways that he dealt with materialism. The flames of Watts inspired an important artistic movement that transcended the riots and resulted in the making of assemblage art that references political frameworks but is not constricted by them.

Chandra Frank is an independent curator, writer and PhD Candidate at Goldsmiths College in London. She is interested in feminism, race, heritage, resistance and the role of the archive. Find her at http://www.chandrafrank.com