From the Turkish side of the border I could hear the low rumblings of explosions, the sound rolling across the northern Aleppo countryside. I was left to imagine the ear shattering impact, the soul splitting screams of the survivors, the wounded, or those who were forced to watch their loved ones die.

This is why people flee.

The week before I was on the Greek island of Lesbos, where, despite the winter weather, rubber dinghy after rubber dinghy continued to arrive.

Dozens had drowned in the few days we were on the island, many of them children. The images of their tiny lifeless bodies lying among the rocky shores of Turkey’s beaches mirrored that of Aylan Kurdi’s over the summer.

But death – whether in the warzone or in the water - is the norm, hardly generating shock and outrage anymore, hardly galvanizing those who can arguably initiate an end to the suffering to do so. And perhaps among the most difficult thing for me to come to terms with is the fact that most of the rest of the world seems to be anesthetized to the suffocating sorrow it generates.

Europe, no longer able to ignore the tragedy, is building physical and psychological barriers in a vain attempt to stop people from coming. I was in Hungary as a child chasing a ball fell into thick coils of concertina wire. I was in Denmark when they passed what has been coined the “jewelry law” which, yes, is about the seizure of valuables and money, but most impactful when it comes to lesser-known provisions that delay the reunification of families to three years. A young Syrian mother who had made the trip to Europe alone sobbed as she showed us a picture of her little girl, overwhelmed by the reality that the next time she’ll see her daughter, she will likely be in her teens.

Powers like America, Russia, Iran, the Gulf and Turkey back their proxies in various multi-layered, complex battlefields spanning across the Middle East and beyond. Various leaders vocalize their horror. The UN regularly expresses deep concern. All this has done little to end the fighting. And we, the press corps, scream into a dark void in an attempt to appeal to humanity.

My need to do something tangible started back in Iraq in August 2007. A little boy named Youssif sat in the kitchen of CNN’s Baghdad bureau, shoving one grain of rice into his mouth at a time. Masked men had doused him in gasoline and set him on fire. His entire face was covered in hard rivers of scar tissue. He was sullen, quiet and angry.

His parents were beyond desperate. They just wanted their son back, to see that spark in his eyes, to see him smile again. His father, Wissam, had pounded the pavement for months looking for help, going from ministry to ministry, hospital to hospital. By chance, a friend who worked close to our bureau mentioned CNN and he appeared at our door. I remember I was running up the stairs to do a liveshot when our producer, Mohammed, grabbed me and said, “Arwa, look at this boy, we have to do something.”

We reported Youssif’s story on CNN and the response was overwhelming - an outpouring of support that transcended race, religion, ethnicity, and came from across the globe. The Children's Burn Foundation in Los Angeles came forward to take on the case. CNN viewers donated hundreds of thousands of dollars. The best moment of my career was when I was able to call his parents and tell them their little boy would be getting help. One of the few times I have smiled on air is when I reported that to our viewers.

And for me, it also reminded me that the kindness of strangers exists and generated the first thoughts about starting a non-profit that might tap into that generosity and build the links needed to help in cases like Youssif’s. 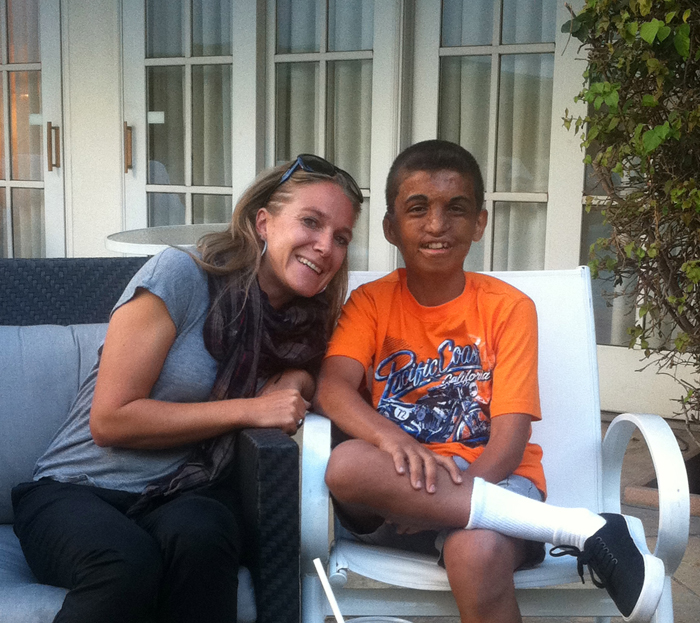 The author with Youssif in Los Angeles several years after his surgery.

As the region grew more violent, I found myself as a journalist feeling more and more helpless. Nothing we did or reported or risked was altering the disastrous violence that was ripping through the nations.

INARA establishes links between injured children and their families and much needed medical support in cases of life threatening or life altering injuries.

We have found that parents are often at a loss in terms of simply knowing where to go to help their children. At times, the assistance they need already exists, so we refer them to the right organization and help them navigate the system.

And when the issues are not merely logistical, we tap into our network of doctors, medical facilities and other support systems to get them the treatment they need. Each case has a dedicated caseworker.

We have a small, core team - medical residents who donate their time, doctors who perform surgeries pro bono, discounts at hospitals, companies that have provided us with anything from free business cards to free dental implants in one of our cases. We have built a network with the other international and local non profits in Lebanon, and have a growing community of individuals who donate.

We started working in Lebanon because it’s where I already had a pre-existing network, but also because there is a massive need there for the type of niche work that INARA does. We have taken on cases in which a girl’s genitals were burnt in a bomb; a little boy whose face was melted by an explosion; a baby suffering from septic wounds after a botched burn surgery.

Currently we are focusing on providing medical assistance to children from Syria, including Palestinians, the group in greatest need. As we get more funding, we will expand, and harbor hopes of one day working globally.

Back in 2007, I travelled with Youssif and his family to Los Angeles. It was there, on a trip to the beach before his first surgery, that I first saw the little boy that his parents so dreadfully missed. I laughed amid his shrieks of joy at seeing the ocean for the first time, built his first sandcastle with him and hugged his mother as she cried.

When I talked to Youssif last year, he still wanted to be a doctor, to help burn victims like himself. One of our current INARA cases, Ala’a, a teenage girl whose jaw was blown off in Syria, wants to be a nurse. Adnan, paralyzed from the waist down, has a beautiful eye for photography wants to be an engineer. Fatima just had her first surgery and is at the start of a long and painful journey that will restore the use of her hands, which were lost when a blast hit her home. She wants to teach children Arabic.

By not turning our backs on the most vulnerable victims of war, by showing them kindness and compassion rather than rejection and barricades in instances where it feels like humanity has failed itself, we are not just impacting their lives, but the lives of those around them in ways that extend from today into the future.

Arwa Damon is a senior international correspondent for CNN, based in the network's Istanbul bureau. A recipient of the International Women's Media Foundation's 2014 Courage in Journalism Award, Damon is one of the network's Middle East specialists. Her coverage has latterly focused on the fierce fighting in Iraq between militant Islamist group ISIS and the Iraqi national army and associated Shia militia groups. Damon has also covered extensively the bloody civil war in Syria and the deepening humanitarian crisis which has spread across the region in its wake. Her reports have focused on -- amongst other subjects - the effect of devastating 'barrel bombs' air raids on the civilian population of Aleppo and moves by Turkish security forces to reinforce the country's historically porous border with Syria. Damon began her career at CNN in the network's Baghdad bureau. She was based in Iraq from 2003-2010, covering a number of landmark stories from Iraq including the deadly battle for Fallujah, the trial and execution of Saddam Hussein and the country's first national elections following the toppling of the Ba'ath regime. Twitter @arwaCNN

Literature by Abdi Aden Abdi,
Dadaab Corona Notebooks
Opinion by Laura Kasinof
Yemen's Change Square, Ten Years On
blog by Warscapes
Ethiopia: Urgent Call and Appeal for Peace
Reviews by Sneha Khaund
The Personal is Political in Assam's Insurgency
blog by Warscapes
Open Call: The Corona Notebooks
Poetry by Susan Nalugwa Kiguli
To War Mongers Everywhere
Opinion by Jehan Bseiso
Skyping with Medics in Syria
Reportage by Preethi Nallu
Empower a woman, empower an eco-system
blog by William D. Hartung
Merger Mania: The Military-Industrial Complex on Steroids
Opinion by Jehan Bseiso
No Search, No Rescue: Support and Empathy is a Radical Action
Like any of the articles? Support our work.
Donate Now