In the five years since the Syrian Revolution began, the country has endured a multi-faceted conflict and a massive humanitarian crisis. Peaceful public demonstrations in Syria initially carried on but later declined after the Assad regime’s increased use of barrel bombs and indiscriminate air strikes on civilians in 2012. In September 2014, the US International Air Coalition against ISIS began flying over Syrian airspace, consequently killing hundreds of civilians in their attacks on ISIS. A year later, Russia began flying over Syria in an effort to “combat ISIS terrorists,” though reports largely indicate Russia attacking schools, hospitals, and Aleppo, where ISIS is not present. Though demonstrations continued, the presence of the Syrian nonviolent movement was mostly pushed into private and digital-public spaces in order to remain alive. Many activists had to make the journey across Syria’s borders for the chance to continue working publicly, joining the refugee crisis that has politicized the West. Others, bound by the walls of siege, continued their work within Syria.

Meanwhile, seven UNSC resolutions on Syria regarding the use of barrel bombs, starvation sieges, political prisoners, chemical weapons, and access to humanitarian aid began to pile up, unenforced. The eighth one, resolution 2254, was adopted on December 18th, 2015, stating that the implementation of a ceasefire is necessarily linked to a Syrian-led political transition that reflects the aspirations of the Syrian people, as referenced in the 2012 Geneva communique. The International Syria Support Group (ISSG) then came out with terms for the ceasefire called “Cessation of Hostilities in Syria,” which were adopted on February 22nd, 2016 by the ISSG’s co-chairs, the United States and Russia.

The goals of this document are four-fold: to implement the Munich Statement from Feb. 11th, to implement UNSC resolution 2254, to implement the 2015 Vienna statements, and to implement the 2012 Geneva Communique. The terms of ceasefire apply to the Syrian regime and its supporting militaries (Iran, Russia, Hezbollah) and the Syrian armed opposition. The ceasefire explicitly excludes military or paramilitary activities against ISIS, Jabhat al-Nusra, and other UN-designated terrorist organizations. The actual terms for both the Syrian regime and its supporting militaries and the Syrian armed opposition are almost identical, except that the Syrian regime is prohibited from using barrel bombs and performing other aerial military operations. To enforce the terms, the ISSG set up a Ceasefire Taskforce co-chaired by the United States and Russia, who are responsible for four points: delineating territory held by Daesh, Nusra, and other terrorists, ensuring communications among all parties, resolving allegations of non-compliance, and referring persistent non-compliant behavior for action.

The ceasefire went into effect at midnight in Damascus on February 27th, 2016.

And then, the sound of birds singing, as one member of the Syria Civil Defence reported. And with an official ceasefire calming the usual torrent of aerial attacks to a drizzle, protests bloomed across the country in the form of white banners from the south in Daraa to the suburbs of Homs and Damascus, across the entire province of Idleb, to the ancient city of Aleppo. Syrians danced at World Heritage sites, showed up with their posters, and chanted in unison calling for the removal of the Assad regime and justice for the entire country. Each weekly protest in the Syrian revolution was given a theme, chosen by popular vote. This past week’s theme was: “The Revolution Continues.”

104 peaceful protests were reportedly recorded across the country within a week that the ceasefire took effect, and are currently being archived. Some were from besieged areas, like this photo (posted by prominent Syrian human rights activist Marcell Shehwaro on her Facebook) from besieged Saqba showing a man holding a sign that says “Revolution is an idea, and ideas cannot be killed.” 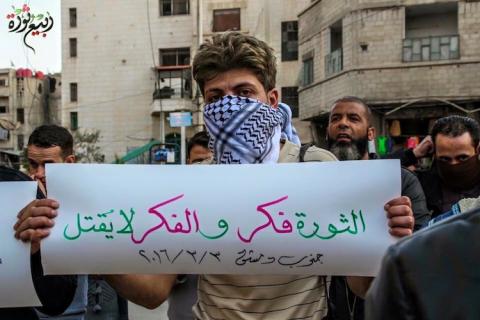 Other photos came from Maarat Nouman, an area that has had its hospitals, schools, and bakeries destroyed by airstrikes from Syrian and Russian warplanes. Last March after the UNSC passed resolution 2209 condemning the use of weaponized chlorine in Syria, Maarat Nouman was one of the places repeatedly hit by chlorine-filled barrel bombs.

A year later, Maarat Nouman is now the congregating point for a demonstration that represents the entire province of Idleb. An English-language banner reads, “A Ceasefire Is a Ceasefire; Our Peaceful Revolution is Still in Progress Until Toppling Assad and Imposing Justice All Over Syria.”

And in besieged Douma, journalist and activist Firas Abdullah uploaded this video from their demonstration that day, which shows Abdallah speaking to the camera in English. “We are here to confirm the principles our revolution, the Syrian Revolution: freedom and justice and dignity. We will never give up as far as we can still breathe,” Abdallah says.

And another powerful poster from Aleppo shows a list of years crossed out on a poster board, with “And we still want freedom” written in Arabic at the bottom.

The following week’s protests started out in besieged Daraya, with calls from civilians to oust Assad in order to break the siege. One smiling girl holds a sign that says, “Get rid of Bashar to get rid of the siege,” while a video from that protest shows civilians making a human sign that says “SOS.”

Friday, March 11th’s demonstrations were held under the theme “Renewing Our Vows.”

One notable point about the protests thus far are the clashes between pro Revolution demonstrations and Al Nusra fighters. Today a video was released on youtube of a pro revolution protest in Maarat Nouman as a group of Nusra fighters tried to overtake the demonstration. Instead, revolutionaries chanted loudly to drown out Al Nusra. “One One One, the Syrian People Are One!”

As for compliance with the ceasefire, monitors have already reported violations within the first 24 hours. The ISSG’s own violations hotline has come under criticism for hiring operators who are not fluent in Arabic and has yet to make a statement on breaches of the ceasefire.

Some of these violations include multiple accounts of regime shelling, attacks on residential towns with machine guns, and the taking of political prisoners, while ISSG co-chair Russia reportedly carried out aerial attacks, including shelling the town of Hama. The Syrian armed opposition has attacked a regime base in Daraa and launched rockets into a neighborhood in Aleppo.

Looking at this ceasefire, there is reason to be skeptical of the means by which the ISSG plans to ensure compliance. For example, despite reports of violations from Russia, the ISSG has yet to report an official violation. The integrity of the Ceasefire Taskforce is in question because of its fox-guarding-the-henhouse model: it’s unlikely that Russia will actually concede to its own air force violating the ceasefire terms that it mapped out.

What is more remarkable, however, is Syria’s civil society, who are deeply politicized bodies in a theater that is more able to recognize and respond to privately armed terrorist groups than it is to state-sanctioned extermination and war crimes. They are a central part of the conflict and a resolution cannot be achieved without meeting their demands—not only as a matter of principle, but as a matter of practical implementation. Until then, the revolution continues.

Shiyam Galyon is a Syrian-American writer and researcher based in Houston, Texas. She attended UT Austin where she was active in Texas 4000 for Cancer, Students Against Sweatshops, and Palestine Solidarity Committee before graduating with a B.S. in Biology. Shiyam worked on a humanitarian relief trip in Idlib and Aleppo with the Syrian American Council in 2013, and is the former President of the Houston Chapter. She tweets @ShiyamG.

Cover photo: Alaa Al-Faqir/Reuters. A protester waves an opposition flag as he takes part in an anti-government protest in the southern Syrian town of Bosra al-Sham.

Opinion by Steven Herran
Between Eggs and Shells: On Street Protests in Colombia
Poetry by Mona Kareem
The Final Hours of a Statue
Opinion by Jehan Bseiso
Skyping with Medics in Syria
Reportage by Preethi Nallu
Empower a woman, empower an eco-system
Reportage by Ahmed Hezam
Dispatch from Yemen
blog by Inshah Malik
Dispatch from Tehran
Art by Melissa Rodriguez
Art becomes therapeutic for refugees
Reviews by Andrew Ryder
Nicaragua’s Revolutionary Moment
Reportage by Betsy Joles
City Beyond Refuge: Journeys Suspended in Istanbul
Poetry by Andy Young
Two Poems
Like any of the articles? Support our work.
Donate Now