An exemplar image of what I am about to say appears thus. Kashmiri men, some are running and some climbing on an armored truck, which holds the Indian paramilitary forces. It appears that after a pitched street battle the military truck has been cornered by a handful of demonstrators, un-armed except for occasional sticks and stones. The bodies of these youth are synced in a fatal intimacy with the vehicle. The soldiers are armed to teeth, and at any point can shoot them down. In the last three-month almost every day has been a funeral in Kashmir; young boys, men, girls, women and children have fallen prey to Indian forces. These men around the vehicle do not care for being killed, or even being wounded or maimed for life. India continues to quell the protests that started on July 7 after Burhan Wani, a young popular militant was killed by government forces. Eventually a long summer uprising began, full of reinvigorated calls for self-determination and independence. The image of the Kashmiri youth swarming around the armored vehicle is only an increment on the iconic grassroots resistance that all Kashmiris have expressed increasingly since 2008. The Indian response has been its stock-in-trade disproportionate and fatal force.

But this summer has made one thing amply clear: it is the end of fear in Kashmir.

If we only take the last 126 days Kashmiris have lost too much; 100 bodies, and counting; more than 10000 wounded, organs perforated that include 1100+ eye injuries or blindings due to pellet-shot guns. The 3 month long curfew, even though lifted continues off and on. The valley is an 'open prison'; a term that Kashmiris use to define their homeland. The images of the raw viscerality of the Kashmiri resistance are online as well (if you care to google it.) One would imagine that civilians would observe a diffidence around soldiers, but it is not so in Kashmir. Fear of being killed is gone, so is the fear of being maimed for life. Kashmiris are demanding the right to self-determination in a hand-to-hand street combat.The three decades of intense militarization has made facing danger a second nature to Kashmiris. They have buried and lost too many they say. The hospitals across Kashmir are full of wounded, both protestors and those who were not even part of the demonstrations. The grotesque violence, which was being reported mostly by local newspapers despite curbs on media, depicted the horrors of an undeclared war on civilians. Kashmir Reader, a newspaper known for its in-depth news stays banned for its raw investigative reporting.

Not only men, but Kashmiri women have increasingly joined the protests and street battles. Such has been the level of their participation that a local pro-India politician even used it as an excuse. He said that women were organizing after they were done with domestic chores, which made night curfew imperative. Talk about multitasking between the home, and nation! This is the constitution of the crowd on the streets of Kashmir. Yet the Indian government adamantly portrays the demonstrators as hired hands, criminals, unemployed, drugs addicts or unruly kids. No amount of evidence or denouncement of this allegation from the Kashmiris allays the Indian narrative; most simply because it does not suit their political ends. GoI continues to undermine all modes of Kashmiri resistance with two old bottles of snake oil: one has "Pakistan instigated" written all over it and the other peddles the Kashmiri movement as "political disenchantment." Global community may not hear of Kashmiri movement as an "uprising" but as a mere "unrest", or even "terrorism" because that helps India to misrepresent the demand for self-determination. But all this should fall hollow in what Kashmiris have made the world witness these past few months. They have given a crystal clear message: their fight is not for reparations or lifting laws like AFSPA (Armed Forces Special Powers Act) but they want the right to exist as an Independent country. Sample this: Two Kashmiri boys with bandages on their left eye are lying on a hospital bed in Srinagar. When the boys were asked if they would again protest they promptly reply, "why not, we still have one eye left."

Recently the United Hurriyet leaders met to decide the future course of the movement. Thousands of common Kashmiris thronged the venue to make sure the uprising continued through a "hartal" (civilian curfew), a historical mode of civil disobedience observed by Kashmiris. Often debated as economically and socially unviable, for now hartal seems to be the only option through which majority of the Kashmiris can participate in the civil disobedience movement without resorting to street protests. Everyday life including schools, trade, supplies are shaping around the boycott while the street battles are ebbing and flowing. Kashmiris have re-readied for a long resistance to India which politically and culturally has been a part of their life anyway. 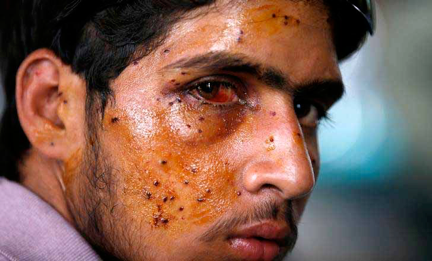 The 2016 mass uprising will be remembered for iconizing the figure of a Kashmiri fighting for freedom. Chest heaving, daring the Indian troops; it may or may not have a stone in hand, and most possibly might be blind in one or both eyes – if nothing the eyes will be bloodshot indicating gas, or a recent injury. 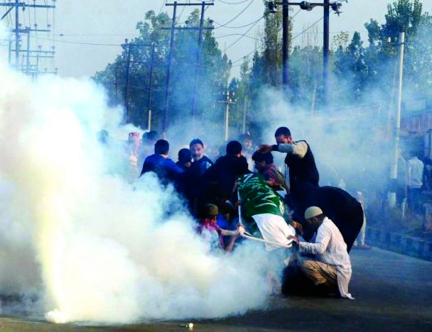 Firing on a funeral of a boy wounded by Indian retaliation, and later succumbed (photo credit: Kashmir Life)

Meanwhile, the GoI continues to perfect its technology of terror. After introducing stronger PAVA gas that turned Kashmiri streets and homes into gas chambers, now the government is toying with the idea of shock sticks. The continued use of pellet guns has resulted in mass blindings, bodies perforated beyond repair and defacement. These injuries are beyond the realm of routine war injuries, and as a mass punishment ensures people become physically and emotionally incapacitated for life. This summer also witnessed India upping the ante on bodies of those killed. To quell the funeral protests firing on mourners began to seem commonplace. Somewhere the coffins fell as people took shelter from the fire; elsewhere with men dispersed women rushed to catch the corpse; a practice which is seen as the epitome of pain and powerlessness." There is nothing more left to see now; we are in Karbala," says one Kashmiri woman. A Kashmiri man adds, "There is little to lose; it is do or die; no more fear?"

Thus, as India continues perfecting its technology of terror; for Kashmiris the end of fear has come to stay.

Ather Zia is an anthropologist, poet and faculty at the Anthropology Department and Gender Studies Program at University of Northern Colorado. She is the founder-editor of Kashmir Lit, a journal based on writings on Kashmir at www.kashmirlit.org. Find some of her recent blogs on Huffington Post at http://www.huffingtonpost.in/ather-zia/ Twitter at @aziakashmir