This past October, as the commercial art world converged on Frieze, the second edition of the 1:54 Contemporary African Art Fair opened in London. With 27 galleries exhibiting over 100 artists, this year’s fair highlighted the increasing market interest in contemporary art from Africa and the Diaspora.

The talk focused on the possibilities for an African artistic canon, whose development is underscored by the historic exclusion of African art from Western art history, galleries and publications. Introducing the panel, Kouoh highlighted the seminal role of Revue Noire in challenging received ideas of contemporary African art up until the early 90s. However, she also emphasised the need to situate artistic practice―including that of Konaté and Camp―in the context of curators, galleries and magazines that form the backbone of canonicity.

The idea of "Africa"

The challenge of defining an African artistic canon quickly prompted a return to the question of "Africa" as a cultural, historic, and political construct. Each speaker spoke to the tension in identifying their work with the continent, especially when localised cultures and identities cannot be generalized.

For Njami, Africa “is constantly invented; there’s no essentiality. I am outside whatever definition. My Africa is a permanent deconstruction of preconceptions.” This comment stresses Njami’s challenge to an essentialist idea of "African-ness"; recounting the role of Revue Noire and his numerous curatorial projects in bringing attention to living artists and their work on the continent.

Camp, whose works often draw from her Kalabari heritage, said, “[Nigeria] is 54 years old. We are just starting to see ourselves as Nigerian….Talking about the continent is like talking about the world.” Kalabari dance and Sekiapu masquerade have permeated the artist’s steel sculpture and film works, which move ordinary life, ritual and living traditions into the realm of the aesthetic. 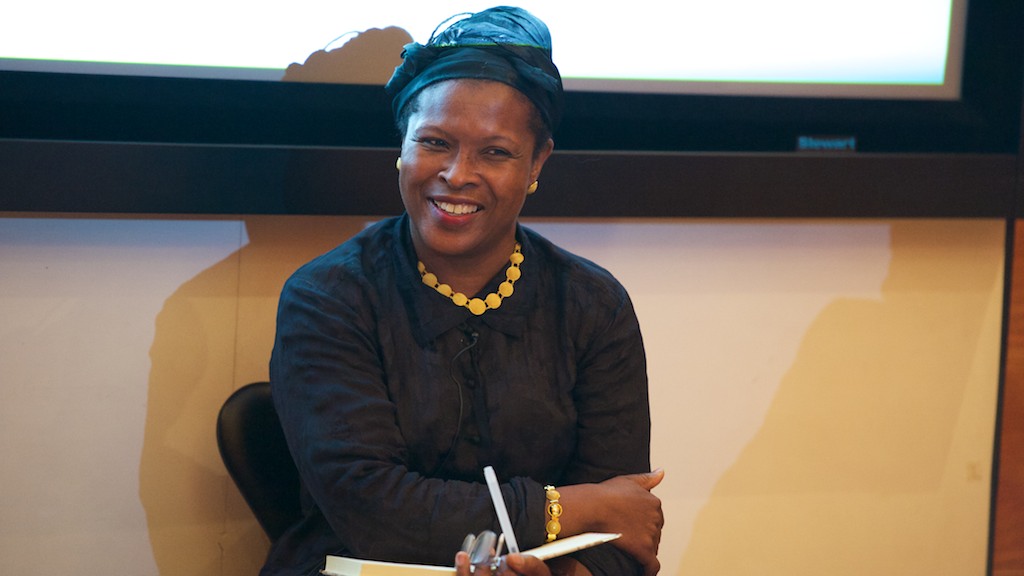 Konaté more fully encapsulated this tension, stating, “[Africa] is a regrouping of spaces containing diversity….It also has a cohesion of culture and a common thread made of cultures, not resources.” Konaté emphasised the incongruence between experiencing oral and familial history on the one hand and studying African cultures through the structures of formal art education. These cultures provide the material inspiration that in turn become a "universal" aspect of African art. For him, the common denominator is human suffering and pleasure.

The idea of "African art"

Both Konaté and Camp are now key figures of this canon, despite having challenged and eluded inclusion throughout their artistic practices. Their careers have outlived and precipitated a change in African art history―from a time where African visual cultures were considered museum ethnography to their current inclusion in art galleries. Their work has educated curators and critics to correct the misunderstanding of African art as tools rather than aesthetic objects.

Njami noted the absence of references for this generation of artists: African artists were not represented at major art gatherings such as Documenta or the Venice Biennale. He emphasised the importance of experiencing different iterations of a so-called canon; recalling the patronizing attitude of curators telling him that the concept of contemporary art did not exist in Africa or that objects were not "African" enough.

Both Camp and Konaté operated beyond these categories with a sense of necessity. They were happy to be included in any exhibition―ethnographic or otherwise―and had never explicitly labelled themselves as "African" artists. “Before my film, I was an artist, not an African artist,” said Camp.

Summarizing this perspective, Konaté stated, “I never had limitations. I didn’t account for people profiling me as an artist. Wherever you go each civilization has created its own culture. Unless you know the culture, you can only classify it if you view it as inferior. This only betrays the lack of knowledge―it will change over time.”

It was not until after Magiciens de la terre in 1989 that art galleries, rather than ethnographic collections, expressed interest in Camp’s art. Njami credits the transformation of the 90s with this Paris exhibition, where curators and major art institutions were made to engage with African artists as thinking subjects and not only in relation to Western artistic traditions.

Africa from the outside

Both artists also gained perspective on the view of Africa as a coherent whole through their education and practice abroad. Camp moved between Nigeria and the UK, where she notes, “the Central School [now Central Saint Martins] encouraged us to explore where we came from.” Camp’s work has since addressed the intertwining of Nigerian and British cultures through referencing cultural iconography in her steel sculptures.

Konaté’s time in Havana as a student under the tutelage of Wifredo Lam and immersed in Afro-Cuban cultures enabled him to distil a view of Africa from the outside. His formal art education led to the creation of an art school in Bamako that combined European techniques and African traditions and histories. “I came back from Cuba with Africa,” he stated matter-of-factly.

In a diversifying art landscape with more galleries and curators specializing in contemporary African art, Njami, Camp and Konaté’s careers exemplify the change in the reception of African and Diaspora artists. Where they once operated parallel to and beyond Western institutions, their work has built and been incorporated into an increasingly visible canon of African visual culture.