"The disaster ruins everything, all the while leaving everything intact.

...Remembrance of the disaster which could be the gentlest want of foresight."
- Maurice Blanchot, The Writing of Disaster

It had been a few weeks since the earthquake. The dusty port town of Léogâne was the epicenter. Nearly every concrete structure in the town was destroyed, 20,000 people had died instantaneously and everything was in disarray. Makeshift homes made of cardboard boxes and sheets were put together in haste to accommodate the living. Streets, pavements and parks soon turned into dwellings and life was lived on the streets. They had run out of place to bury the dead and mass graves had to be dug. The son of the local pastor who made his way to give his people their last rites instead rolled up his sleeves and helped move the dead to their communal graves. “The dead grow heavy with regret as they stay un-buried. That is why they are so heavy,” he said.

People lived in disinterest, detached from disaster, hurrying to make new plans, as they prayed, scavenged and learned to live again. When people’s lives collapsed along with the buildings, they took with them souvenirs of their past. Broken vases, crushed calendars, headless toys and photographs inside cheap plastic albums. Stories grew around these objects, reclaimed from the disaster. They had new meaning and belonged to a pantheon of retrieved objects. In the abrupt absence of twenty thousand who had disappeared, each previous act of normality became the last clutches of mortality. There were stories about last meals, terrible fights, of hasty love making, and broken promises. Memory of the unmemorable was transformed into the meaningful. New meanings and stories were constantly woven into memory. The people they had become in death bore little resemblance to the people they had been in life. 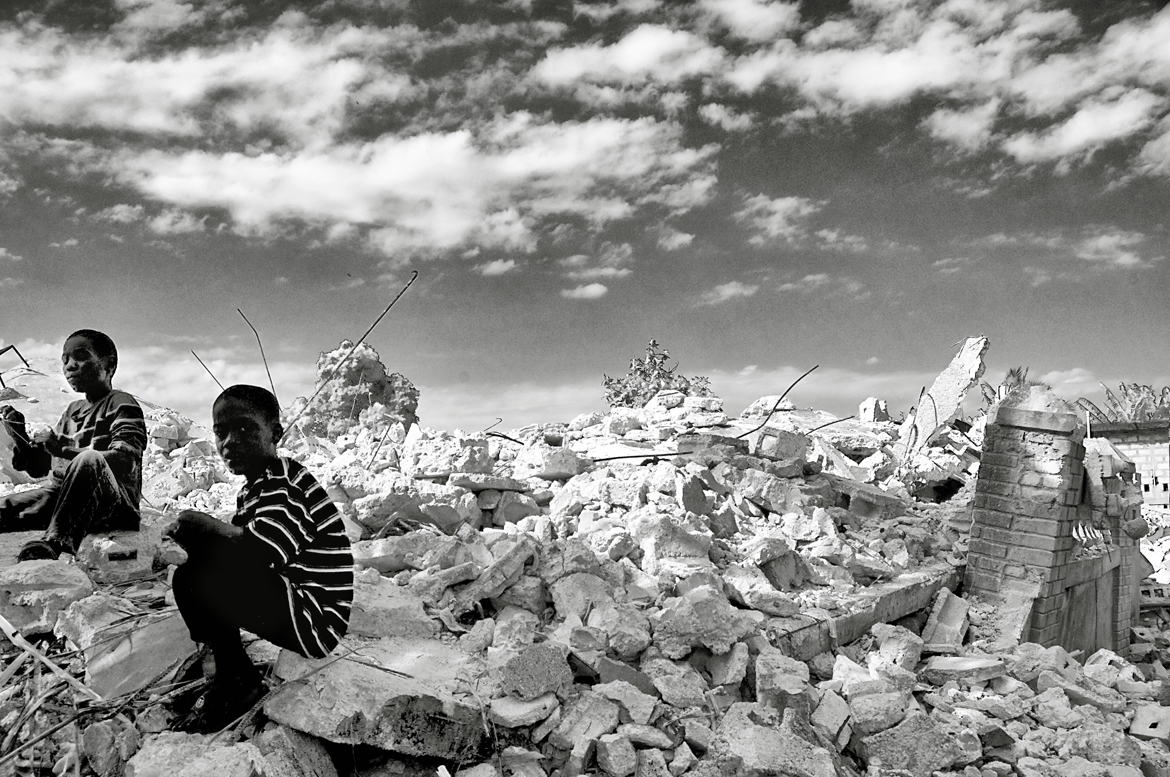 “Do we have a duty to live?” she asked. “What if someone had been willing to die, not like the soldiers who go to fight, but just comfortable with dying…They had no desire to live...What about that…?”  Marylene continued to talk and while she spoke, I quickly wrote her question down, with Marilyn's name and date next to it.

“Do we have a duty to live?” she asked again.

“I don’t know,” I said. I had not thought about such a scenario. My own visual senses were jammed with stories of survival and resilience of the Haitian people. A deep desire to live, perhaps not an obligation to stay alive.

Marylene said that she had asked her Pastor, who had expended all his energy in not listening to her. He had not understood her question.

“No. It was question,” I told her. “A very good one and very difficult one.”

Just that people can never answer such questions without taking a sledgehammer to their beliefs and not walk out of it with dignified sanity.

Marylene, unlike others I had met, refused to talk about herself. Other Haitians I had met told stories about their lives before and after the earthquake. I would often walk away knowing their entire history. Marylene’s personal life was vague. I never got a story, or answers to my questions, just random facts that I had to piece together. Instead she assumed the role of an interlocutor between her damaged town and an unlikely outsider. She spoke continuously about the surroundings. She presented facts about old colonial churches, the shortest way to the ocean, how many times a day the Canadians patrolled the main street and where the aid workers drank their beer.

As we strolled, she asked if I wanted to join her for a prayer meeting. God was a distant figure, and the church she had gone to since she was child was gone, but she said she went to prayer meetings that had started taking place in open lots so that she could sing. She always loved singing. “I sing to cry without tears.” When things went bad, people poured their fear into prayers; it was not salvation, it was an escape. 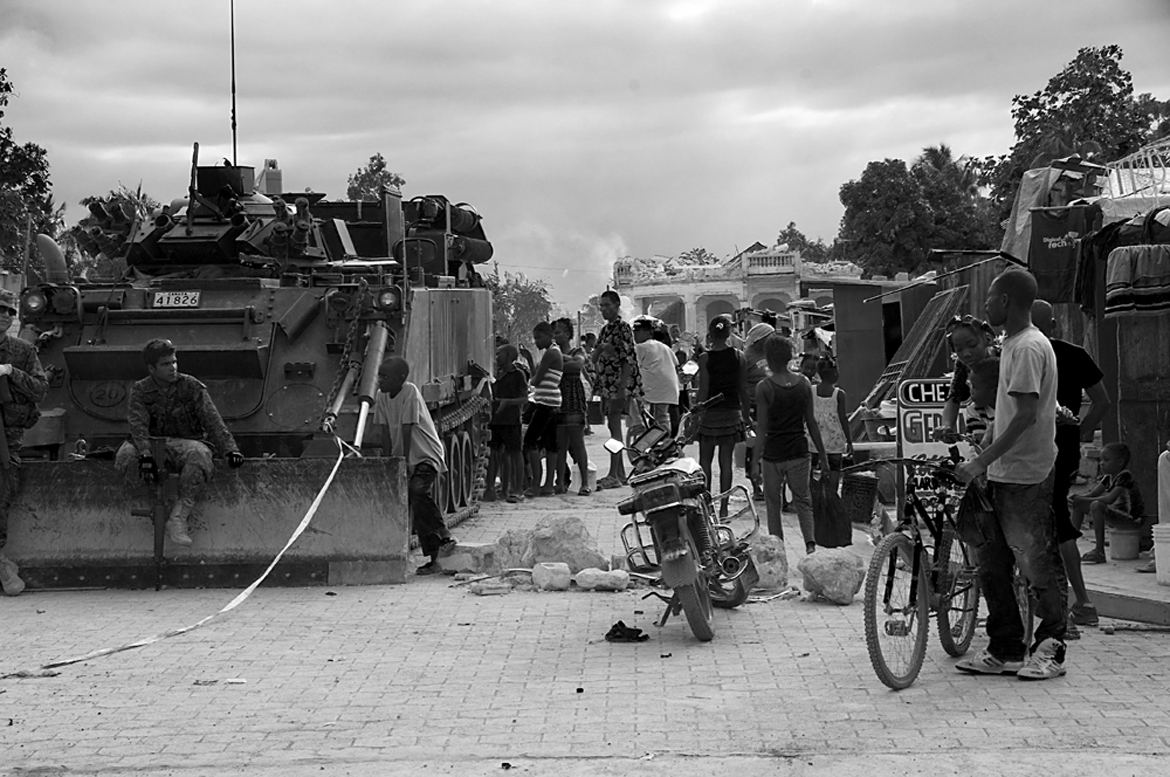 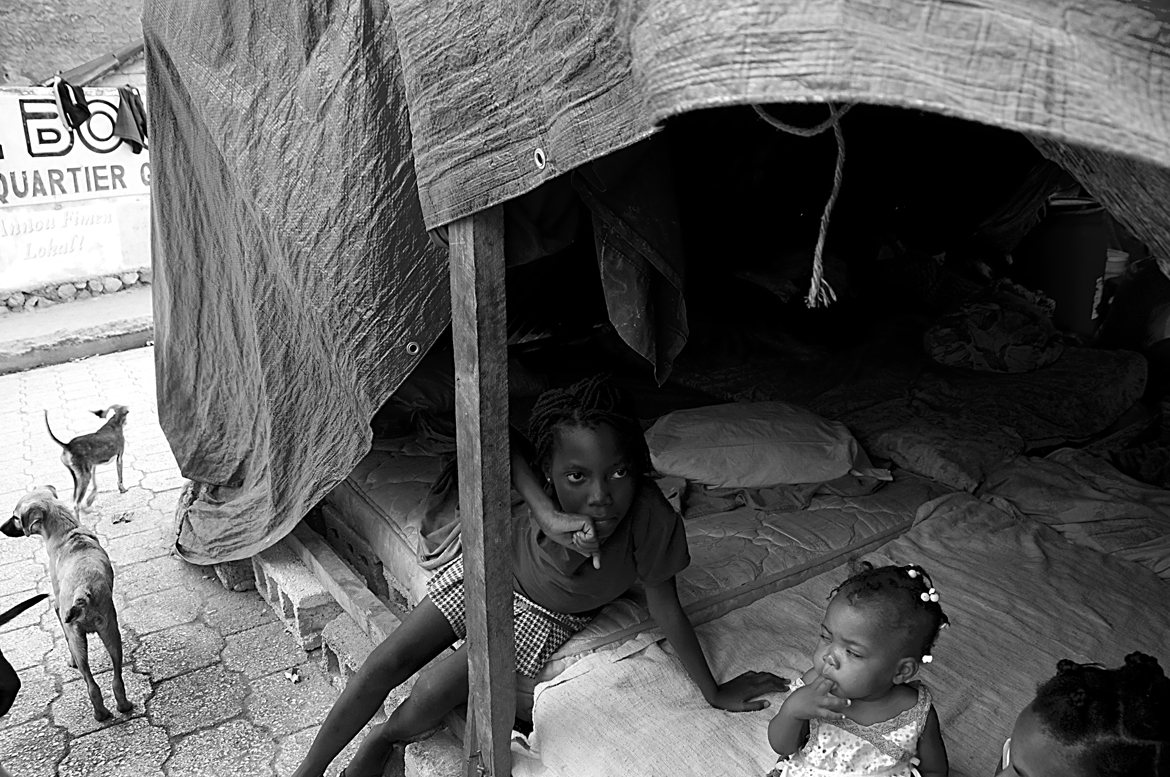 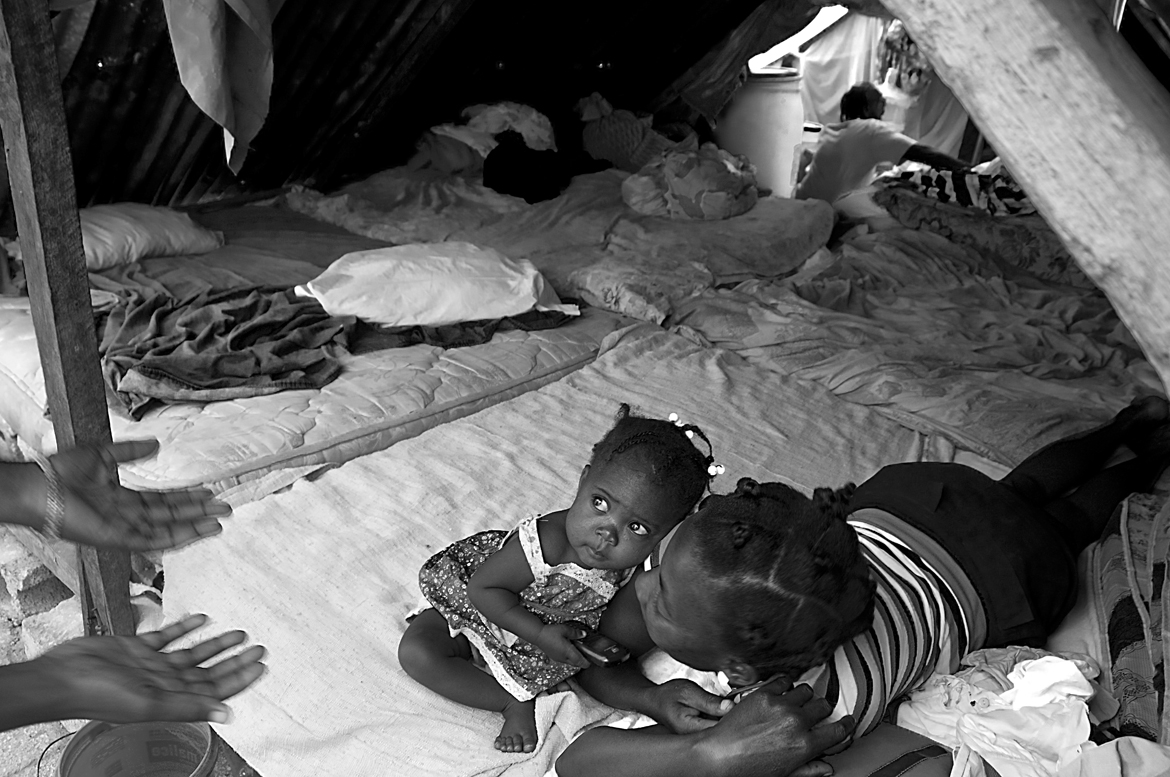 I said I would join her and we walked towards the other side of town and passed more  makeshift homes before we reached her place. We walked past injured in pain laying in their tarp homes, their families sitting around in apathy. She pointed to a middle aged women sitting outside her temporary shelter. “She is just waiting for him die. The doctors said they can't do much, gave him medicine for pain. He is clinging on to life and she is waiting for him to go.” Pointing to other homes as we walked by: “They are too sick to make it to MSF,” she said. “Many had died of fever after wound infections”.

We finally made it to her new home made of tin and tarp. She had salvaged a mattress and had a few utensils around. On her tin door hung a small piece of a larger broken mirror. Right next to it was a small cheap purple lipstick and a small plastic box that said Ponds Cold Cream. She stepped out with her water canteen, washed her face, came back and applied her purple lipstick. She said it was from Port au Prince, she had gotten it when she was there last with her family. I looked around and there were no signs of a family, expect of two other women she lived with.

On our way back, she pointed to distant rubble of yellow walls and said that her family was still entombed in the rubble of their home. “No one came to help,” she said, and then added, ”I can’t stand the stench anymore.”

“Many are buried like this”, she said with indifference.

Then, only seconds later she waved to a Canadian soldier patrolling the street. He waved back in recognition. “The soldiers are protecting us”, she said, and then quickly moved on to something else, while I was still taken by the information of her family trapped inside. Her purple lipstick was still fresh. It bothered me and distracted me at once. I had expected a certain despondence, bereavement and morsels of hope, not bright purple lipstick.

Unable to broach the subject, I began a long disingenuous sermon on hope. I told her that things would get better.

How slow life is
And how violent hope is.

Marylene went quiet and cold. I had bullied her into a brief silence and she refused to be made into a victim. After this, Marylene didn't say much. In the end it was not her garrulous prose, but the deafening silence that I remembered the most.

"Hope is not violent. Hope is insufficient…” Marylene said with her beautiful angry eye. She paused and spoke in a hushed voice. “Do I have to be hopeful to make you feel less guilty? To make you comfortable with the Hell I call home”. 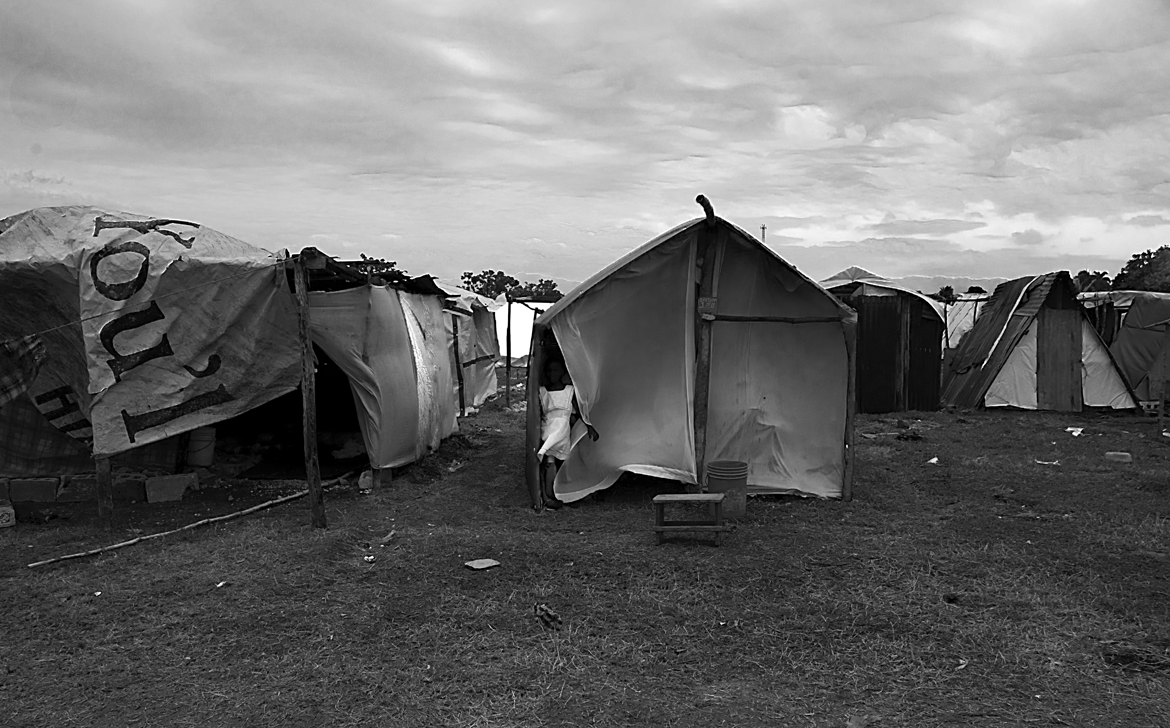 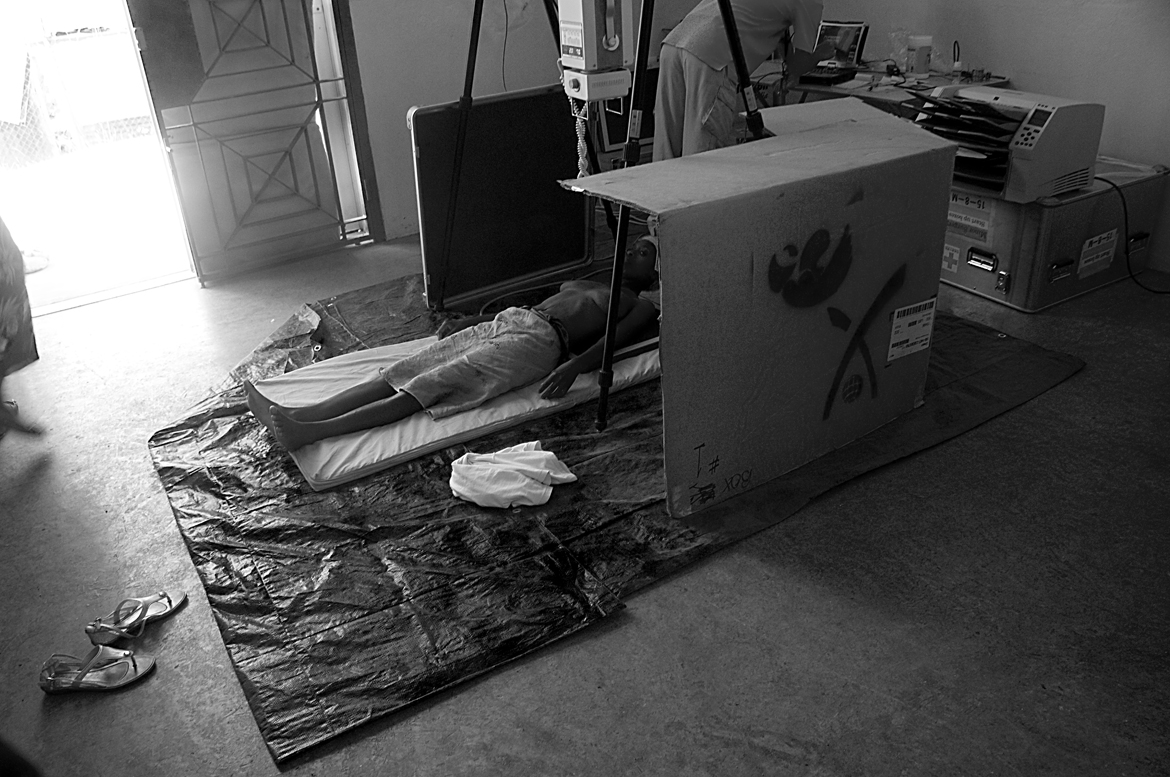 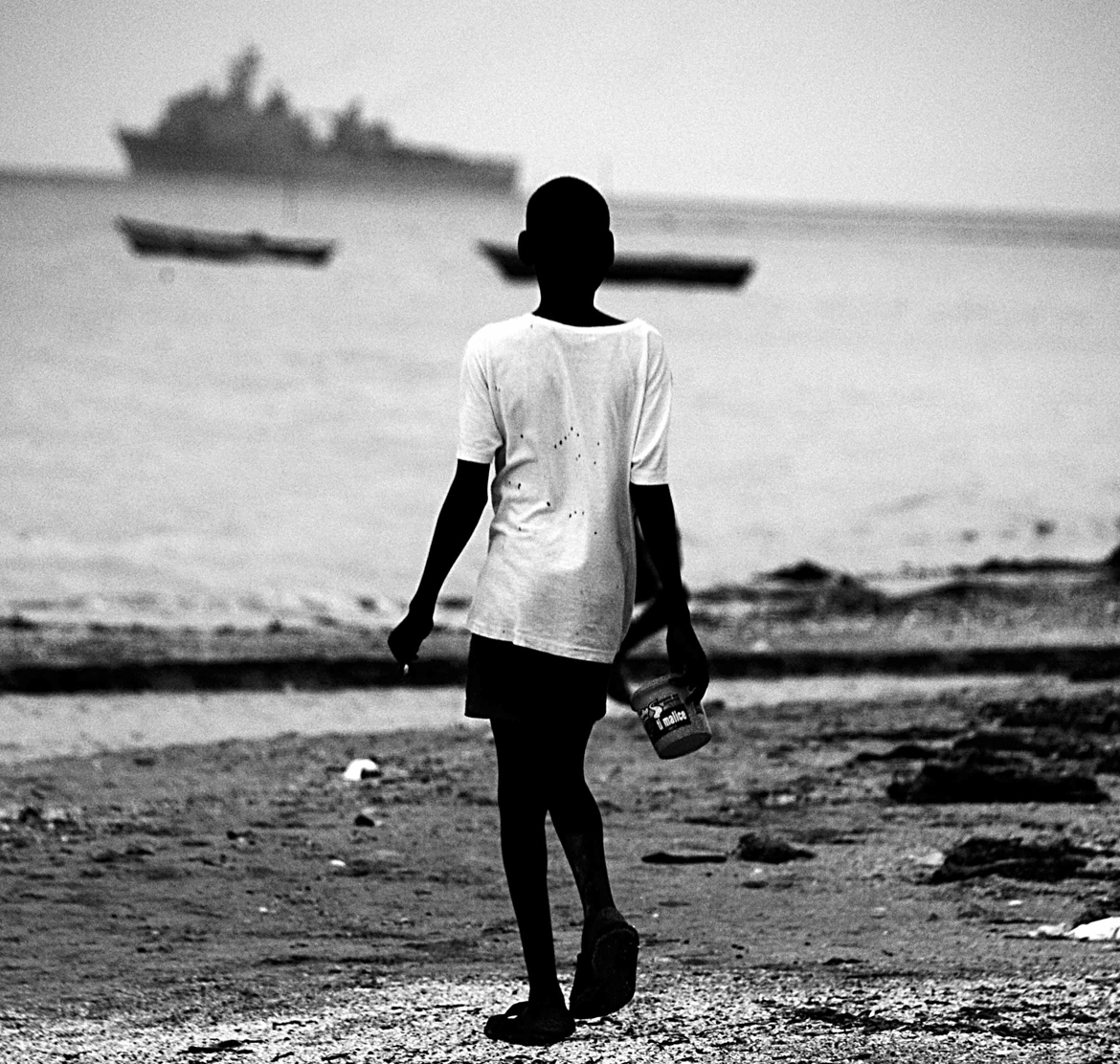 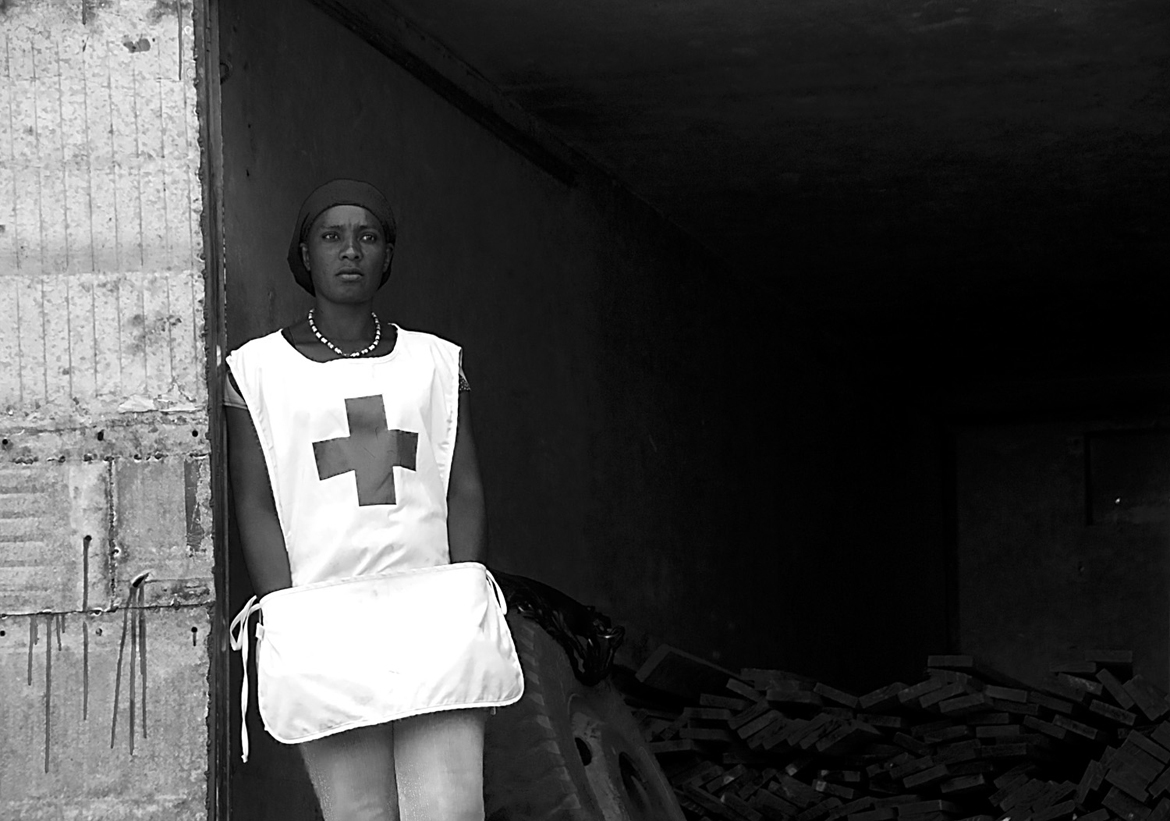 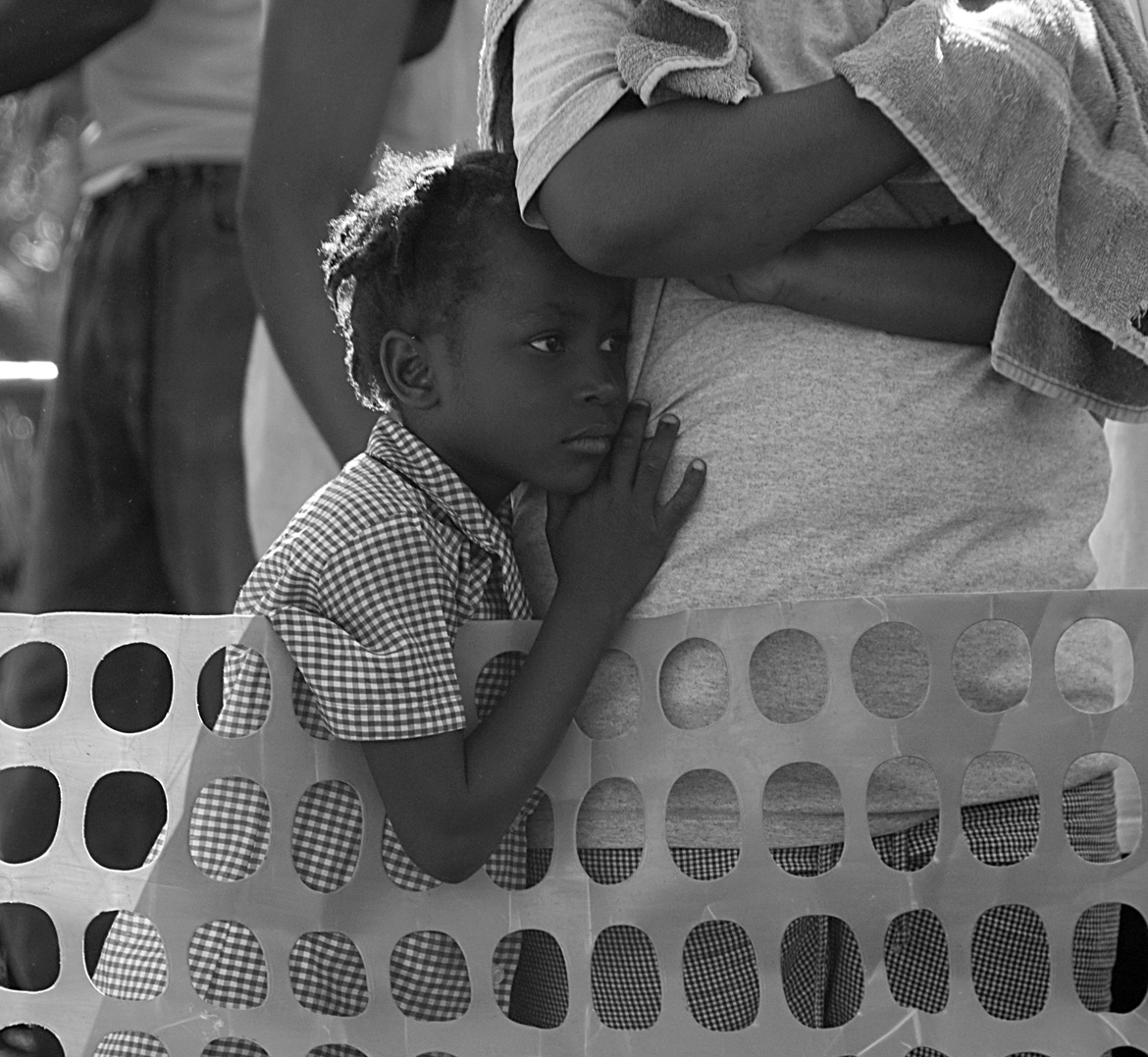 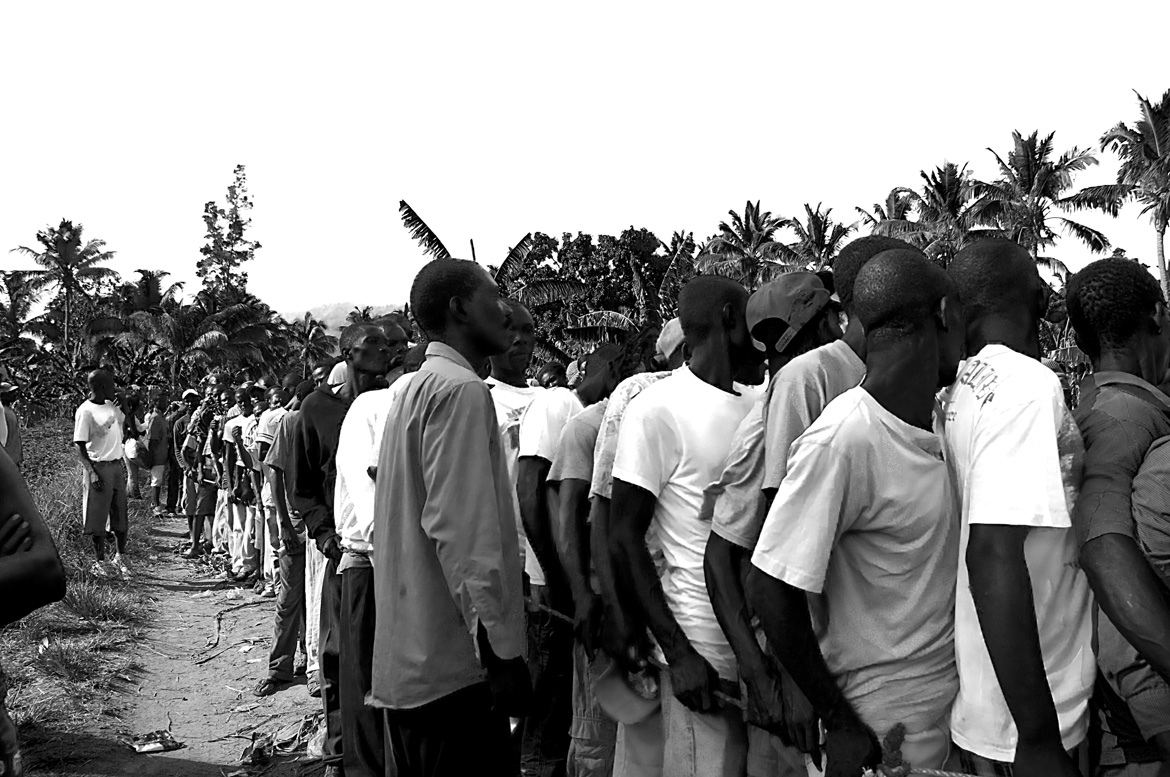 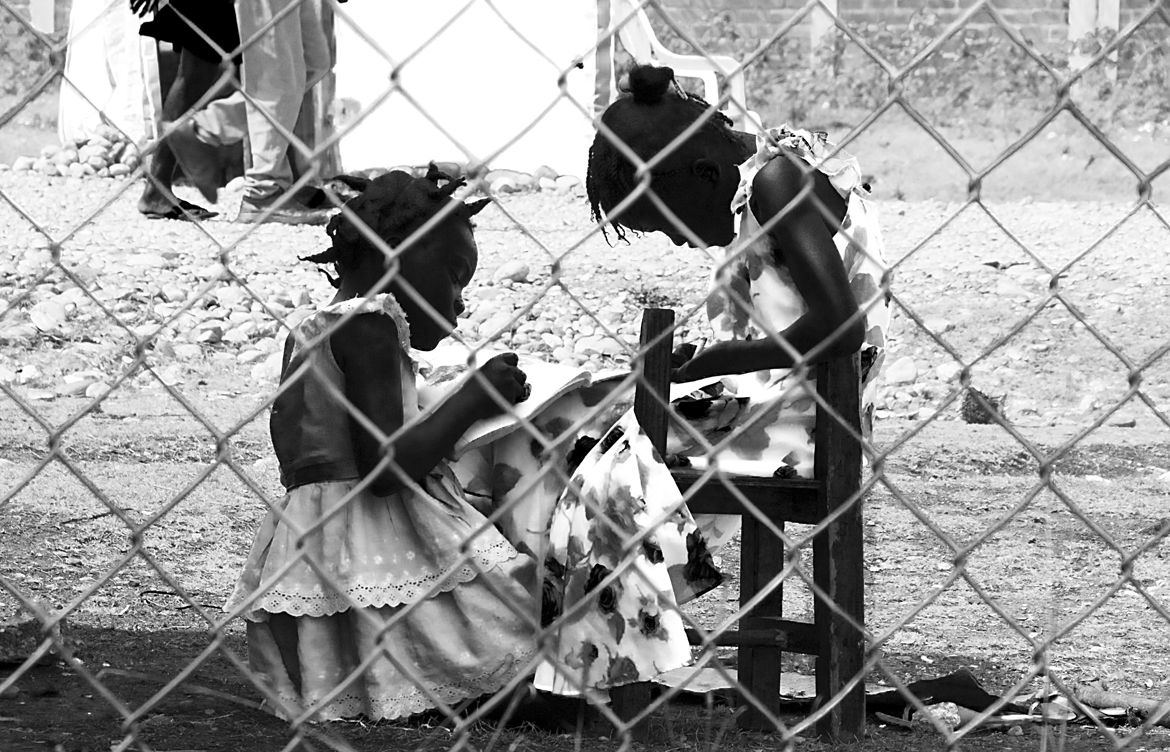 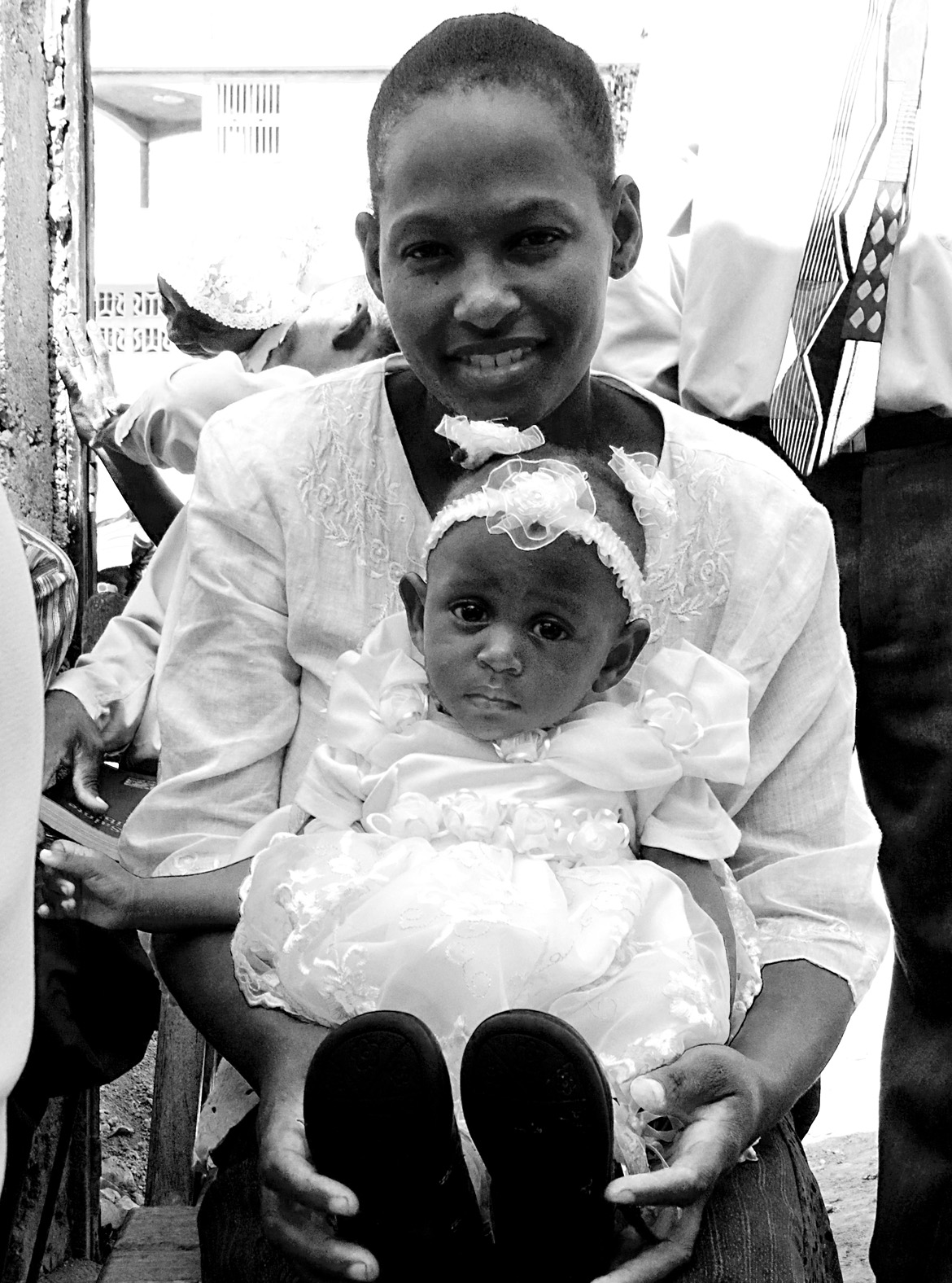 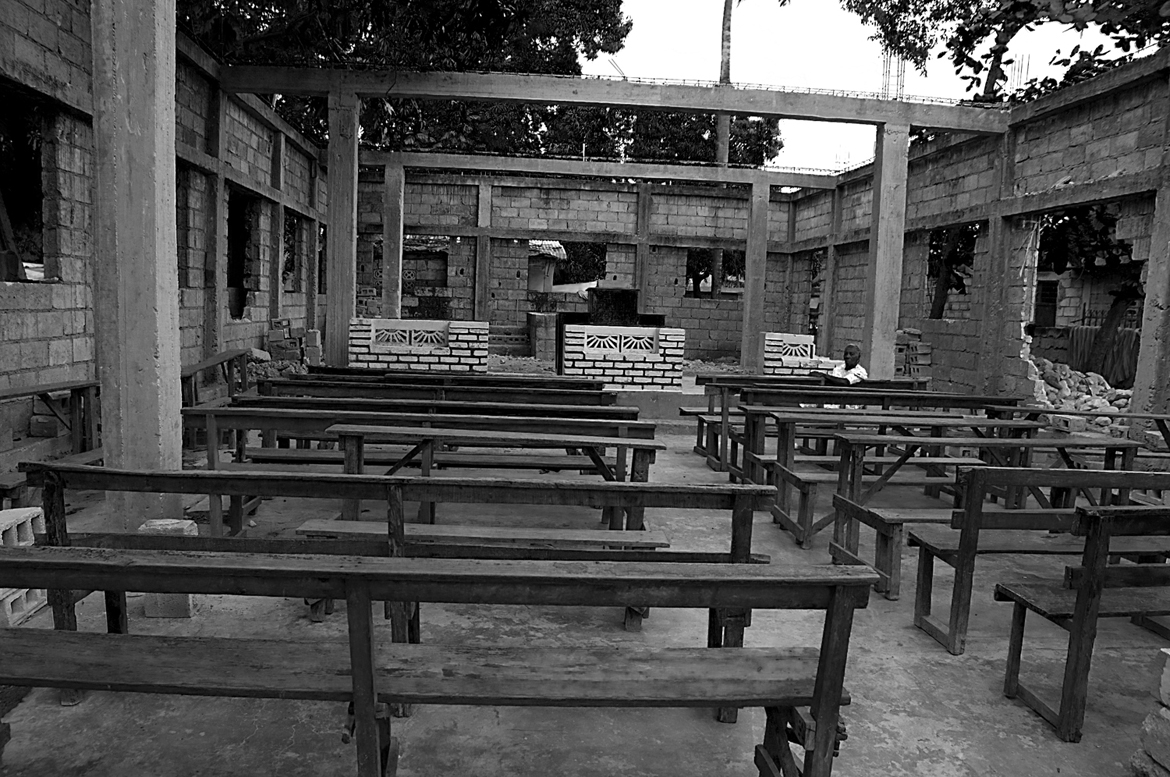 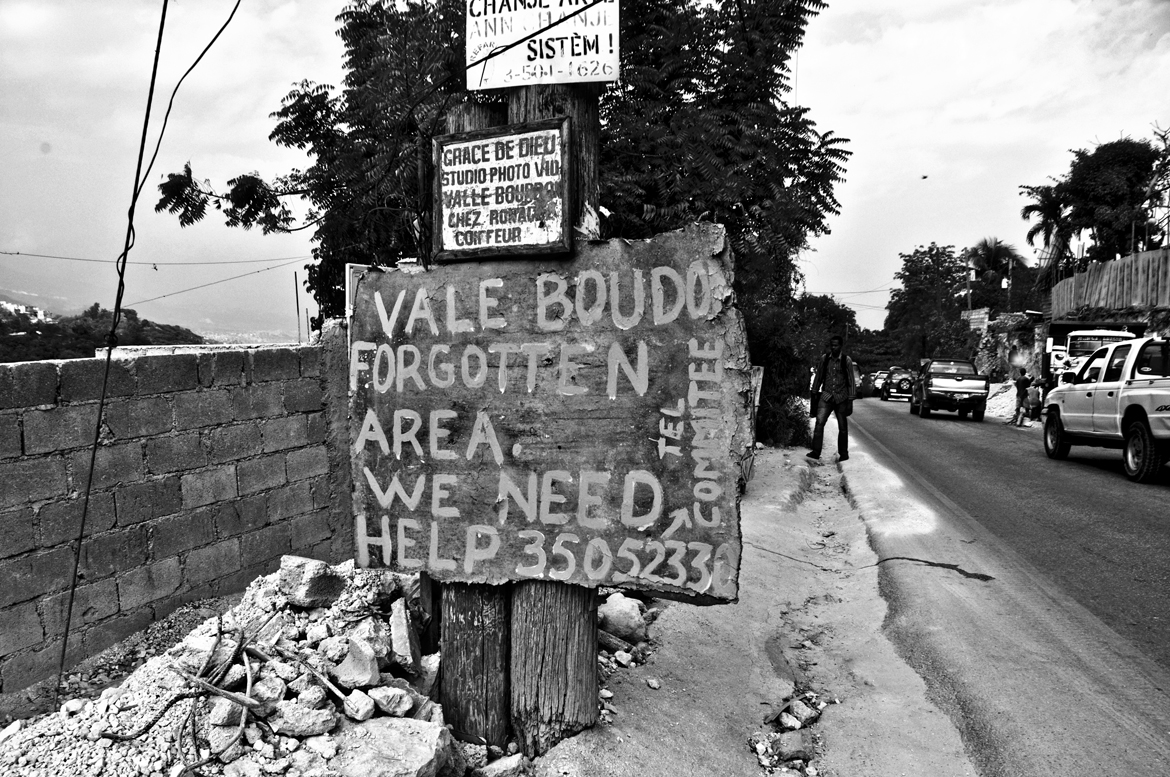 Suchitra Vijayan is a writer and a political analyst. A barrister and a human rights advocate, she previously worked for the UN war crimes tribunal for Yugoslavia and Rwanda. She co-founded and was the Legal Director of Resettlement Legal Aid Project, Cairo. Suchitra spent the last two years researching and documenting stories along the contentious Durand Line. She is currently working on her project titled Borderlands along India’s borders. The project is conceived as a travelogue chronicling stories along India’s borderlands, covering six of India’s border with Pakistan, China, Nepal, Bhutan, Bangladesh, and Burma. A part visual anthropology and part an attempt at understanding the Indian state, its pathologies and the fringes it governs.

Literature by Kevin Mwachiro
Once Upon a Night
Opinion by Anna Arabindan Kesson
What is Tamil for Loss? Remembering the Sri Lankan Civil War
Opinion by Jehan Bseiso
No Search, No Rescue: Support and Empathy is a Radical Action
Art by Taylor Miller
South, and by the Sea: Palestine and Arizona
Reviews by Grégory Pierrot
Black Panther, Representation without Taxation
videos by
An Evening of Poetry from the Horn of Africa
Reportage by Naomi Cohen
Pelileo: The Ghost Town That Was Never Haunted
Reportage by Kate Bartlett
Srebrenica's Battle for Truth, 22 Years On
Poetry by Laurence O'Dwyer
Poems from the Equator
Opinion by Kate McCabe
Refusing the Silence of the British State
Like any of the articles? Support our work.
Donate Now